This Tuesday night, The Flash wasn’t the only superhero sporting a lightning bolt, as Black Lightning struck The CW. What did you think of the electrifying addition?

Both daughters are present when Jefferson is profiled and pulled over by police, then forced to get out of his car in an effort to identify a robbery suspect. When one officer pulls a gun on the girls and the other dismisses their dad without an explanation or apology, the powered alter ego Jefferson has kept hidden for nine years flickers as his anger rises, though he keeps it at bay. In the crime-filled city of Freeland, an accomplished and educated black man in a suit driving a nice car is still just a black man.

Jefferson regains his composure after the encounter and tends to his duties as Garfield High School Principal for a fundraising dinner. He is clearly in his element as the school’s leader, whether taking the stage to inspire his students or working the room to charm potential donors (and his ex-wife). He’s even friends with police inspector Henderson (Damon Gupton), who surprisingly has time to attend a fundraiser despite being overwhelmed with The One Hundred’s unyielding grip on the city. 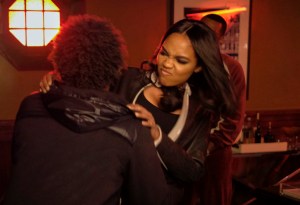 Meanwhile, Jennifer and a friend are at Club 100 rebelling in typical teenage fashion  (smoking, drinking) when the lamest guy in the club approaches her — and she flirts back (how strong was that weed, girl?). She (not) soon (enough) gleans that Will is a low-level drug dealer for The One Hundred — one who agrees to pimp her out to pay the debt he owes his boss Lala (William Catlett).

When Anissa clues her dad into Jennifer’s club-going, he races out to bring his little girl home. His anger and alter ego once again surface when he fights to rescue her, leading to shots fired and fists flying. After he gets injured in another racially-charged police encounter, Jefferson staggers to the tailoring shop of his longtime friend Peter Gambi (James Remar), to get his wound tended to.

Gambi has been encouraging his friend to get back in the game for years, because Black Lightning was created to give the community hope. Jefferson counters that the initial reason for suiting up was to kill Tobias Whale (Marvin “Krondon” Jones III), the man who murdered his father. Jefferson then makes clear that he retired Black Lightning because  the reasons to keep fighting/risking his life were in fact never-ending.

Lynn is waiting for Jefferson when he gets home, and he plays dumb about Jennifer’s dangerous night. Before she leaves, she asks him if Black Lightning is back… and he tells her no. In a flashback, Lynn finds Jefferson beaten and bloodied after he promised to leave that life behind, leading her to file for divorce. In the present, they do seem on the verge of reconciliation, but Black Lightning’s reappearance would certainly delay any progress that has been made. 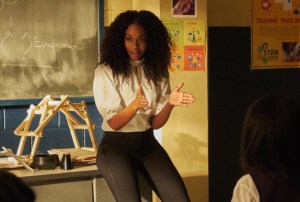 Jefferson’s next day is a trip — still healing from his wounds, dealing with school issues brought to him by his pushy assistant principal (fall back, Kara) and watching a video clip that Gambi sent of a store owner saved by Black Lightning. And that’s just the morning shift. Later, Will turns stalker and shows up at Garfield High after tracking Jennifer via Instagram. Anissa, a part-time teacher at the school, quite impressively kicks his butt after he grabs her sister and reaches for his gun.

After a tense talk with Will, Jefferson has an even more tense talk with his girls. He then slips away to meet with Lala, one of his former students, asking him to keep Will away from his daughters — especially since Garfield is supposed to be a “safe zone.” Lala agrees, but says that one day he’ll ask for a favor in return à la Vito Corleone. When Jefferson tries (but fails) to mediate a painful interaction between Lala and a kid drug dealer, that creates even more issues.

Later, Will and his crew walk into the school and kidnap Anissa and Jennifer at gunpoint. Henderson says he’ll handle it, but Jefferson can’t rely on the police when his daughters’ lives are at stake. He stops by Gambi’s to suit up and goes to the Seahorse Motel to save them. Lala berates and pistol-whips Will for his idiot mistake (kidnapping the daughters of Freeland’s “black Jesus”) then tells him to make the girls disappear.

Will and the girls run straight into Black Lightning upon leaving the hotel room. Anissa and Jennifer get to safety while Black Lightning zaps Will with enough power to hurl him into a car. Once the police arrive, the sisters give statements as their masked savior watches from the motel roof. As Lala is driving from the motel, Tobias’ henchmen snatch him up and bring him to their boss, who harpoons him and orders him to handle the improbably resurrected Black Lightning.

In the final scene, Anissa awakens from a bad dream. She goes to the bathroom and has a PTSD-induced panic attack. As her thoughts race, her hands begin to glow and she grips the sink, snapping it in half with metahuman strength.

All told, Black Lightning incorporates elements of black culture (hip hop, quotes from civil rights leaders, commentary from Roland Martin) while telling the story of a retired superhero who is compelled to resume crimefighting to save his loved ones, even though doing so is what fractured his family in the first place. Not all heroes wear capes, though — even among The CW’s many! — and Jefferson Pierce represents those everyday do-rights who honor their commitments, take care of their families and help their communities. This layered story, brought to life by a solid cast, is what gives the show authenticity and makes it relatable. (Recap by Tiffany Fletcher)

What did you think of Black Lightning? Tell us in the comments below! And if you want scoop/spoilers, email InsideLine@tvline.com!