There’s a scene in the pilot of Fox’s new medical drama The Resident where an idealistic young intern relentlessly pounds on the chest of a dying drug addict, eventually getting her heart beating again. Most medical dramas would stop right there , cue up a triumphant indie-pop song on the soundtrack and cut to commercial. But here, the intern’s supervisor takes him aside and tells him that even though his patient’s heart is beating, she’s been without oxygen for 26 minutes and is technically brain-dead. It’s a crushing punch to the gut. He saved her for nothing.

The last thing we need is another generically inspiring hospital drama… which is why it’s great that The Resident — previewing this Sunday at 10/9c (before moving to its regular Mondays-at-9 time slot) — isn’t that at all. Its doctors aren’t superheroes, or even particularly good people. Genuinely gripping and armed with a deep cynical streak, The Resident takes a hard look at the thorny ethical issues surrounding today’s health-care providers, and delivers a refreshing jolt of darkness to a genre that’s too often swimming in schmaltz.

Sunday’s premiere introduces us to the aforementioned intern, Devon (Halt and Catch Fire‘s Manish Dayal), who starts his first day at the hospital with wide-eyed optimism — and yes, we’ve met this character in just about every TV medical drama dating back to Noah Wyle in the ER pilot, at least. Granted, The Resident does have the swift walk-and-talks, dense medical jargon and quirky cases of the week we’ve come to expect from this genre. (On Devon’s first day, an obese patient’s gangrenous toe crumbles off in his hand.) But thankfully, the show also pushes past these clichés to something darker and more real. 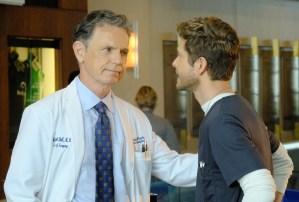 Take the hospital’s renowned chief of surgery, Dr. Bell (Bruce Greenwood): He has his smiling face plastered on billboards all over town, but behind his back, his doctors and nurses are snickering about his shaky hands. (In the pilot’s jaw-dropping opening sequence, he botches a routine appendectomy, killing the patient, and then bullies his nurses into covering it up.) Behind that smile, Bell is sinister and coldly pragmatic — he makes it clear that money and publicity are just as important to him as patient care — and Greenwood skillfully creates the type of icy villain we don’t normally get to see on hospital shows.

Bell’s main rival is hotshot resident Dr. Conrad Hawkins (The Good Wife‘s Matt Czuchry), and he’s no choirboy, either. On his first day as Devon’s mentor, Conrad is rude, dismissive and borderline racist to his new pupil. (“Were you affirmative-action at Harvard?” he sneers.) Czuchry walks a fine line between charismatic and obnoxious here, and Conrad’s reputation as a difficult genius is a little tiresome. (“Yes, he’s a jerk, but he gets the job done!”) But the Good Wife alum brings a rugged antihero edge to the role, and Conrad’s ethical debates with Dr. Bell, where he stands toe-to-toe with his superior and challenges his decisions, are a highlight: heavyweight verbal sparring matches that just about draw blood. 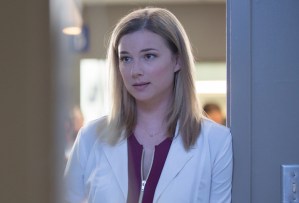 These compelling wrinkles that The Resident adds to the hospital-drama genre allow us to overlook a few nagging flaws. Devon, too bland by half, is the show’s least interesting character. It’s nice to see Emily VanCamp as nurse Nic, but we know from Revenge that she can handle a lot more complexity than she’s given here. (Is Nic just there to smile and give Conrad pep talks?) Shaunette Renée Wilson gets off a few good deadpan lines as Nigerian surgeon Mina, who’s a whiz with a scalpel but has zero bedside manner, but otherwise, the show is largely humorless. Plus, Episode 2 brings a mass infusion of new characters, including an oncologist played by Providence vet Melina Kanakaredes, that leaves the cast feeling overcrowded.

But two episodes in, The Resident still shows plenty of storytelling potential, with real tension and intriguing character dynamics to dive into. It doesn’t flinch at showing how our health-care system is run like a for-profit business — an ailing congressman is able to cut the heart-transplant line; a comatose girl’s top-notch insurance is a factor in whether to keep her alive — or at exposing its doctors’ very human flaws. Not all TV doctors have to be perfect. In fact, it’s a nice change of pace to spend a few hours with some who aren’t even close.

THE TVLINE BOTTOM LINE: With a strong cast and gripping storylines, The Resident brings a welcome hint of darkness to the hospital-show genre.