The crackle you hear is Black Lightning about to strike primetime TV.

Based on the DC Comics character created by Tony Isabella with Trevor Von Eeden, executive-produced by Salim Akil and Mara Brock Akil (Being Mary Jane, The Game) and starring Cress Williams (Hart of Dixie), The CW’s latest superhero series is different from its Arrowverse cousins in multiple ways — first and foremost, in that it represents the network’s first African American-led drama. In fact, Black Lightning is the focus of a “DC in D.C.” event taking place this weekend in our nation’s capital, where a world premiere screening at the Warner Bros. Theater at the Smithsonian’s National Museum of American History will be followed by a soiree at the National Museum of African American History and Culture‬‬‬‬.

Ahead of the series’ premiere this Tuesday, Jan. 16 at 9/8c (where it will lead out of The Flash), TVLine invited Williams to forecast the impact Black Lightning might make on the broadcast-TV landscape.

TVLINE | After I watched the first couple of episodes — and I said this earlier to [CW president] Mark [Pedowitz] — all I could think was that this is a very important show. Do you feel that way?
Yeah. It is in every sense of the word, you know — to the point that it makes me emotional. Like, when I watched [Episodes] 1 and 2, I don’t know, I was tingly. I was so emotional, because to see it really happening…. I mean, it’s historical in every sense of the word. It’s historical for the network having a black-led show for the first time in its history. It’s historical because of the network’s first black superhero. It’s historical because there hasn’t been a ton of African-American family dramas. There’s a tons of comedies, but there hasn’t been a ton of dramas.

TVLINE | One of the other things that separates this show from others like it on The CW is this guy is a grownup. He has a family and that influences his decisions. That makes it—
Completely different. I think it was interesting that when we announced that we were doing this and nobody had anything to see yet, because you’re on The CW and all they really had to go by was what was already on, their minds are thinking, “OK, we’re getting another [superhero show]… but now with black people.” And it was always asked, “Are you guys going to cross over?” But we knew, because we read the script, where we were going, and I was like, “This is completely different.” And now that we’re doing it and it’s out there in the world, people are seeing, “Oh, that’s what they meant. Yeah, it is completely different.” It’s just rooted in a different place.

It is really a family drama with powers in it. Down the line we start addressing real issues that, even if you take the superpowers out of it, people would go, “Oh yeah, I also have to deal with my teenage daughter and sex for the first time,” and, “Oh yeah, we have to deal with that, too,” but then there’s also powers and all this stuff on it, so it’s completely unlike anything else. 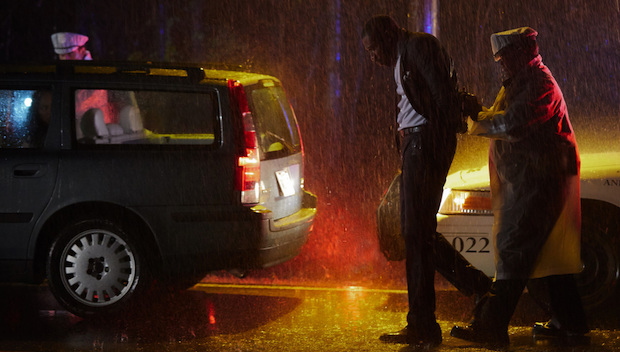 TVLINE | What did the producers (Being Mary Jane‘s Salim Akil, who wrote the first two episodes, and Mara Brock Akil) tell you they wanted to accomplish with the series from go?
I mean, from go it was about showing the truth. It was always kind of rooted in reality and truth. What’s great about what Salim wrote is that it was clear from on the page. I was getting like chills reading it. My wife was getting chills reading it, because we were like, “Whoa, this is a real story.” I mean, when you see that first episode, when the cops pull over Jefferson, I didn’t know where it was going. I’m reading it page-to-page like, “Wait, what’s about to happen?” The outraged person in me was like, “He’s he going to electrocute him” — and he didn’t, and it was like, “Wow, that’s amazing restraint.” It was really clear from the beginning — and then in getting a chance to sit down and talk to Salim — that what he puts on a page is what we’re doing. Like, you want to show truth and what it looks like to have powers, but you have to do life. What does it look like to be in a community like that and want to change it? It was clear that’s what he wanted to do.

TVLINE | I find it interesting that it’s been years since Jefferson and his wife Lynn (Christine Adams) separated, but they’re each still alone and not really attached to anybody else. There’s obviously something still really there between them.
Oh, most definitely. You see that, like, Jefferson still wears his wedding ring on purpose. As a matter of fact, it’s my wedding ring and I made a point of always, unless he’s fighting crime, wearing it, because even though they’re divorced he has not given up yet. He believes that they’re going to get back together.

TVLINE | There’s a very adult sexiness to their relationship and scenes.
Because they still legitimately love each other. It was only these circumstances that separated them. It’s not, “Oh, you’re a bad husband” or, “I don’t like you” or this or that. It’s just that she couldn’t live with [his superhero life] and he made a promise that he would stop — and then he broke the promise, and she was like, “I can’t do this anymore.” 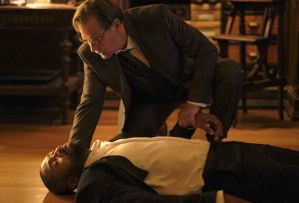 TVLINE | What do you enjoy most about your dynamic with James Remar, who plays Jefferson’s confidant Gambi?
James is a real cool cat. As a person, he’s such an amazing man, and like Gambi, he is loving and protective. We connect on so many levels — talking about jazz, talking about family — and we connect as actors. He’s like an actor’s actor, so we connect talking about the work. He protects me, really, in the scenes and out of the scenes.

TVLINE | Am I right that the Tobias Whale character (rapper Marvin “Krondon” Jones III) is going to trigger people?
Trigger a lot of people, I think. 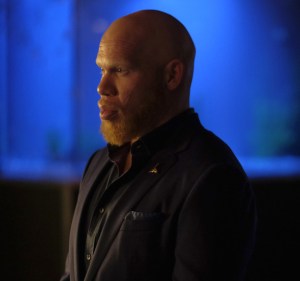 TVLINE | How would you describe his prejudices?
Well, it’s self-hatred. And again, it’s rooted in the truth, one that we as people of color know exists. In every kind of demographic there are people who go to the other side and have a bit of self-hatred through oppression, through abuse, and so yeah, he’s definitely going to trigger people. But what’s beautiful is that, as the series progresses, he’s not two-dimensional. People are going to see what has formed him.

TVLINE | I couldn’t believe what I was hearing out of this broadcast-TV character’s mouth, but I am also quite curious what led to Tobias being this way.
It’s going to be interesting. I don’t want to give anything away, but you’re going to see some similarities in some of Tobias’ story and Jefferson’s story, as far as backstory. Obviously they’re two different people, but with different nudges and lack of support one person goes one way and one person goes the other. So, we’re going to see that and it’s not just black and white, like, “Oh, he’s a bad guy” — not to the point where people hope Tobias wins! But you will gain a deeper understanding for him.