CBS’ Hawaii Five-0 this Friday at 9/8c casts new light on a dark corner of Lou Grover’s past, when an uxoricide suspect is found crashed at an intersection, with gun in hand and poised to end his own life.

Happening upon the scene with son Will in tow, Grover takes control of the delicate situation. In doing so, recounts to the desolate, suspected killer (played by Devon Sawa) — with new, disturbing details — the incident from his own past, first cited in Season 4, that led him to put Chicago in the rear view mirror.

TVLine invited Chi McBride (who appears in a PSA for the National Suicide Prevention Lifeline at the end of the episode) to open up about this latest dramatic deep-dive into Grover’s past… and then lighten things up by seguing into an anecdote about the casting of two of his TV wives.

TVLINE | It’s about once a season that we touch on a complicated piece of Grover’s past. For you as an actor, what made this week’s episode distinct?
Here’s the thing: a lot of people in Hollywood will tell you every single intimate detail of their lives. I’m not one of those people. But I had a very deep and personal connection with the subject matter. It affected me in a very personal way.

[Showrunner] Peter [Lenkov] and I have an extremely symbiotic relationship. He has shown me a great deal of respect, and I feel the same way about him. We have a mutual affection for each other, and we are able to connect on a really intimate level in terms of who Grover is, what this character is about. Peter brought in a lot of haunted past kind of ingredients to this character, and with these kinds of episodes — like the thing with the character of Clay Maxwell, that Mykelti Williamson played, and that whole thing — he just really dialed it in. Those are the times when it doesn’t feel like you’re working.

TVLINE | I was going to say — regardless of what you might have been promised when you first joined the show, you perhaps have come away with more than you expected, as far as true character work on a procedural.
From the very beginning, my dealings with Peter have been exactly what it is. He specifically wanted me to join the show, and he had these kinds of things in mind I believe from the beginning. He really accepted my input wholeheartedly, and we’re pretty much on the same page about everything. I wanted to show a family man, a man who didn’t have kids like you see elsewhere on TV. You look a families on TV today, man, and every kid’s a wise-ass, the guy hates his wife…. [Laughs] All these antagonistic relationships. Call me old-fashioned, call me corny or whatever, but I think that the entertainment media can sometimes be a good way to influence younger people who are coming up, to show them how life can be. There’s been this dystopian trend in projecting the family unit, and I didn’t want to do that.

TVLINE | No, with Grover we see a father looking out for his kids, sometimes ruling with a firm hand. And typically the kids listen to him.
When we first cast Chosen [Jacobs as Will], when Grover’s family was on the run, he got the idea to ad-lib some wise ass comment to me — on like the first scene we did together. I took him aside and said, “Yo, call your mother over here…,” because he came with his mom. I said: “Say to your mother what you just said to me.” He said it and I looked to her and said, “What would happen if he were to…?” “I’d knock his block off!” I told him, “Anything you wouldn’t say to your mother, you don’t say to me.” We’re not showing that; we’re showing this.

TVLINE | Back in Season 4, when we first brushed up against this bit of Grover’s past (he failed to talk a father out of shooting his young child and then himself), did you have an idea that there would be this additional aspect to it, about how dark a place it sent him?
No. No. I didn’t know what went on, or where it went. I knew that it haunted him, and it was the reason that he left [Chicago]. But I never even contemplated that we would address it further. On a lot of TV shows, you see a powerful episode with a couple of loose ends, but there’s never quite enough meat on the bone that you really miss it. But with this character, Peter’s always had those kinds of things in mind, like with the whole Clay Maxwell arc.

TVLINE | Talk about Devon Sawa. He did not have an easy part to play.
No, he didn’t, and he was wonderful, I thought. He’s a really, really fine actor, and he’s a nice guy. When two people have the same objective, to make our work as brilliant as possible, in this the kind of episode, it becomes very, very easy, and he did an incredible job. It was just so natural our calls and responses to each other. 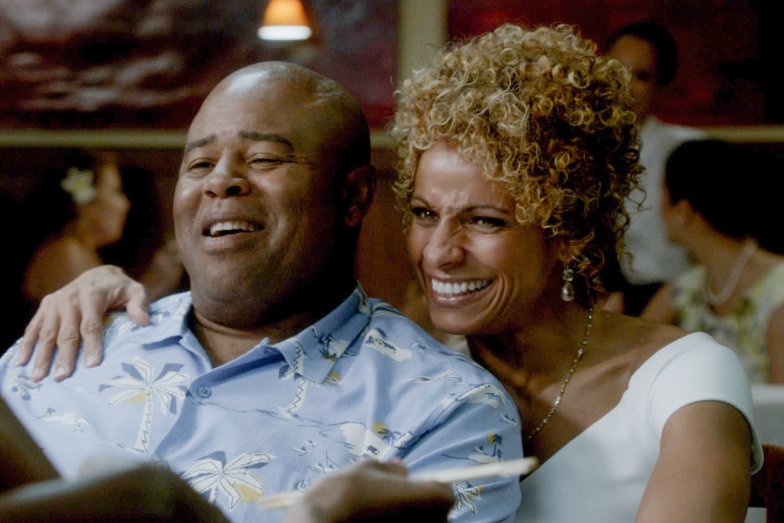 TVLINE | Meanwhile, I feel like every time Michelle Hurd pops up as Rene, it always so seamless, as if she is always there.
She’s the best — and I’ll tell you a funny story. [Chuckles] I was doing Golden Boy…

TVLINE | Oh yeah, I saw you on set during the hot minute that was around.
Yeah, we met there! And when it came down to my wife, I asked Nick Wootton if he would hire Valarie Pettiford (Being Mary Jane), because I knew that she would be really great and we have a certain level of chemistry that’s best for a role like that. And so… [Laughs]… we later did an episode of Golden Boy where Michelle was a guest star, and when I walk on set and meet her for the very first time — I knew who she was, but I’d never met this woman before in my life — the first thing she says to me is, “Hmmph. Valarie Pettiford, huh?”

TVLINE | Word gets around, man.
I looked at her and I said, “You mad?” And she goes, “That’s OK.” She then runs her hand from the side of her face down the side of her body and says, “You’re just gonna miss out on alllll this” — and we had a good laugh about it. So when it came up about who would be playing my family [on Hawaii Five-0], I asked for Michelle Hurd, because—

TVLINE | You owed her at least a couple of trips to Hawaii.
Lou is in love with his wife but he’s scared of her. There’s a line from when we were in the jungle, and I said, “You’re stronger than me. Don’t believe me? Ask the kids, they both know I’m scared of you.” That’s the dynamic I wanted to play, and I thought Michelle would be perfect. So when she comes to set, I said, “You still mad about that other thing?” And we just laughed. “Would you rather be in New York freezing your butt off right now?” We have a dear friendship and a very deep respect for each other as actors, and the chemistry between all four of us is something I enjoy very much.

The other thing is she goes with the flow. When we were doing that scene [in this week’s episode] where she leaves to go to the grocery store, I said, “You know what? I’m going to say something to you and just go with me on it.” And when she was about to leave I said, “NeNe,” what I used to call her in high school. And like it was written or something, she looked at me and said, “You haven’t called me that in years….” She knew exactly what to do with it, to suggest, “There must be something wrong.” Those are the little things that give that relationship more teeth and more credibility.

I’ve been very fortunate to have worked with some really great showrunners — David Kelley (Boston Public) and Bryan Fuller (Pushing Daisies) and Peter — that really understand how to make good television, and give us enough of a lane that we can throw in little things like that and bat those things about to see if they give a scene more muscle. I’ve just been very fortunate that that was the case.