Stupid pet tricks are in David Letterman’s rearview mirror. The onetime Late Show host has launched My Next Guest Needs No Introduction, a new talk show for Netflix that puts the emphasis back on “talk.”

Letterman, who has thus far committed to six episodes (releasing monthly), began his latest venture by sitting down with former president Barack Obama. Their discussion, while political, was not so much focused on his successor Donald Trump. In fact, 45 was only mentioned by name in a remote segment that excluded Obama (but more on that in a bit). Instead, the conversation delved into social inequality and the bigger issues that plague our democracy.

“Let’s just say there is a democracy, and the voting process is being monkeyed with by foreign countries… Hypothetically, what is more damaging to that democracy: Would it be the diminishment by the head of the democracy of press, or would it be somebody screwing around with the actual voting process?” Letterman asked.

“One of the biggest challenges we have to our democracy is the degree to which we don’t share a common baseline of facts,” Obama responded. “What the Russians exploited, but it was already here, is [that] we are operating in completely different information universes. If you watch Fox News, you are living on a different planet than you are if you listen to NPR.”

Letterman, who himself has shied away from social media, asked Obama about its significance in the democratic process, given the role it played in both his own 2008 campaign, then again during the 2016 election: “I had a very optimistic feeling about it,” he answered, but “I think what we missed was the degree that people who are in power — special interests, foreign interests, etc. — can manipulate that and propagandize.” 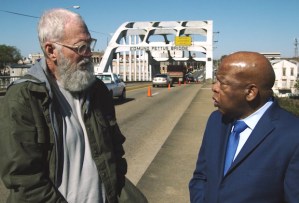 Perhaps even more impactful than the Obama interview itself was how it was interwoven with a supplementary discussion between Dave and revered civil rights activist John Lewis. The host joined the congressman for a walk across Edmund Pettus Bridge in Selma, Ala., recounting the events of the Bloody Sunday march and how it “carried America across that bridge” and allowed for a President Obama. It was during this segment that Letterman first mentioned Trump by name, asking Lewis about the degree to which the current administration’s policies are a detriment to the eternal fight for social equality. In response, Lewis expressed grave concern. As pictures of both white supremacists carrying tiki torches and the women’s march appeared on screen, the politician conveyed the idea that we all play a hand in the future we want to see.

The conversation with Obama, while mostly dense, was not without moments of levity. For instance, Letterman asked about readjusting to civilian life, and contrasted Obama’s newfound hobbies with his own (“You’re hang-gliding, you’re climbing volcanoes, you’re wind-surfing, you’re wrestling sharks, you’re on somebody’s private island… and I’m at Bed, Bath and Beyond picking out hangers”). The two also bonded over fatherhood, leading Obama to share an already-viral anecdote about getting up on stage with the late Prince.

What did you think of Letterman’s Netflix debut? His one-on-one with Obama? Grade the series premiere via the following poll, then discuss the episode at length below.