Jennifer Lopez is coming back to Will & Grace… and delivering double the J.Lo.

The actress/singer will guest-star in an upcoming episode of NBC’s revival, the network confirmed on Wednesday, in a dual role. She’ll play herself, and also her Shades of Blue character, NYPD detective Harlee Santos. (The J.Lo cop drama is returning for a third season on NBC.) 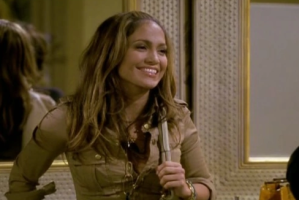 No further details on Lopez’s Will & Grace guest spot, but it’s not her first run-in with Will, Grace, Jack and Karen: She appeared as herself in three episodes of the original run, singing at Karen and Lyle’s Vegas wedding in the Season 6 finale and inviting Jack to be a backup dancer on her tour… before handing him off to Janet Jackson.

Will & Grace, which has already been renewed for another season, currently airs Thursdays at 9/8c on NBC — with Molly Shannon returning this week as Grace’s looney-tunes neighbor/rival Val Bassett.

Looking forward to a double dose of J.Lo on Will & Grace? Hit the comments with your reaction to the news.