TNT’s Major Crimes wrapped its six-season run — and brought the franchise born of The Closer in 2005 to a close — on Tuesday night, with Provenza & Co. closing in on the slithery, slipper Phillip Stroh. In the end, who was not left standing? And what changes did the team go through along the way?

In the wake of discovering Stroh’s latest kill, the MCD team got a lead from a passerby that Stroh is scampering around via motorcycle, and released (blurry) security cam captures of their prey to solicit public IDs. Tao then took left the Tip Line folder on their server for Dylan to find/open — and in doing so, allow them to trace his location. Amid all this, Wes used a costume shop’s cop outfit to prove that Rusty’s protection detail was deficient, so the lad and Gus were put under Provenza’s own watch.

Dylan meanwhile plotted to steal Stroh’s $15 million payday, only to discover via his hidden camera set-up that his partner had caught wind of the thievery and had strung up “fiancee” Ella to be hanged, until the money is returned. Dylan scrambled to do so (bumping into a server glitch along the way!), but managed to make it happen — just as the MCD and SOB closed in on the house. A pistol-waving Dylan was gunned down during the breach, after which Stroh, via the computer monitor, taunted the team/reiterated his targeting of Rusty, before slipping away.

Spying the countdown clock above Dylan’s command station, the team feared that an explosive had been rigged, possibly inside Ella’s apartment which they were about to storm. Tensions ran high as the counter ticked down, as they rescued the lass, until Tao’s suspicion was confirmed — it was a “dead man’s switch” rigged to release a tsunami of information about Stroh’s grand plan to the FBI and MCD. 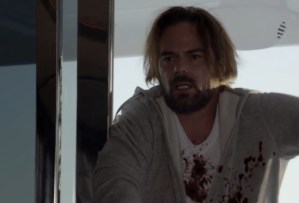 A false lead found on a “Travel” file furnished by Dylan suggested that Stroh was planning to jet away to Vancouver, but he was a no-show at the well-surrounded airstrip. Instead, a photo inside the (freshly murdered) Tammy Bechtel’s home led Provenza to realize that the “Ms. Bechtel?” on Stroh’s to-do list was referring to a boat docked at the marina outside. After ordering Rusty and Gus to stay put, Provenza went to check out the boat, but Stroh sensed that someone was coming. As such, he arranged it so that when Provenza “got the drop” on him, his back was to the lawman, and he dropped his knife to be officially unarmed, hands raised up. Sufficiently stymied, Provenza made the mistake of tossing his handcuffs at Stroh, to lock himself up. Stroh bent down to pick up the cuffs but actually reach for his ankle carry — but before he could, a quintet of bullets perforated the baddie, fired by Rusty from the stairwell.

To save Rusty from a heap of trouble, Provenza officially reported himself as the shooter, acting in self-defense, while Fritz relayed Brenda’s concern for all the kid has been through. The MCD team then convened at HQ, where a multitude of transitions took place: Sanchez bid Major Crimes adieu to work as a lieutenant for CI; Andy took Julio’s desk; Rusty announced that after he passes the bar he will be working as a prosecutor for the DA’s office; and Buzz was promoted to probationary detective.

As for Provenza, the once-grizzled detective who in earlier seasons seemed to have half a foot out the door? Working alongside the incredible family he has at MCD, he said at the close of a morale-boosting speech, “I could go on doing this job forever.”