Welcome to the South Side of Chicago, where Showtime’s new drama series The Chi paints a vividly colorful portrait of life on the streets.

Sunday’s series premiere — written by Emmy winner Lena Waithe (Master of None) and directed by Dope helmer Rick Famuyima — lays out a wide range of narrative strands for us to follow, all intersecting with each other, so let’s take a closer look at the five main characters we’re introduced to:

* Coogie (Jahking Guillory), a street-smart teen who sweet-talks a convenience store owner into selling him a soda (sorry, “pop”) and some jerky at a steep discount — and then feeds the jerky to a friendly dog nearby. 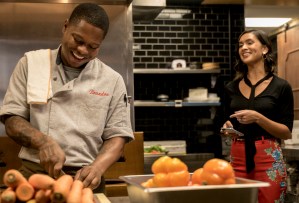 * Brandon (Jason Mitchell, aka Eazy-E from Straight Outta Compton), Coogie’s older brother and an ambitious prep cook who dreams of opening his own restaurant one day.

* Kevin (Moonlight‘s Alex Hibbert), a pre-teen who auditions for his school’s production of The Wiz just to spend more time with a girl he likes.

* Emmett (The Maze Runner‘s Jacob Lattimore), Kevin’s older brother and a slick ladies’ man who still lives with his mother. (He’s having sex with yet another random girl when Mom barges in… and invites the girl to join them for breakfast.) 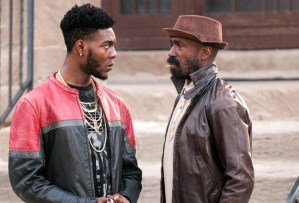 * Ronnie (Treme‘s Ntare Guma Mbaho Mwine), a grizzled old drifter with a healthy aversion to gainful employment. “The f—k I need a job for?” he asks. “So I can pay Trump taxes? F—k that s—t!”

When Coogie stumbles upon a dead body bleeding out in a dangerous neighborhood, he snatches the corpse’s necklace and sneakers — and that questionable act gets him hauled into the police station, where he strikes up a jovial rapport with neighborhood cop Rick Cruz (Power‘s Armando Riesco). He makes fun of Cruz’s “ugly-ass church shoes” and advises him to trade them in for some Timberlands. But things aren’t as jovial when Ronnie finds out his ex’s son Jason, who he helped raise, has been killed — and it’s Jason’s body that Coogie happened upon.

Brandon picks up Coogie from the police station, along with their abusive, alcoholic mom Laverne (The Wire alum Sonja Sohn), who yells at Coogie not to say anything to the cops. Ronnie, meanwhile, is stewing in anger and grief following Jason’s death, and sets out to find his killer. He asks around and hears that Coogie was seen around Jason’s body. Then when he confronts Coogie, he sees the kid wearing Jason’s necklace. Enraged, Ronnie pulls out a gun, firing a round into Coogie’s chest. He seems to instantly regret it, and runs off — but not before young Kevin gets a good look at his face. 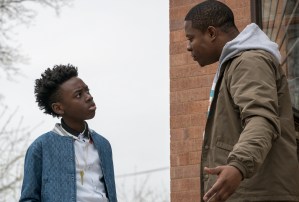 Now it’s Brandon’s turn to grieve, as he struggles through tears to eulogize his dead brother. (He’s technically Coogie’s half-brother, but he rejects that distinction: “I love him with my whole body, so I don’t see how he could be my half-brother.”) He pours his anger and passion into his cooking, and even scores a lucrative promotion at work — but he still wants to avenge Coogie’s death, just like Ronnie did with Jason’s. So he tracks down Kevin, who refuses to snitch… until 42 dollars and a bike changes his mind. He points out Ronnie as the man who killed Coogie, and then asks Jason: “Whatchu gonna do?”

It’s fitting that Sohn appears here, because The Chi feels like a spiritual descendant of The Wire, with a vast array of intricately drawn characters, a street-level realism and a vibrant soundtrack from the likes of Chance the Rapper and Run the Jewels. There’s humor and heart here, too, along with the grit — Shamon Brown is a highlight as Kevin’s “husky” pal Papa — and though the premiere gets a little sprawling at times, it feels like The Chi‘s story is just getting started.

Now it’s your turn: Give The Chi‘s series premiere a grade in our poll, then drop your thoughts in a comment below.