We know, we know: Do we really need another TV singing competition? Well, according to Fox, the answer is yes… and here’s why.

The Four: Battle for Stardom, debuting tonight at 8/7c on Fox, may have all the trappings of reality TV staples like American Idol and The Voice — futuristic lighting, A-list judges, dramatic glory notes — but the format is what sets it apart, The Four‘s producers and panelists told reporters at the Television Critics Association winter press tour in Pasadena. 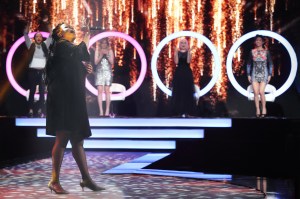 First, the show starts out with a quartet of aspiring singers — hence, the name — already in place, and then invites a host of challengers to audition for a chance to challenge those four… and possibly snatch away their coveted seat. “You start out with these four that have been picked, and they have something to lose,” host Fergie explains. “They have to defend that seat… It’s almost like The Hunger Games, a little bit.”

“This show sets the bar right away,” executive producer David Friedman adds. “It’s one thing to get to the top. It’s a whole other thing to stay on top.” If an auditioning singer impresses all four panelists — including Sean “Diddy” Combs, DJ Khaled, Meghan Trainor and Charlie Walk — that singer goes straight into a head-to-head sing-off with one of the four incumbents. Then the audience decides who wins, and who gets to keep that seat, so The Four mashes up the traditional elements of TV singing competitions — auditions, battle rounds and voting — each and every week.

The constant influx of new challengers helps keeps The Four fresh, executive producer David Eilenberg says: “Something new’s always coming around the corner.” Plus, the show is focused on “what happens the day after you win,” Diddy notes. The four panelists will help to guide the ultimate winner’s career at season’s end, with the winner also scoring immediate airplay as an iHeartRadio “On the Verge” artist.

In the end, it’s the “dramatic, combative nature” of The Four that separates it from the singing-competition pack, Diddy says. “It’s like Game of Thrones. If you want to chop somebody’s head off to get that seat, it has that vibe… Not literally.”