Assuming you weren’t convinced by the results of last May’s paternity test, The Blacklist used its winter premiere on Wednesday to prove once again that Red and Liz are indeed father and daughter.

Just as Red fled to Cape May, N.J., to drown his sorrows after Liz’s death (er, “death”), Liz uses her dad’s same coping mechanism on the heels of Tom’s untimely demise. Running away from your grief: a Reddington family tradition!

But rather than hide away at a Tri-State Area beach house, Liz takes a solo trip in the opposite direction during the atypical episode. We find her holed up in a remote cabin in Alaska, where it seems she’s been living for at least a few months. Her existence there is simple: She tells the locals that her name is Grace Talbot. She has a dog named Kate. She eats soup for dinner and works on odd jobs around the house, like fixing the generator when it goes down on a near-nightly basis.

In a series of flashbacks throughout the hour, we learn how and why Liz took up this new lifestyle. After months of painful physical therapy and tearful visits to Tom’s grave, Liz had decided she just had to get away — and there was nothing Red could do to stop her. After making her father promise not to follow her wherever she went, and leaving daughter Agnes in the care of Tom’s mom, Scottie Hargrave (hi, Famke!), Liz took off. Red advised her not to hide from her pain, to try and find some light in the darkness, but his efforts were futile.

Of course, it isn’t long into the hour before Liz’s quiet Alaskan life is disrupted. Not far from her cabin, she finds an injured man laying in the snow, freezing and near death. After taking him inside and tending to his wounds — save for the internal bleeding that will likely kill him in a matter of hours anyway — Liz is suddenly joined by four more men, who claim to be friends of Mike, the unlucky injured one. 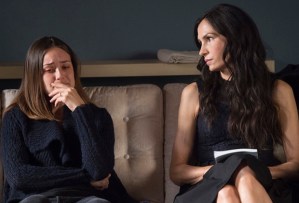 According to the group’s leader, Billy, the quintet was en route to Alaska for a fishing and hunting trip when their charter flight went down, and Mike’s life hangs in the balance as a result of the crash. (Liz, who’s still got razor-sharp profiling skills even after a 10-month coma, immediately begins quizzing Billy on his flimsy story. Why didn’t Liz hear the plane go down if it crashed nearby? Oh, it must have happened 10 miles away from her cabin, not two. How did the other men escape the plane unscathed when Mike is clinging to life? Oh, Billy and his friends must have gotten lucky. Hey, why don’t we go check the plane’s black box for a way to contact the police? Oh, uh… the black box was conveniently destroyed.)

Eventually, the truth about Billy and his men comes out: They’re members of the infamous Carlucci crime family, and they fully intend to kill Mike after they bring him home to their boss and get him to spill whatever information he gave to the Feds. And if you don’t believe that these Carlucci men mean business, look no further than the barn near Liz’s cabin, where they’ve already killed and stashed the bodies of Colin, a genial park ranger who clearly had a thing for Liz, and Kate, Liz’s precious dog. (Will I ever forgive the Blacklist writers for introducing an adorable pup and then gruesomely killing her off? Nope. I will not.)

Billy and his crew naively think they can kill Liz, too, given that she’s a woman living on her own and all. But in a sequence that plays out like an R-rated Home Alone — I half-expected Liz to swing a paint can through the doorway and ask the guys if they were thirsty for more — Liz reveals she was one step ahead of the men from the moment they arrived at her cabin. Billy likes to chew on ice cubes? She froze broken glass inside the cubes of his drink, ensuring his lungs get punctured with tiny shards. Another of the men likes to eat peanut butter straight from the jar? She laced it with drugs that kill him soon after his final spoonful.

One by one, Liz picks the men off, until it’s just her versus Billy and his glass-assisted breaths. He taunts her some, promising he’ll kill her eventually, but he doesn’t get a chance: With the help of a literal smoking gun, Liz shoots Billy and lights him on fire in the process. And then she packs up and goes back home — not to her cabin, her real home — leaving zero evidence that Grace Talbot ever even existed in Alaska.

Upon her return to the contiguous United States, Liz pays Red and Dembe a visit, informing them that she killed four men while she was away. And not only did she do it, but “I was good at it, and I didn’t lose any sleep over it.” (See? She and Red really are related.) But Red is more concerned about Liz than Liz is about herself, assuring her that one day, she will lose sleep over the people she’s killed, even if it’s not these four men. “Will you be able to forgive yourself?” Red asks his daughter… but we’ll have to wait a week for her response.

OK, your turn. What did you think of The Blacklist‘s return? Drop a comment below with all of your thoughts on this post-Tom outing.