Agents of S.H.I.E.L.D.‘s Phil Coulson is a director of sorts once again — meaning, Clark Gregg called the shots from behind the camera for this week’s episode of the ABC series (airing Friday at 9/8c).

In Gregg’s television directing debut, titled “Fun & Games,” an unexpected friend attempts to rescue Daisy when her life is on the line. TVLine invited the series vet to preview the mighty Quake’s “fight to the death” as well as detail the specific challenges he was handed as director of this episode.

TVLINE | As a director on the super-secretive Marvel’s Agents of S.H.I.E.L.D., are you handed a few extra keys to the kingdom? Do you get a bit more insight into where this season’s arc is heading, so as to best steer performances and subtext?
I did see my ID change to a slightly different color. [Laughs] We hadn’t aired yet [at the time I directed this episode], so no one had seen a stitch of any of it, but I got to watch the first four episodes in various stages of assembly. That was something, and that really gave me a sense of what we were trying to do and how it was coming together. And when I had a couple questions about “What is this heading towards so I can be sure I don’t steer it in the wrong direction?,” instead of people excusing themselves to get a cup of coffee, as they might do if I was just acting, there was a little bit more willingness to give me a sense of what was going to happen.

TVLINE | What unique challenges did this particular episode present for you as a director?
I’ve directed a couple of indie films that I wrote, so taking somebody else’s material within a very established if ever-evolving template and trying to honor all that and stay within those constraints, and yet be creative myself and do justice to the great episode that Brent Fletcher wrote… that was part of it. The other thing was that my little indies didn’t have giant fight scenes between people with powers, or “flying magical balls of destiny.” So to interact the super powers, the wire fighting, the martial arts… and then have a separate escape drama being attempted…. There was a lot going on. This was the first episode of television I ever directed, and it was not a small one.

TVLINE | I read on IGN that you accommodated input from fellow cast members such as Chloe Bennet, regarding what a character would or wouldn’t do in a moment.
Everybody has such a deep understanding of their characters and has lived with them so long — and in the case of Chloe and Iain [De Caestecker] and Elizabeth [Henstridge], especially, they’ve really grown up. They’re come such a long way and are such a big part of who these people are, that they always have really interesting perspectives on what’s going on with them and how they would react to something. And at the same time, they were really cool about hearing me out on the ways I wanted to push the envelope a bit, to take a moment into some slightly new territory. That’s a big trust exercise on their part, because I’m not one of the regular directors. I found it really moving the way they were willing to try stuff with me. 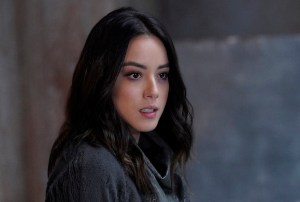 TVLINE | [FIGHT CARD SPOILER AHEAD] Of course we’ve been promised a “fight to death” for Quake, “Destroyer of Worlds.” What do you want to say about her opponent?
Florence Faivre [who plays Sinara] had done some acting but had not done anything like this — and yet it was very clear in the episodes I saw [in advance] that there was something really powerful and enigmatic about this character. There’s just something about her and her eyes. She’s terrifying and willing to kill at the drop of the hat, so there’s no way that you should be sympathizing with her or Kasius. But one of the surprises for me, as I directed and then started to edit the episodes, was how much you are weirdly involved with their story. You have to keep Sinara very formidable, because Quake… well, Quake is Quake. She can tear a building apart and, we’re starting to believe, can possibly destroy the world. To make them formidable adversaries to each other, to keep the fight exciting, to feel like it’s a fight Daisy could lose, was a big deal. And both [Chloe and Florence] really showed up. We’re talking 18 hours of just intense, physical stuff. They brought their A-game.