Now that they’ve wrapped their run of fresh episodes for the fall, let’s see how each network’s shows are stacking up thus far for the 2017-18 TV season, winding things down with Fox.

Listed below is the average Live+Same Day demo RATING for each Fox series. Beside that is the percent CHANGE versus each program’s previous average (or its time slot predecessor’s performance, if noted to the right). The NOTES section also reminds of any time slot changes to keep in mind when eyeballing up/down movements. Each program’s RANK refers to perhaps the most critical measure — how it is faring compared to other shows on Fox, since come springtime heads must roll to make room for shiny-and-newish pilots.

THE TVLINE BOTTOM LINE: Fox placed (a distant) second behind broadcast leader NBC this fall, yet suffered the steepest year-over-year decline (down 18 percent in the demo). The mighty Empire‘s ongoing erosion isn’t helping, softer NFL numbers may be feeding into the Sunday comedy slate’s slippage, and Friday (despite The Exorcist‘s creatively strong Season 2) is down a full 33 percent. On the plus side, moving Gotham to be paired with The Orville has markedly improved Fox’s Thursday profile (versus last fall’s Rosewood/Pitch combo) while keeping Monday pretty steady. And though at some cost to relocated Lethal Weapon‘s numbers, Tuesday also is steady versus last season’s line-ups featuring Scream Queens and then Bones‘ farewell run. 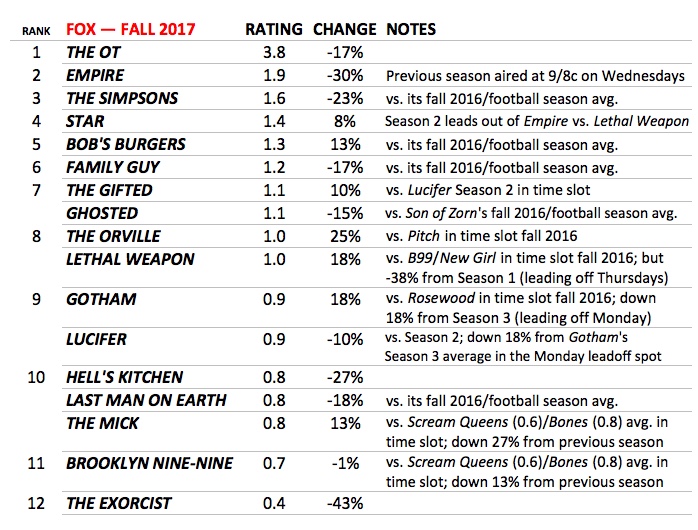