Now that they have completed their run of fresh episodes for the fall, let’s see how each network’s shows are stacking up thus far for the 2017-18 TV season, this time turning our attention to NBC.

Listed below is the average Live+Same Day demo RATING for each NBC series. Beside that is the percent CHANGE versus each program’s previous full-season average (or its time slot predecessor’s performance, if noted to the right). The NOTES section also reminds of any time slot changes to keep in mind when eyeballing up/down movements. Each program’s RANK refers to perhaps the most critical measure — how it is faring compared to other shows on NBC, since come springtime heads must roll to make room for shiny-and-newish pilots.

THE TVLINE BOTTOM LINE: Boasting TV’s highest-rated program, both the top drama and reality show, as well as the No. 3 comedy, it was no surprise that NBC dominated the first 12 weeks of the season. This Is Us thus far is up from its average as a freshman hit, while Will & Grace has revived Thursdays, bringing more eyeballs to the unsung Great News and setting Chicago Fire up for an easy 10 o’clock demo win. On the down side, you have a trio of non-Dick Wolf dramas. The Brave, perhaps crippled by time slot rival/breakout hit The Good Doctor, hasn’t been the apres-Voice hero NBC hoped it to be, while The Blacklist and Blindspot with their latest relocations have gone uncomfortably fractional. 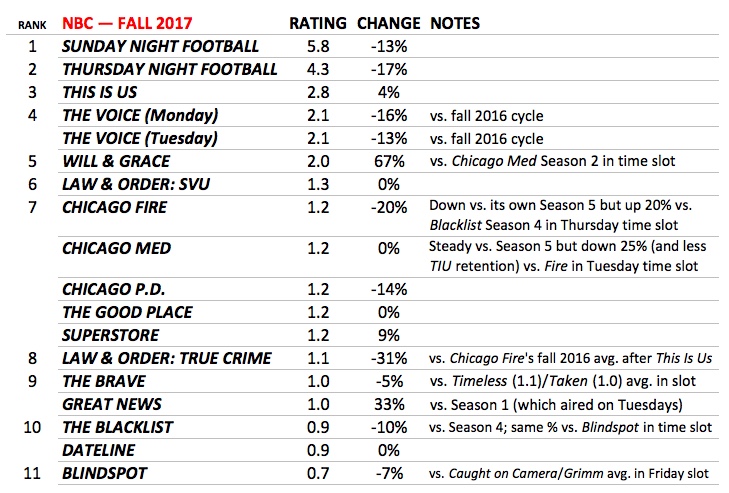