Now that the broadcasters have completed their run of fresh episodes for the fall, let’s see how each network’s shows are stacking up thus far for the 2017-18 TV season, now turning to CBS.

Listed below is the average Live+Same Day demo RATING for each CBS series. Beside that is the percent CHANGE versus each program’s previous full-season average (or its time slot predecessor’s performance, if noted to the right). The NOTES section also reminds of any time slot changes to keep in mind when eyeballing up/down movements. Each program’s RANK refers to perhaps the most critical measure — how it is faring compared to other shows on CBS, since come springtime heads must roll to make room for shiny-and-newish pilots.

THE TVLINE BOTTOM LINE: Young Sheldon‘s freshman year gets high honors, as TV’s top-rated (and most-watched) new fall series. (And before you cry, “Cushy lead-in,” know that Sheldon is delivering a remarkable 80 to 90 percent retention out of TV’s No. 1 comedy, whereas The Great Indoors last season didn’t even hold onto half its numbers.) On the drama side, S.W.A.T. may not have quite come out guns a-blazing, but it is outperforming Pure Genius‘ year-ago average, besting ABC’s How to Get Away With Murder in the demo and drawing the Thursday time slot’s biggest audience (edging out NBC’s Chicago Fire). On the down side, Criminal Minds‘ slight improvement of Wednesday’s 10/9c time slot is offset by SEAL Team falling shy of its predecessor; Wisdom of the Crowd‘s troubled launch is hurting Sunday’s average; MacGyver cooled a bit quickly; and Scorpion has curiously slipped a lot with only a slightly weaker lead-in. 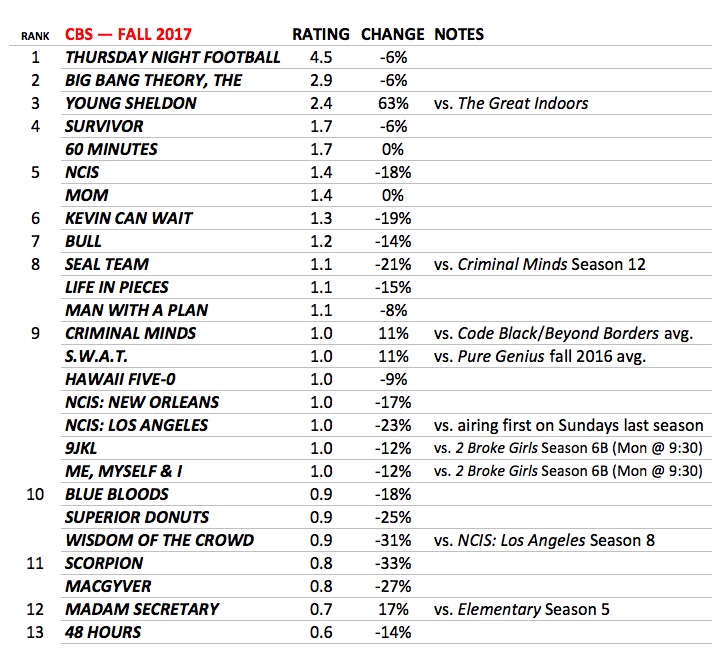