Let’s hope Kurt Weller knows a good couples therapist in New York. If the final minutes of Blindspot‘s fall finale were any indication, he and Jane will need some serious counseling in 2018.

After fearing for weeks that Roman would reveal to Jane what happened in Berlin, Weller decided he couldn’t live with the secret anymore and broke the news to Jane himself: Not only did he meet Jane’s long-lost daughter while he was in Germany… but he killed her.

That’s not to say Friday’s episode was a total bust for Weller. He and the FBI successfully took down Director Hirst and got one step closer to Hank Crawford, the apparent Big Bad of Season 3 (and father to Roman’s “love interest,” Blake).

But according to series creator Martin Gero, Weller’s confession to Jane will “rock them to their core” when the NBC drama returns on Jan. 12, and the aftershocks will last well into the new year.

Below, Gero teases what viewers can expect from the upcoming winter installments, including what Weller’s big reveal means for Roman’s master plan.

TVLINE | Is Weller telling Jane the truth when he says he killed her daughter? Or is this a lie that feeds into a bigger plan?
No, he’s telling her the truth. He’s finally coming clean. They’ve gotten closer than ever, and from Jane’s side, that’s been because they’ve been so honest with each other. But what’s shocking to her is this major reveal that he’s been keeping from her. Now, he has his reasons, and we’ll hear about those in the next episode. The story he’s about to tell is a pretty tragic one. But for Jane, first and foremost, the betrayal of not telling her is going to be a hard pill for her to swallow. 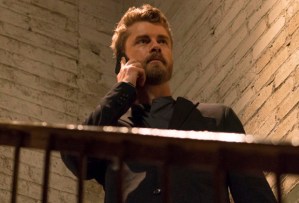 TVLINE | Weller has been so worried these last few weeks that telling Jane the truth would tear apart their relationship. Is he right?
He doesn’t want to lose her. He spent two years trying to find her, and the last thing he wants is for her to just walk away again, and that’s a big reason why he didn’t say anything. He was so worried that she would leave him if she found out. Why Weller did what he did and what happens — we’ll find all of that out. He’s not a bad guy. He’s not an evil person. But he made some poor choices.

TVLINE | Roman calls Weller at the end of this episode and tells him he’s off the hook; Roman isn’t going to tell Jane about Berlin, after all. Why does he say that? It’s not like Roman to be so generous.
He overplayed his hand. He still needs and wants Weller under his thumb, and Weller’s still valuable to him. By not killing Hirst, Weller essentially called Roman’s bluff. But then Roman’s like, “You know what? I’m still going to have you under my control, then.” That’s why Weller finally tells Jane. He just can’t do this anymore. He can’t be the unwitting mole for Roman, so he comes clean.

TVLINE | Will Roman find out that Jane knows about Berlin?
Yeah, Roman’s going to find out. He certainly won’t be thrilled about it, and will have to call an audible on his plan. But as you see by the end of this episode, Roman has created these tattoos to bring down this guy Hank Crawford, and while the team is working the outside of it, Roman has infiltrated the inside. Even though the team doesn’t know it yet, their goal is the same. They’re just going about it very differently. It’s a tandem attack on this guy. Everything that you thought was disparate shuffles together in a really satisfying way. And while we lose Hirst as our Big Bad, we’re now on to Hank Crawford, played expertly by David Morse, who I can’t believe we get to have on our TV show.

TVLINE | How will the Berlin story unfold for viewers? Will there be flashbacks to what Weller did?
Yeah, we’re going to do it very much like we did when we revealed Borden was the bad guy, the mole at the FBI. We spend the better part of an act just telling that story. Weller will tell Jane everything, and we’ll get a chance to hear him for the first time. And we’ll see a bunch of flashbacks about what happened and how. Our next episode is one of our biggest and most satisfying ever.

What was your reaction to Weller’s big secret? And how did you feel about the fall finale overall? Drop a comment below with all of your thoughts.