Catherine Langford is taking charge in the first teaser trailer for the Stargate Origins digital series. 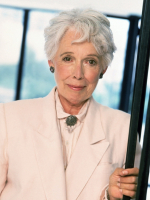 Debuting Thursday, Feb. 15 exclusively on the digital platform Stargate Command, the sci-fi prequel stars Australian actress Ellie Gall (Lifetime’s A Midsummer’s Nightmare) as a young version of the fan-favorite character (played on SG-1 by Elizabeth Hoffman, pictured right). The story follows young Catherine as she embarks on an unexpected adventure to unlock the mystery of what lies beyond the Stargate in order to save Earth from unimaginable darkness. Stargate Atlantis cast member Connor Trinneer co-stars as Catherine’s father, Professor Langford.

The 10-episode event series, produced by MGM’s Digital Group and entertainment studio New Form, will be directed by Mercedes Bryce Morgan and written by Mark Ilvedson and Justin Michael Terry. It’s an extension of the Stargate sci-fi franchise that began with a 1994 film and continued with Stargate SG-1, which ran for a combined 10 seasons on Showtime and Syfy.

More information on Origins and its digital home can be found at StargateCommand.co, which will offer free and paid memberships.

Press PLAY above for a sneak peek at Stargate Origins, then hit the comments with your thoughts on the Stargate prequel.