Remember how, as Season 12 of The Voice drew to a close, there was actual suspense about whether Chris Blue or Lauren Duski would be named the winner? Season 13 hasn’t been like that. For what seems like ever, Chloe Kohanski has dominated in both iTunes sales and our weekly TVLine polls. So Tuesday’s results show was really just a long, long wait to hear her victory announced. Unless, that is, we were in for one heck of an upset. (Spoiler alert: We weren’t.) And I know it’s often seemed like I have it in for Chloe; I really don’t. It’s just that, as she’s worked her way through the ’80s songbook, I’ve too rarely heard from her the intensity and promise of her Blind Audition, which you’ll recall was an absolute ear-opener, as raw as a freshly-scraped knee. But I digress. How were the performances that led up to Chloe’s coronation? Read on… 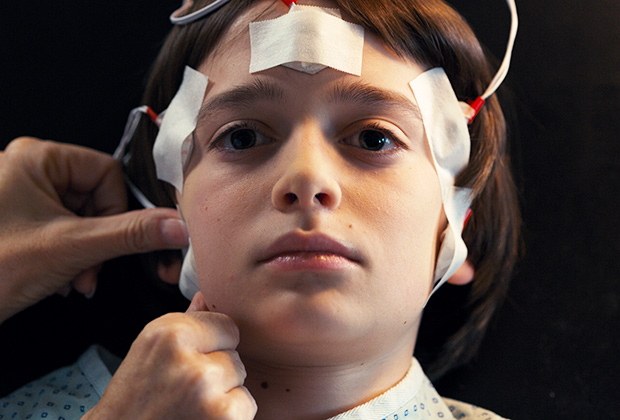 Adam Cunningham, Keisha Renee and Bebe Rexha, “Meant to Be” | The show got off to a so-so start with the pairing of Adam and Keisha, whose vocal styles meshed… er, about as well as you’d probably expect them to. Her soul-country phrasing and tendency to attack every note as if it was going to be her last just didn’t match up with his more traditional, laidback approach. But, once they were joined on stage by Bebe and about a zillion backup singers, things improved exponentially. In the end, it turned into fairly glorious noise.

Charlie Puth, “How Long” | To my surprise, this was not a song about the endless wait we’d have to endure to find out who won Season 13. What it was, was peppy and fun, and exactly the kind of number I hoped we’d be hearing later in the show from Season 12 winner Chris Blue (whose “Love On the Brain” I still listen to on the regular).

Addison Agen (Team Adam) and Norah Jones, “Don’t Know Why” | I’m embarrassed to admit that I was glad Addison was paired with Norah on this particular number, because as much as I liked the song when it was released, it was the last one I ever heard from the Grammy winner. (And yes, I do know she’s had lotsa other releases. I may need to get out more.) In any case, the match-up was a smashing success. I wouldn’t necessarily have imagined Addison doing this kind of light jazz-pop, but her voice wrapped around the song like a cloak of velvet around familiar shoulders. Gorgeous and classy. 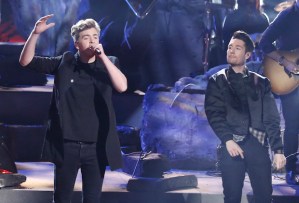 Noah Mac and Bastille, “World Gone Mad” | Whoa, that Bastille dude has one serious falsetto. Noah didn’t even try to get up there (perhaps wisely, if he couldn’t pull it off). This duet didn’t exactly set my world on fire, but at least with the pressure of the competition behind Noah, he looked and sounded like he was in his element and having a swell time.

Kelly Clarkson, “Medicine” | As if to say, “Listen to me, kids, I know what I’m talking about” ahead of her Season 14 coaching stint, the American Idol alum owned the stage with her performance of this rollicking number from her Meaning of Life album. Curious, though: She danced around less while singing than she did during her visit to The Voice this season as a key adviser.

Chris Blue, “Blue Blood Blues” | The world premiere of the Season 12 winner’s dramatic new song did two things very quickly: 1. It made me think of Prince. (Seriously, the s— Chris can do with his voice is freaking ridiculous! Like, from-another-planet ridiculous!) 2. It made me wish he was competing every year. He’s such a showman that, even with a number like this — which I’m not sure anybody was gonna be humming to themselves afterward — he leaves you shaken and stirred.

Brooke Simpson (Team Miley) and Sia, “Titanium” | When it was announced that Brooke would be joining Sia on her megahit, my mind immediately went to one question: Would the nine-time Grammy nominee pull a Miley and upstage Brooke, whose moment this technically was, or would she do a better job of sharing the spotlight? The answer: Yeah, ol’ Cruella hair mostly Miley’d it till about halfway through, when Brooke got to demonstrate what a perfect song this would have been for her during the competition.

Chris Weaver and Jessie J, “Bang Bang” | Performing as his drag persona Nedra Belle with some fellow queens and, of course, Miss J, Chris only reinforced my feeling that, if JHud was gonna keep just one guy in the soul lane, it should’ve been him, not Davon Fleming. By the time the number was over, there was more shoe-throwing going on than at a Payless fire sale. Shantay, you shoulda stayed, Chris! 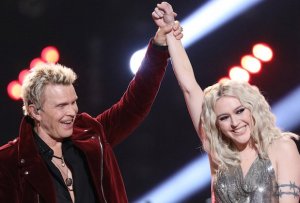 Chloe Kohanski (Team Blake) and Billy Idol, “White Wedding” | I’m such an ’80s-music fanatic, I can tell you the name of the vocalist who did the singing for Diane Lane in Streets of Fire and explain why the version of “Girls Just Wanna Have Fun” that was used in Night of the Comet was all wrong. But I do not get the show’s (Chloe’s? Blake’s? Someone’s!) determination to pigeonhole her as a retro cover artist. It’s just bizarre to me. Anyway, she acquitted herself nicely enough, though given this particular hit to perform, I would’ve liked to have heard more of the barbed wire in her voice that we all know she can put in it.

Demi Lovato, “Tell Me You Love Me” | This was hot — raw and powerful. In fact, almost raw and powerful enough to pique my interest even in what was this, the 11th, 12th hour of the show?

Davon Fleming and Jessie J, “Not My Ex” | At first, this was headed for train-wreck territory. Davon seemed to be struggling to find a key in which he could keep up with Jessie. Eventually, though, he settled into a groove with her, and especially when he sang a bit in his lower register, abandoning his shrieky falsetto, he gave a hint of the potential he’d always had. 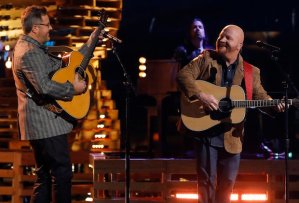 Red Marlow (Team Blake) and Vince Gill, “When I Call Your Name” | Here’s how good Red is: If I randomly tuned into the CMAs and heard him performing — and didn’t know any better — I’d assume that he was an industry vet with a shelf-full of awards at home. That’s how good he is. Truth be told, I even liked his vocal on Vince’s big hit better than I liked Vince’s.

N.E.R.D., “Lemon” | OK, this performance actually made me feel like an N-E-R-D. There was a lot of art with a capital A going on when former Voice coach Pharrell Williams’ group took over the stage for their blue-light special. Pretty sure I have never been cool enough to “get” this. I kept listening for a melody and hearing only beats.

Sia, “Snowman” | Another flawless vocal performance by what has to be the weirdest singer currently on the scene. I do, however, have a problem with her holiday album, which is titled grammatically incorrectly Everyday Is Christmas. It should be Every Day, not Everyday… Signed, My Seventh-Grade English teacher.

When at last we got the results…

So, what did you think of Season 13’s plus-plus-plus-sized finale? Are you happy with the results? Grade the season ender in the poll below, then hit the comments.