Any self-respecting fan of the Hallmark Channel’s many romance movies should be familiar with actor Andrew Walker. Perhaps you saw him woo a movie starlet in Date With Love. Or maybe he warmed your heart in Love on Ice. Or you were swept away by him in Bridal Wave. Or you watched him find A Bride for Christmas. Needless to say, Walker has starred in a lot of romantic tales for the network. But this December, you’ll have to tune into a different channel to watch the Hallmark mainstay’s latest love story.

Walker stars opposite One Tree Hill alumna Bethany Joy Lenz in his first Lifetime holiday movie, Snowed-Inn Christmas (airing Saturday at 8/7c). But the actor wasn’t even aware he was moonlighting on another network until it was almost time for the director to yell “Action!”

“I thought it was Hallmark all the way up until when I arrived in Winnipeg to shoot it,” Walker admits with a laugh. “Then I arrived on set and started talking with the director [Gary Yates], who I’ve worked with a couple times before, and he’s like, ‘No, man, this is Lifetime,’ and I was like, ‘Oh, OK. That’s nice. Switching it up a little bit. Nothing wrong with that.'” 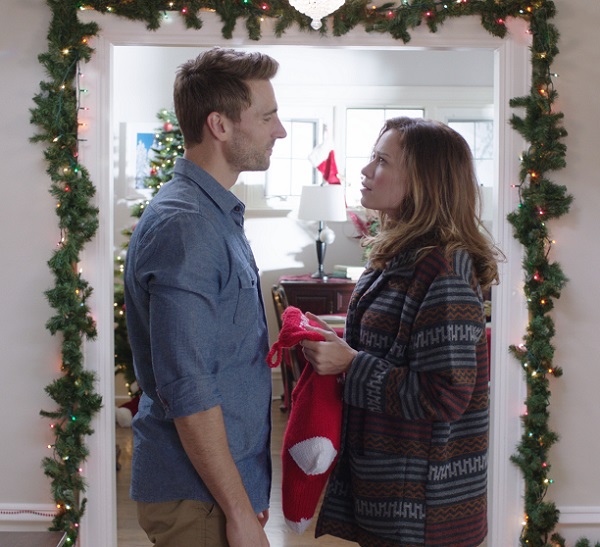 In the flick, Walker and Lenz play “writers from New York [who have] been assigned a piece in Colorado, and both their jobs are on the line,” the actor previews. “They get snowed in, have to do an emergency landing in Santa Claus, Indiana, and basically, they save Christmas, and they save Kris Kringle’s home by writing their piece on the historical landmark that they’ve, by fluke, been staying in.” And of course, it’s a story “about finding love when it’s right there in front of you all along and when you least expect it.”

A bickering will-they/they-totally-will couple? Check! A charmingly ridiculous plot about an establishment that needs to be saved? Check! A holiday miracle? Check! Despite having all those Christmas movie trappings, Snowed-Inn isn’t your typical festive fare, according to Walker. For one, he and Lenz worked to inject a lot of humor and physical comedy into the story, and were even able to rewrite scenes or craft completely new ones, to create “a great romantic comedy” with a “classic 1950s” vibe. “Hallmark has their brand, and they flirt with not wanting it to be too much of a comedy, whereas [with] Lifetime, we were able to really go there,” says Walker, who is also developing a movie for his frequent employer, Hallmark, as a producer.

Lenz even sold the network on the idea of a throwback musical number. “She looks at me, and she goes, ‘Andrew, you and I should pitch Lifetime to do the opening song for the movie,'” Walker recalls. “I was like, ‘Uhhhh, I don’t know if I can hang with you, Joy. But if you’re able to sell them on it, I will show up.’ And so she did!” (Check out the darling music video below.)