Before entering its long winter break, ABC’s Once Upon a Time left viewers with a chilling, new truth about the Dark Curse that deposited Regina, Rumple and others in Hyperion Heights with new identities.

In a bounty of flashbacks to the other realm, we learned that when Regina and Zelena — with Wish Hook, Ella and Jack offering backup — went to stop Drizella from casting said curse, they discovered that captured Henry had been fatally poisoned. And the only way to save him was for the new curse to be cast… by Regina.

Meanwhile in Hyperion Heights, Regina sought out/woke up San Francisco spin instructor Kelly aka Zelena so that they might combine their resources and save whammied Lucy, though to do so likely means undoing the curse — thus leaving Henry to die.

TVLine checked in with Once cocreators Eddy Kitsis and Adam Horowitz on the latest twists and what’s ahead in Season 7B (premiering March 2). 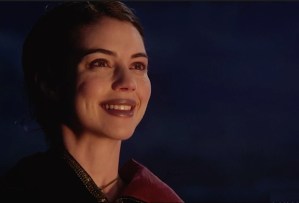 TVLINE | I knew there was a reason that all these weeks I was very careful never to write “Drizella cast the curse.”
EDDY KITSIS | You were right!

TVLINE | When in the course of hashing out Season 7 did you decide to make the casting of the curse a major mystery element?
KITSIS | Right from the beginning.
ADAM HOROWITZ | We felt that while there are some echoes and parallels to Season 1, we wanted to do a different thing. So it was a conscious decision when we did the premiere to not show who cast the curse, and make that an element of the storytelling for the season.
KITSIS | We also loved and were inspired by the 3B arc when we didn’t know who cast the curse, and it turned out to be Snow and Charming.

TVLINE | I went back and rewatched the scene at the bar where Regina (played by Lana Parrilla) awakens, and it’s completely recontexualized now. I’m going to embed that scene in my post mortem and recommend readers do same.
KITSIS | I wish you would, because then they’ll at least see that we plan these things. [Laughs] They can say, “They really do plan these things.”
HOROWITZ | Lana and Adelaide [Kane, as Drizella/Ivy] were so great in that scene. Those two are pretty wonderful together.
KITSIS | We always wanted to start this season in a way that the viewers are like, “Oh, OK, Lady Tremaine is the villain. I get it.” And then have it really be Drizella.
HOROWITZ | And that was a conscious decision to have [Ivy/Drizella] be a bit in the background for the first few episodes, giving you a little taste of her before she really came to the forefront. Adelaide was our “secret weapon,” and it’s been so much fun to unleash her in these last few episodes. 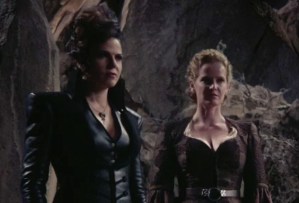 TVLINE | Coming out of fall finale, Regina and Zelena are faced with quite the Catch-22 — to save Lucy they have to break the curse. But if they break the curse, Henry will die.
KITSIS | Yes, and one of the things we’re excited about is seeing the two sisters work together in a way we haven’t really seen. They’re going to have to find that third way, hopefully. Toward that goal, they’re going to have to attack it on two fronts. Immediately you’re going to see in the spring premiere that they’re faced with a very large decision, as far as Lucy’s life hanging in the balance. That is going to come first, and at the same time they have to figure out a way to save Henry’s heart. They’re also in a land without magic, so we really tried to make it as hard as possible for them to figure out a third way. 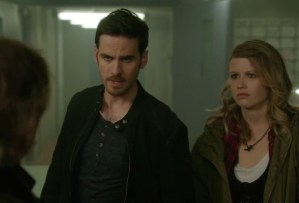 TVLINE | And will the trick for Rumple be to enlist the help of Rogers and Tilly without spelling out exactly what’s going on, with this Coven of Eight being in town?
KITSIS |  That is exactly what’s going to happen. We’re going to be seeing an arc with the witches that will involve of the three of them, where he is going to have to communicate that a coven of witches are back to create Hell on Earth — but he can’t use those terms. [Laughs] His job is hard, but it’s fun watching him motivate them towards his goals.

TVLINE | Does Rumple perhaps have the means to awaken Wish Hook and Tilly?
KITSIS | He doesn’t. We’re pretty much in a land without magic, and the only people that seem to wield it are people that were smart enough to come over awake. He doesn’t have the magic to wake them up, so he has to do it the old-fashioned way, through motivation.

TVLINE | Should we be wondering, or worrying, who will fill out the Coven of Eight? Or is it a bunch of red shirts?
KITSIS | You never know. What we’ll say is there is a giant curve ball that we will see thrown into the assembling of the Coven of Eight. Everyone will go into it thinking it’s just going to be Gothel assembling it and creating a plan, and there is a huge curve ball that comes into it that hopefully surprises people.

TVLINE | What’s next on the Henry/Jacinda front?
KITSIS | Well, we now know that if they have True Love’s Kiss and break the curse, Henry is going to die, so it’s going to be very tough, because these two clearly have feelings for each other. What we’re going to see is Regina is going to have to team up with her granddaughter to help save Henry. We’re going to see some Operation Save Henry in the second half of the season, with Regina and Lucy. 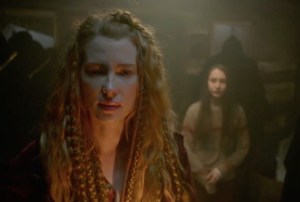 TVLINE | Lastly, what do you want to say about Gothel’s motivation? And why put all the magic into Anastasia instead of Drizzy, with whom she was already allied?
KITSIS | I think because Drizella is still under the assumption that she is going to get revenge and she’s in charge, and this is Gothel dismissing that. [Laughs] Drizella is no longer useful, nor does Gothel have a lot of respect for her; she’s very mercenary. As far as what she has in mind, that is going to be revealed, and it it is going to directly affect the happiness and the happy ending of another character. She is targeting someone very specifically, for a very specific reason. There may be a showdown coming!