There’s double trouble on Hawaii Five-0 this week, as the CBS drama enters the holiday break with not one but two episodes (starting tonight at 9/8c) .

The first hour continues last week’s storyline about McGarrett, Danny, Tani and Junior being quarantined after their exposure to and treatment for a bio-weapon. During that episode, a delirious, gunshot Danny has visions of the future — Grace’s wedding and Charlie’s graduation from the police academy included. Then, it’s Five-Ho-Ho-Ho as the team bumps up against some bad Santas.

Now midway through her well-received first season on the established procedural, Meaghan Rath previewed for TVLine the double header — and the revealing flash forwards within.

TVLINE | The first of this week’s episodes is Part 2 of the bio-weapon/quarantine storyline. But before we get into that, tell me: How intense was it filming that stormy yacht scene in Part 1?
It was actually really, really intense — probably one of the hardest things I’ve ever done, because it was an entire night’s worth of time spent doing just the storm, shooting on a yacht in the water. They had guys going around with jet skis making waves, the boat was rocking, there was so much water being dumped down on us and they didn’t heat it or anything — it was freezing cold. It would have been warmer just to jump in the ocean! So between takes to keep us warm they would put us in a hot tub with all our clothes on. We were all sort of banged up and bruised from that night.

TVLINE | I assumed they had you in a big tank somewhere.
The part with McGarrett getting hit by the wave was in a tank, but the rest of it was actually in the ocean. It was pretty amazing. It was so tough but I love that physical stuff. It reminded me of all the games my brother and I used to play when we were kids. Like, “You’ve got to rescue me in the ocean!” I had a great time doing it. 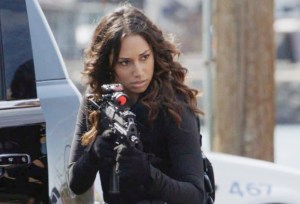 TVLINE | You’ve been doing a lot of running-and-gunning as well. And I’ve often said that Five-0 does the best daylight action sequences on broadcast TV. Any of the superhero shows, they stage most of their fight scenes at night and in dark warehouses where it’s easy to mask doubling….
It’s funny that you say daylight, because it’s nice there’s not that many night shoots on this show. The show is in its eighth season and everyone’s like, “We’d like to get home to our families,” so a lot of stuff is during the day. And they do a really great job of it. It’s sort of hard to picture what it’s going to look like when you’re in it because there’s so many effects and its so piecey the way that we’re shooting it. But when I actually saw that boat episode, I was like, “Wow!”

TVLINE | Now that everybody’s in quarantine, I guess it’s smooth sailing? No more drama?
Exactly. No drama left on the show. [Laughs] No, you can see in the preview for it that while quarantine is the place we’re supposed to be safe and totally closed off from the world, that’s actually not the case. That was one of my favorite episodes that was done so far. You see an episode like that and you’re like, “It’s such a contained episode, it’s going to be kind of boring,” but the tension is alive through it. It’s also fun because peppered throughout the episode are these flash forwards for all of us. It’s always fun to see these fantasy sequences.

TVLINE | I understand that during one of them, we learn that Tani winds up leading the Five-0 team. What did you think when you first read that?
I thought it was great. I think she’s the next McGarrett — they think the same way and they kind of are reckless.

TVLINE | That’s how [showrunner] Peter [Lenkov] first described her to me – “the female McGarrett.”
She’s so similar to him. It was a bit heartwarming to read that actually.

TVLINE | We’ve seen the photos of Steve and Danny as older, and then old, men. Did you have to get “aged” at all?
I did. They changed my hair in a big way and put some prosthetics on all of us, actually, for when it’s 14 years in the future. I’m not going to look that much different, but I thought it would be funny if they revealed she just had so much plastic surgery done. [Laughs] But for Junior (played by Beulah Koale), they for some reason went really all out with it. We all look 14 years older, while he looks about 40 years older. He doesn’t age well!

TVLINE | Too much time out in the sun or something.
The stress of the job is really getting to him.

TVLINE | This week’s second episode has Danny telling Charlie a Christmas “story” about some bad Santas. Is that one more on the lighter, fun side?
It’s a Christmas episode so it has those sentimental feelings about it, and we also have a bunch of guest stars who are military veterans. Some of them were actors and some of them weren’t, but it was nice spending time with these people. It’s pretty amazing what they’ve done, and it was nice for them to be able to come on and play something that they’ve experienced. And then there’s a big McGarrett Christmas party at the end. 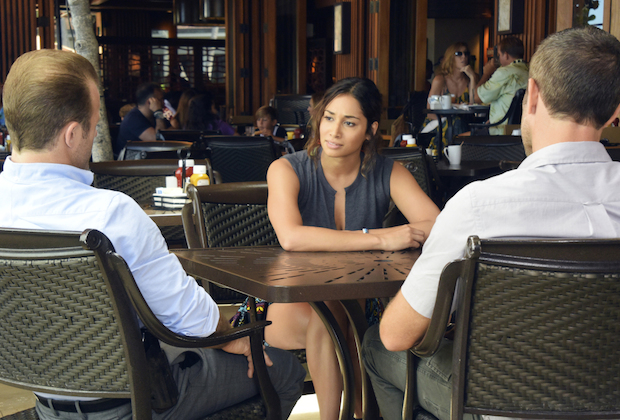 TVLINE | Looking back to the start of the season, I was worried for you and Beulah Koale because TV audiences famously “hate change” and all that, but from go you got a great reception. People took to you right away.
I feel really lucky. It’s a scary thing to come into a show as the new person, especially after such high-profile departures, but I think a lot of it had to do with the way they crafted the character in the episode where she first appears. They played all the right beats that I think people would respond to. I think it also helps that she’s nobody’s love interest. She’s her own person coming on as a member of the team. She’s tough but she’s also funny and silly sometimes. She’s well rounded and I feel really lucky that everyone sort of embraced her. I know how diehard these fans are, so I’m very honored to be welcomed in the way that I was.