This week on Agents of S.H.I.E.L.D., Quake, “Destroyer of Worlds,” was readied for the auction block — but there was no predicting who would be among the prospective buyers.

Kasius was practically giddy (or, you know, as giddy as he can be) after Deke delivered to him no less than Quake, the Inhuman believed to be responsible for Earth’s destruction. Yet laying eyes on this powerful prize — coupled as it is with the recent arrival of Jemma, so scar-free and unusually skilled — also gave Kasius and Sinara some concern, seeing as S.H.I.E.L.D. was prophesied to travel from the past to save the humans.

Kasius tested the women about how they came to the Lighthouse, asking Daisy to recount the story first, and she spun a version of their past that involved Mace’s death, Fitz quitting S.H.I.E.L.D. and the two of them, and them alone, being abducted by men in suits. He then invited Jemma to do same, knowing that she was unable to hear Daisy’s answer — but luckily, Daisy’s new Inhuman pal has not just the power of telepathy but is also able to plant thoughts, so he deftly “coached” Jemma. 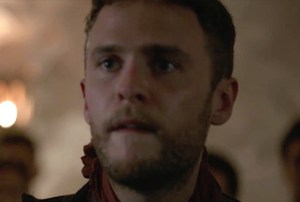 At episode’s end, Kasius went forward with the auction, having already uninvited snobby Lady Basha, touting the mighty Quake before the prospective buyers. But just as Kasius set the stage for an “exhibition” of Daisy’s skills, one masked buyer stepped forward to insist that such a weapon as Quake should instead prove herself in a “fight to the death” — and, upon removing his mask, we see that person is Fitz!

* Upon getting wind of some Kree tech on Level 35, Coulson and May begrudgingly let Deke — who they came to realized sold out Daisy — lead them to that high-security area. There, they learned that the Kree are breeding babies with DNA from Inhumans such as Daisy. Cornered by arriving Kree, the heroes fended off the blues, but Deke got stabbed. Coulson took him away to be tended to while May stayed behind to slug it out with Sinara (while dodging her balls), only to wind up on the losing end, her current whereabouts/fate unknown.

* In the course of defending his turning over of Daisy to Kasius, Deke told an interesting tale about the skin he himself in the game — that his “dead” Dad is the voice we’ve heard trying to contact Virgil from Earth’s surface.

* Grill tasked a begrudging Mack with being his new “enforcer,” sending him to collect a debt from a guy named Gunnar. Violence-averse Mack hoped to use a light touch, but when a misunderstanding led Gunnar to decry Mack’s unworthiness as a parent, the dead/lost Hope’s dad lashed out, pummeling the guy. Afterward, a distraught Mack opened up to Yo-Yo about his torment with regards to the two Hopes — including the difficulty he had coping with the first one’s death, and the pain he still struggles with, having “lost” the other one upon exiting the Framework.

What did you think of the episode “A Life Earned”?