The following contains spoilers from the Designated Survivor midseason finale.

ABC’s Designated Survivor closed the first half of its sophomore season by dealing President Tom Kirkman his most devastating, soul-crushing blow to date, in a tragic twist that has been on the books since last spring.

As this week’s episode neared its end, First Lady Alex (played by Natascha McElhone) brilliantly torpedoed Forstell’s investigation into the bribery allegations made against her, by making an opening statement — on the public record — in which she disclosed that the FBI Director’s fishing expedition coincided with his ramp-up for a senate run. Found out, Forstell promptly shut down the proceedings, giving Alex a big win…

…to be followed by a big loss, when on her way home from the FBI headquarters her Secret Service transport was T-boned by a truck, Michael Vaughn-style. Cut to President Kirkman (Kiefer Sutherland), who was at a hospital checking in on a newborn’s risky surgery, receiving a call about the accident. POTUS dropped his phone and crumbled to his knees, wailing as Secret Service agents rushed to his side.

TVLine spoke with Designated Survivor showrunner Keith Eisner about the when and why of this storyline decision.

TVLINE | It was May 14 when Kiefer was at the ABC Upfronts already teasing this “midseason event.” Was it as far back as then that you knew Natascha McElhone was leaving?
Yeah, we had been thinking about this moment for a very long time. It was a long time in the making and it leads us into sort of uncharted territory for a television show — which is a president [of the United States] who’s a widower and is basically home alone, raising two kids on his own. The most powerful person on Earth is now by himself [as a parent]. We find that very exciting as writers, to plot that surprising and unusual course.

TVLINE | What exactly set this in motion? Natascha had another opportunity she wanted to pursue?
Natascha had this great opportunity on a cable show (Hulu’s The First, set on Mars and starring Sean Penn) that she really wanted to do and which was going to limit her availability. It posed a question for us: Do we figure out a way to temporarily absent her from the show? Or not even absent her but have her involved on a lesser basis? And what occurred to us is we had an opportunity here to do something that TV hasn’t done before, which is show a president who is a widower in office. We loved that as a prospect. We love Natascha as an actress as well, so it was difficult to figure out the right thing to do, but once the opportunity popped up, it became clear that this is the road [to take].

TVLINE | A divorce — given that the Kirkmans didn’t have any real problems — would have been more improbable.
It’s interesting you should say that; we felt that, too. Separation, divorce…. It didn’t seem real. We haven’t shown them to have problems sufficient to generate a divorce or separation. Besides, that type of couple would probably soldier through for the presidency.

TVLINE | To avoid dealing with any of the above, did you for a second consider an uncanny recast, as daytime-TV often does?
That would have been an insult to Natascha, who we feel has created a great character and who did a terrific job. We would never just swap out an actress. 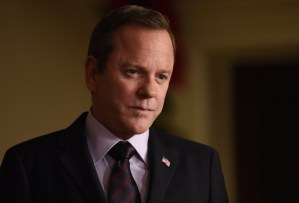 TVLINE | Having put Tom through so much in Season 1, was there a concern about heaping this on top of all that?
Yes. We don’t want the character to be Job. What we feel is that given the storylines that were told in the first season and the ones we’re telling now, it’s pretty organic for this president to continue to have a very unpredictable and difficult journey. The show is about the journey of an Everyman thrust into a position he wasn’t ready for, and that comes with all kinds of complications, including personal ones. Look, it’s difficult for him, but we think there is much to mined from how he does — or doesn’t — adapt.

TVLINE | I was going to say that in contrast to Season 1, the car crash was a more “random” tragedy — but now I wonder, might we find out it wasn’t random?
I think it has all the earmarks of randomness, but I’m not going to punctuate that now. People will have to tune in to see if that’s in fact true. But what’s interesting for all of us is that Alex’s death comes out of the blue. It wasn’t drum-rolled, it wasn’t set up, it wasn’t expected. It is true to life. As people saw in the episode, Kirkman didn’t have that last conservation with his wife, but that’s real. You are left to pick up the rubble afterward. One of the things that’s difficult to sort through is “you never got to say goodbye” or make peace with your loved one. That will be an emotionally difficult thing for him to grapple with.

TVLINE | When the show comes back after the midseason break (on Feb. 28), will time have passed?
Yes, 10 weeks will have passed — which is the same amount of time as will elapse between [the airing of] Episode 10 and 11. During that time, the president hasn’t simply moved past grief completely; that wouldn’t be real. We’re going to pick up with how he has been dealing with the loss of his wife and the mother of his children, his best friend. And it’s not an easy transition. Episode 11 deals with that uneasiness in a very interesting way, and the remaining part of the season will deal with it too, the consequences of being alone and what that means for him.

Want more scoop on Designated Survivor, or for any other show? Email InsideLine@tvline.com and your question may be answered via Matt’s Inside Line.