Lucifer‘s fall finale steered the Sinnerman story in an unexpected direction — one that cast Lieutenant Marcus Pierce in a whole new light.

Determined to find out what his freshly-blinded tormentor truly desires, Lucifer conspired with Chloe to sneak the Sinnerman out of LAPD custody and have him lead them to the location of an (allegedly) imperiled young woman. No dummy, Pierce got wise to the duo’s duplicity and tagged along, yet even that added manpower couldn’t keep Lucifer from absconding with his adversary.

Stealing away to one of his tony L.A. properties, Lucifer first had Maze make a run at the Sinnerman, but even Hell’s most vaunted torturer couldn’t make the guy crack. And when Lucifer decided to work a loophole and kill the Sinnerman, a human, himself — this costing him his wings and earning back his devil face — he couldn’t go through with it. Just then, Pierce and Chloe arrived, with the former felling the Sinnerman with a hail of bullets.

Later, after mulling assorted things professed by the Sinnerman before his death — including how he wanted to die, and it had to be at Lucifer’s hand — the devil made a date with Pierce. When the detective arrived at the penthouse, he was met by Lucifer with some verbal taunts… and then a dagger driven deep into his chest. Pierce slumped to the floor, only to, moments later (and to Luci’s relief), rise up and extract the blade from his chest, with little more to show for it than some wheezing. Lucifer then greeted the immortal being by his proper name — Cain. As in the world’s first murder, a human who was then cursed to walk the Earth for eternity.

TVLine spoke exclusively with series star Tom Ellis about this bombshell of biblical proportions, and how it will shape the frenemies’ dynamic when the Fox drama returns on Monday, Jan. 1.

TVLINE | Lucifer must have felt pretty darn confident about his theory, plunging that dagger into Pierce’s chest the way he did.
[Laughs] We did have fun with that scene. I don’t know how it worked out in the edit, but we did play a few beats of him having maybe some uncertainty about his play not working out. Like, “Please get up.” 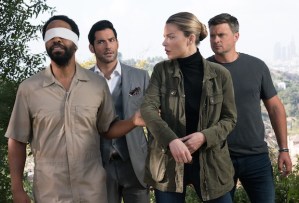 TVLINE | Before we get into how exactly Cain fits into the show’s mythology, my immediate question is: Who was the Sinnerman (played by Kevin Carroll) in all of this?
You find out a bit more in the next episode, but basically the Sinnerman was a protegé of Cain’s, and they hatched this plan together. You then realize that the Sinnerman went rogue and got carried away with the whole thing.

TVLINE | Does Lucifer have any preconceived notions about Cain? Is he sympathetic to his lot in life, as a human cursed with immortality?
As the second half of the season unfolds, he starts piecing things together. And there is a kind of affinity as he realizes that Cain has been trapped by this curse that Dad put on him, to walk the Earth for eternity. You realize that’s almost as bad as being in Hell itself.

TVLINE | How does this alter the dynamic between Lucifer at Pierce when at the precinct?
Lucifer threatens to tell everyone who Pierce is, and Pierce is like, “Good luck with that. You can’t even get them to believe you’re the devil!” Lucifer is a bit stuck with this knowledge, but then he decides to use Pierce to get back at Dad. Cain makes a deal with the devil, and that drives the first half of the next part of the season onwards. Lucifer’s goal is to get back at his dad and get rid of his wings, and Cain’s biggest desire is to die.  Lucifer decides he’s going to help him do that and defy his father by lifting the curse somehow. They have this kind of strange bromance for a few episodes.

TVLINE | So did Cain know and believe all this time that Lucifer was the devil…?
The other thing you find out in the next episode is that the person who has got all these files on the celestials and the supernaturals is Cain. He’s been keeping track of everybody coming and going on Earth. When he found out there is the devil and a detective who could make the devil bleed, he thought this might be his chance to find someone who could make him die.

TVLINE | It’s funny, the showrunners told me almost exactly a year ago that Cain is a character they wanted to bring on….
Absolutely. The world’s first murderer! It opens up a nice can of worms.