In The Gifted‘s fall finale, the stage was set for a major mutant rescue, until a triple threat of sorts arrived on the scene to make mayhem.

With Clarice, Dreamer, Andy and Lauren nabbed by Sentinel Services — possibly to be converted into Hounds — Lorna lobbies to launch another attack, but Caitlin and Reed balk. As a compromise, Marcos in the meantime sends people to scout out Sentinel Services and Trask.

The telepath Esme then “eavesdrops” on Reed and Caitlin before discreetly suggesting that this “human problem needs a human solution,” so maybe they should appeal to Agent Turner. After all, the kids in a proper prison is better than them being drugged pets, right? The Struckers concur and sneak out of HQ to visit the Turners, scary gun in hand. 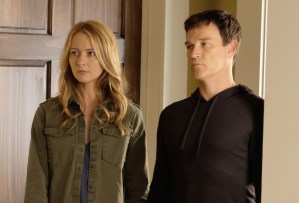 Jace and his wife aren’t very receptive to the Struckers’ argument, despite the parental “bond” they attempt to milk — until, that is, Paula gets wind of how her husband stormed the Strucker house to confront the two teens, gun in hand. After the Struckers leave, she hits a nerve by asking Jace: “What are you doing in our little girl’s name??”

Meanwhile at the way station, Esme “lets slip” to the others that Caitlin and Reed went rogue to talk to Turner, and then plants the seed that in success, a prison transfer might happen that night — one they could intercept.

At Trask, Campbell gets his hands on the Strucker kids, outfits them with special suits and  plops them into a adamantium-lined room to let fly with their combined power. Andy and Lauren at first refuse, despite some zaps to their shock collars. But when Campbell coldly shoots Dreamer dead, as the kids watch, they oblige him with a show, lest Clarice meet the same fate. And needless to say, the siblings do not disappoint, overloading the room’s sensors, shaking the lab’s rafters some and giving Campbell the data he needs to replicate the explosive power, as a “permanent solution” to the mutant problem.

But just then, Agent Turner shows up to question the legality of Campbell’s experiments and for the time being cart away any and all mutants. Outside Trask, Esme sneaks up on the guard booth with Marcos to gain some intel, before KO’ing Marcos. She then uses her ability to control the minds of Turner’s partner Ed, who unlocks all the mutant collars; the guards, who start gunning down one another; and then Ed again, to shoot Jace and then blow his own brains out. As the massacre unfolds, Andy, Lauren and the others exit the transport, where they are met by Esme… and two more Esmes. (Closed captioning labeled them “FROST TRIPLETS,” but as multiple readers not, they more evoke Marvel’s Stepford Cuckoos.)

“The fun’s just starting,” the trio announced, as we head into the brief winter break before the season’s final three episodes.

Want scoop on The Gifted, or for any other show? Email InsideLine@tvline.com and your question may be answered via Matt’s Inside Line.