Crazy Ex-Girlfriend‘s Paula went home for the holidays this week, and got a new Christmas carol stuck in our heads. (Just be careful who you sing it around.)

Friday’s fall finale saw Paula head to her hometown of Buffalo to take care of her ailing (and estranged) father. But after Rebecca volunteered to keep an eye on her dad, Paula was free to reconnect with her own Josh Chan: high-school boyfriend Jeff. (She apparently got a very good look at him back then, too, as we learned in the instantly catchy musical number “The Very First Penis I Saw.”) Jeff was still a charmer and tried to rekindle things with Paula, but she ultimately rebuffed him, realizing that Jeff was best left as a fantasy before happily returning home to her husband Scott.

TVLine chatted with Donna Lynne Champlin about this week’s deep dive into Paula’s past. Read on to get her take on Paula’s Outlander obsession, how the character of Jeff was almost very different… and how she managed not to giggle while filming that very phallic music video.

TVLINE | This episode was our first good look at Paula’s backstory. Is this happening now because Rebecca has dealt with her Josh Chan, and so it’s a good time for Paula to deal with hers?
It feels right, as an actor. Any earlier, it would’ve been too early. Rebecca is at a point now where she has realized that her Josh Chan was a fantasy, thus sort of planting the seed in Paula. Then they go home and she sees her Josh Chan, and she sort of does have a very condensed version of it: that whole romanticizing the man that got away. The more years that go by, the bigger that memory becomes, and the more perfect that person becomes in your mind. The “what if” game starts to crank into high gear. So it is sort of a microcosm of what Rebecca has discovered, which is: Everyone’s human, everyone’s three-dimensional… including Paula’s husband. 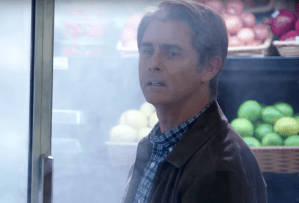 TVLINE | It was interesting that Paula ran into Jeff, and it’s not like he turned out to be a jerk. She just realized she doesn’t really want him anymore.
Which I loved! They’re totally different people, and she has grown. She has changed. She’s had her own life. The unanswerable question is: Was Jeff the right guy for her at that time? That’s one of the things she has to also let go of. That “what if” game is completely destructive… and pointless! She made choices, and she is a different person.

It’s funny, because there was a first run of the script where Jeff had married another girl from high school, and he was kind of a dick. He was a lothario, and Paula was friends with his wife, because they all went to high school together, and she learned that Jeff was a bad person, and a bad father. And I was so excited when, in the rewrites, that all went away. Because if he’s a jerk, that makes the decision for Paula to say “I don’t want to be with you” so much easier. And I love it when things are hard. There’s nothing wrong with him! [Laughs] It was just a fork in the road, and she went the other way.

TVLINE | It’s pretty perfect that she loves Outlander, too. Paula does seem like an Outlander fan.
OK, here’s the thing: I am actually a huge Outlander fan. And I saw the script, and I was like, “Who in the writers’ room knows that I’m an Outlander fan? I’ve never mentioned it!” I called [showrunner] Aline [Brosh McKenna], and I was like, “What’s going on with the Outlander thing? I’m so excited! Do you watch it? We have to talk about it!” And she was like, “Um… no.” It’s just so funny that it’s this random dart they threw at the dartboard, and they hit a bullseye without even realizing it.

TVLINE | And it connects so well, too, with her sort of going back in time to see this guy…
Totally! You’ve got the husband that’s a decent guy, who’s always there but kind of boring. And then you’ve got, you know, Sam Heughan! It’s hilarious. 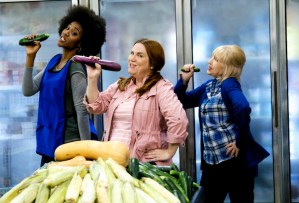 TVLINE | Paula’s musical number “The Very First Penis I Saw” was a definite highlight this week. I have to ask: How many times did you giggle while filming that?
Well, when we shoot those videos, we are under such a time constraint that it’s almost like you don’t dare ruin a take. You just don’t have time to f–k around. But in the first rehearsal, I swear to God, I was bent over. When we got to the produce section… it’s funny because we had some choreography that Standards & Practices were like, “No, can’t do that.” And we were like, “Of course we can’t do that! But we had to try.” But honestly, I am so amazed that so much of the choreography stayed. I never thought in a million years that produce thing was going to go.

But then, beyond that produce bit, we had other bits that I noticed did not make the final cut. So yeah, S&P was like, “Nope. Can’t do that with a cucumber.” And I was like, “Yep, you’re right.” [Laughs] But I’m amazed and thrilled by what remained. Not only the naughty bits, but the ABBA thing with the faces, and the turntable. We shot that, and I walked away from it feeling like I’d just walked away from a car accident. We had done so many different things so quickly that my head was spinning. 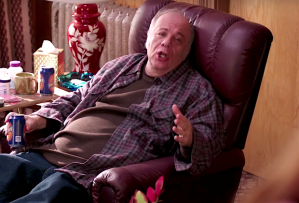 TVLINE | We never really saw Paula confront her father. So she’s OK with things not really being OK between them?
Yeah, that’s another thing that I really loved about this episode. I expected a big “come to Jesus” with the father. And in reality, I was like, “No, this is actually correct,” because if you look at her dad and the home she grew up in, and her ex-boyfriend, it’s almost like they’re all frozen in time… a la Outlander! And the person who has changed is Paula. I think that’s really the moral of the episode: You can’t fight the past. You really can’t change history. And to fight with ghosts, and to fight with people about who they were twenty years ago, or who they still are, is pointless. Especially if you have time-traveled twenty, twenty-five years. So it’s a fascinating parallel to her coming to the mature realization that it’s up to her to let that s–t go.

TVLINE | What can you tell us about what’s coming up in the rest of Season 3, for Paula and for everybody?
I think the moral of our season this year is: two steps forward, one step back. For everybody. Especially Rebecca, but there’s a ripple effect to every other character. So you see us gaining ground, personally and together as a group, and then you see us all slip. As you do in life. So while people on this show usually have the best of intentions, you will see us all succeed and fail… in very, very creative and unexpected ways. [Laughs] In entertaining and funny and poignant and slightly heartbreaking ways.