Jughead’s dad F.P. Jones is coming home… but not everyone is putting out the welcome mat for him.

The Southside Serpent ringleader finally gets out of prison on this Wednesday’s Riverdale (The CW, 8/7c), and though Jughead is happy to reunite with his dad, F.P. has some work to do to win over the rest of the town’s residents. “He’s got a lot of wrongs to right,” Skeet Ulrich tells TVLine, “and they’re not quick to forget. It’s about retribution, certainly, to start.”

Betty is there to help Jughead welcome F.P. back — along with Betty’s mom Alice, who’s had plenty of issues with F.P. in the past. But don’t mistake Alice’s presence for approval, Ulrich cautions: “She’s not necessarily supportive.” In the episodes to come, though, “we do start to learn a little more” about F.P. and Alice’s shared history, back when the ever-judgmental Mrs. Cooper was (gasp!) a Serpent. “There’s a lot to dive into,” he hints. 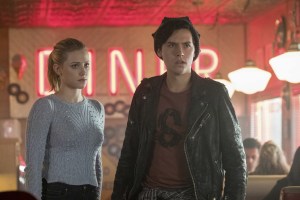 So how does F.P. feel about his son Jughead donning that black leather jacket and becoming a full-fledged Serpent while his dad was in the clink? “He’s not happy at all,” Ulrich admits. “This is the life he’s trying to dissuade him from following, and the nature of what Jughead had to do to even get F.P. out has just gotten him deeply entrenched in Serpent life. It does not sit well with F.P.”

Looking to go straight for once, F.P. takes a job waiting tables at Pop’s, but we wouldn’t be surprised to see him start dabbling in some nefarious activities as well… which might bring him back in contact with Veronica’s dad Hiram Lodge. Ulrich says F.P. and Hiram don’t share a scene together until Season 2’s 13th episode, but he can see some similarities between the two: “They’re kind of cut from the same cloth, but with very different means of making things happen. To some extent, both are ruthless businessmen.”

One good thing about F.P.’s prison stint: He can’t possibly be the Black Hood killer, since he was stuck behind bars when the attacks happened, right? Well, not so fast. Ulrich says F.P.’s innocence “depends on who else is involved in allowing the Black Hood to roam the streets… it’s impossible to really rule anyone out.” Uh-oh… guess Jughead might be right back at that prison for Visiting Day soon enough.

Riverdale fans, tell us: Do you think F.P. has any connection to the Black Hood killer? Share your theories in the comments.