Aw, Will & Grace! You shouldn’t have! Already this year, the revival had given us everything we could have hoped for (its existence) and more (its fabulousness). And on top of that, Tuesday it presented us with “A Gay Olde Christmas,” a holiday episode spiked with just enough optimistic perspective to add a little ho ho ho to our ha ha ha.

As the special began, a long (read: endless) wait for a table at a restaurant left Will ready to bail on Christmas Eve dinner with Grace, Jack and Karen. But “if we don’t maintain our Christmas Eve tradition,” his roommate pointed out, “then we’ll be forced to spend more time with our family, and that’s just not what Christmas is about.” At least Jack was in a festive mood, as Karen had promised him snow as a Christmas miracle. “And rich people don’t lie,” he said with a straight face. Finally, Will couldn’t take the wait anymore. Though Jack pointed out that Christmas was the one time of year when fat people were supposed to be jolly, Will was done with it. Given the state of the world, what was there to celebrate? 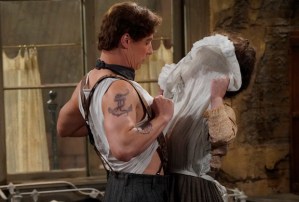 Upon leaving the restaurant, the group dashed into the Immigrant Historical Society in hopes of finding a bathroom for Grace to use. It wasn’t enough for Will to buy a book to make available the for-customers-only facilities, they also had to take the tour, explained its guide (The Big Bang Theory‘s Bert, Brian Posehn). Once the gang entered a recreation of a 1912 tenement, we were transported back in time, to Christmas morning with Irish immigrant Karolyn O’Sullivan (Karen) and her brood, among the kids a baby who’d only “get a name if she survives the winter.” When there was a knock at the door, Karolyn feared it was her landlord Billem Van Billiams, a Scrooge with a “heart as black as coal, and no one knows why.”

However, it wasn’t the villain looking for the rent money Karolyn didn’t have, it was John Patrick McGee (Jack), a penniless sailor hoping to rent a bed in exchange for making the hovel happy and gay. OK, said Karolyn, and just in the nick of time, too, because next through the door was Billem (Will), dollar signs in his eyes except when he got a gander at John Patrick’s bare arms. Not that he hadn’t seen bare arms before. “I’ve seen that the usual amount of times,” he insisted a bit too strenuously. Despite his obvious infatuation with John Patrick, he was kicking out Karolyn & Co. if he wasn’t paid by sundown. 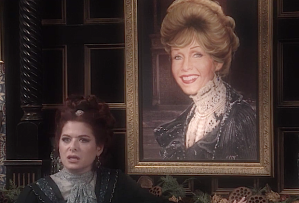 While Billem returned home to find wife Fanny (Grace) contemplating becoming an “inside-of-homes decorator” — a painting of Debbie Reynolds smiling down at her as a sweet tribute to Bobbi’s late portrayer — John Patrick ran to Karolyn with big news. She wouldn’t have to offer her body to the landlord as payment after all. (And yes, it was a fine body. “I may have delivered nine children,” she said, “but most of the heads were tiny.”) John Patrick had learned that — quelle surprise — Billem was, in the seaman’s words, “a sweeper of chimneys… a snake charmer… [a fellow who] only travels by tunnel.” That being the case, John Patrick would offer his body to the landlord instead.

At that very moment, Billem was on his way back to the tenement with Fanny, who objected to his cruelly evicting Karolyn’s family. But the situation was the Irishwoman’s own fault, he insisted. As the tycoon from whom he’d acquired the property — one Frederick Trump — had once told him, the poor have only themselves to blame. And, he added, Trump had yet to say anything with which he’d disagreed. Following a quick encounter with a surprisingly mature newsboy (Beverley), the marrieds were at Karolyn’s door. Fanny loved the dump. “It’s shabby, but it could be very chic,” she said. “I’d call it chic-y shab.” Thinking fast, Karolyn declared that she refused to be evicted until her honor had been defended… and um, it needed to be defended because Billem had stamped his foot; there was nothing worse you could do to an Irishwoman’s floor! So he and John Patrick would have to, ahem, settle it in the hall like men. 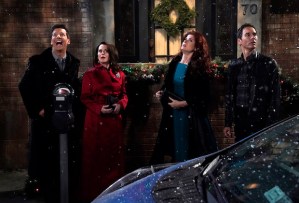 While the guys “fought” noisily outside, Fanny marveled that it sounded like they were praying. “Aye,” Karolyn replied. “I’ll bet someone’s on his knees.” When they returned, Billem, spent, wasn’t in nearly such an evicting mood. Guess “the Christmas spirit really got inside of ya,” marveled Fanny. With that, the tour ended, leaving our foursome feeling reflective. “I didn’t know poverty could be so sad,” Karen said. But at least it worked out for Karolyn & Co. No, said Bert. She eventually went to debtors prison, John Patrick died at sea, Billem was convicted of sodomy, and Fanny became the first woman to vote in New York. That was good, at least. Except that she was also the first woman to be killed for voting in New York. Yikes.

In the end, the gang realized that, as hopelessly bad as things might seem today, they were still way worse in olden times. Just as Bert discovered that Grace had used an antique toilet that wasn’t connected to anything, the quartet dashed outside to discover that it was snowing — Jack got the Christmas miracle that Karen had promised him (even though, of course, she had nothing to do with it). So, what did you think of W&G’s Christmas episode? Did it fill you with as much good cheer as that third cup of eggnog? Hit the comments.