The following recap, by the very definition of the word “recap,” contains spoilers from the fall finale of The CW’s The Flash.

The Flash this Tuesday told a tale of two distinct abductions… that ultimately dovetailed to deliver one of the superhero series’ biggest switcheroos ever.

Back from their honeymoon and ready to unwrap wedding gifts (thanks for glomming onto our wedding and ordering off the registry, Olicity!), Barry and Iris’ life promptly went back to non-normal when The Thinker confronted them on the street in the midst of their returns-apalooza and ultimately hauled The Flash away. Arriving at the superbrain’s “sanctuary,” The Thinker announced that he had a lesson to teach — that not everyone gets happy endings, and Barry must learn to lose once in a while — before trapping The Flash in a speedster prison.

Concurrent with that, Amunet confronted Caitlin at Jitters, where Harry was attempting to console his colleague after she heard that Killer Frost is a way cooler hang. Amunet slapped a power-dampering cuff on her ex-employee and led her away to an abandoned hospital, where a mind-reading meta Dominic needed urgent, risky surgery (to remove one of Amunet’s glove shards from the base of his skull).

Back at S.T.A.R. Labs, Iris was admittedly overwhelmed by the double whammy, and thus failed to give the team proper guidance on whom to save first. That created tensions which, among other things, goosed Cisco and Ralph into an argument over the latter’s goofball commentary/suggestions. After Harry counseled Iris to “choose, or risk losing both,” she directed Cisco and Ralph to chase down vulnerable Caitlin, assuming that Barry can fend for himself. 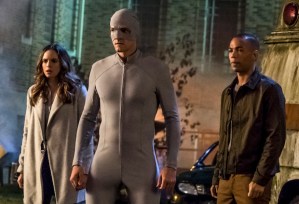 Caitlin had some tricks up her sleeve, however. After getting nabbed by Amunet once while trying to escape with Dominic, she proceeded with the delicate operation, seemingly successfully — until the patient appeared to go into shock. Amunet looked on as Caitlin tried to help Dominic, but in truth Caitlin had leaked into the room anesthetic gas, which slowly KO’d Amunet and her goons. Caitlin and Dominic fled to the street where Cisco and Ralph fended off Amunet long enough for them to hop into a breach.

Barry meanwhile pulled one over on DeVoe by vibrating in place so quickly that he appeared invisible to the untrained eye. When DeVoe lowered the speedster prison wall to investigate, Barry materialized to taunt his captor, after which a struggle ensued. Their fight took flight (how?) over the downtown river, where Barry tricked one of The Thinker’s “tentacles” into shorting out his flying pod, sending both of them plummeting to the water below. Barry, thank Cisco, had his insta-inflating Flash suit (A+ callback!) to soften his landing, while DeVoe seemed down for the count.

Barry would later learn, though, quite the opposite.

As the team minus Wally (who’s in Cambodia!…?) but plus Dominic gathered at Joe’s for some holiday revelry — where Cisco received from Gypsy what was very much not a Breakup Box — Barry was called away by a security alarm at the loft. Once there, he got a phone call from… Dominic? As the meta slipped into the familiar cadence of Barry’s new nemesis, we learned via flashbacks that he is actually now the new vessel for The Thinker! (Being a telepath, he was the perfect host for the physically withering supergenius, who turned out to be Amunet’s buyer.)

DeVoe has no plans to cause Barry’s loved ones there at Joe’s house any harm, however. No, he wants those people around to suffer, seeing as Barry there at the loft — where DeVoe’s original body, stabbed with a wedding gift Barry had handled earlier, has been deposited — is about to be arrested for murder! As Captain Singh & Co. storm in, Barry starts to crackle but opts against speeding away, sensing the torment it would cause Iris, Joe et al. Instead, he uttered to himself and embraced the episode title, “Don’t Run.”

What did you think of The Flash‘s fall finale? (The show returns Jan. 16.)