Raise your glass to the Nine-Nine!

Whereas most shows would go all out for their 100th episode, Brooklyn Nine-Nine on Tuesday instead celebrated its 99th. The half-hour found the entire squad (minus Gina, who was still on maternity leave) taking a cross-country road trip home from Los Angeles and the funeral of former CO McGinley. While at the memorial service, Holt discovered that he was in the running to become the next police commissioner of the NYPD, yet he refused to get his hopes up — unlike Jake.

What Peralta and the rest of the Nine-Nine didn’t know (yet) was that Holt had previously cut a deal with Seamus Murphy to get Jake and Rosa out of prison. As Holt would later reveal, he feared what the gangster would ask of him, should he become commissioner, so he attempted to sabotage his own promotion. And man, was he great at it! Every step of the captain’s plan to delay the squad’s return to New York in time for his interview was a stroke of genius.

First, on the way to LAX, Holt drove past Nakatomi Plaza from Die Hard, knowing full well that Jake would force him to pull over and head in to take pictures. Once inside, Holt locked them in a room, guaranteeing that they wouldn’t get to the airport on time. Next, he lied about there being no available rental cars to make the 48-hour drive back to NYC once all the other flights had been cancelled. What he couldn’t have predicted, however, was that Jake would then find a rundown RV aka The American Creeper. Holt tried to slow down the vehicle by sticking Jake’s cheese puffs in the fuel tank but inadvertently blew it up. (Whoops!)

The squad then took refuge at the cattle ranch belonging to Charles’ cousins Steve, Tommy and Becca aka the Cow Insemination Kings of Central Texas. Unable to sleep through the sounds of bovine copulation, Jake and Holt shared the first of two incredibly sweet moments. In this one, Jake told Holt that the reason he wanted to get him back in time for his interview was because he had made him a better man and wanted to return the favor. The next day, Holt’s last-ditch effort to derail the group’s journey ended with him finally telling everyone the truth about the deal he agreed to in order to protect Jake and Rosa. In response, Jake accidentally blurted out, “I love you, Dad.” (Aww… )

Ultimately, Peralta convinced Holt to go through with the interview, promising on behalf of the entire precinct that they’d find a way to deal with Murphy if he ever became an issue. It was then up to “super chill” Amy to find them a way back home. To motivate his fiancée, Jake had her think back to the “time we went to the deli for cold cuts and the ticket machine was broken, so you found out what time everyone arrived and made them get in a single-file line from earliest to latest” — and by golly, it worked! Figuring out a route involving an ambulance, an airplane, a train and a taxicab, the high-strung detective got Holt to One Police Plaza just in the nick of time. 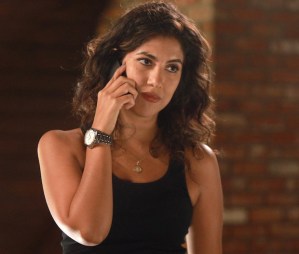 The other major development in the episode involved Rosa, who after trying and failing to hide her new relationship with a woman from Charles, came out as bisexual. At first hesitant to talk about it at all, Diaz later acknowledged that she was glad she was able to confide in Boyle, adding that it felt great to tell a member of her work family. Now all that’s left is to try and figure out who the show might cast as Rosa’s girlfriend! (Perhaps someone from another Mike Schur comedy, like Parks and Rec or The Good Place? Hmm…)

Next week, the one-hour fall finale! In the meantime, grade the 99th episode via the following poll, then get a discussion started below about the outing’s major developments.