Looks like Flash foe The Thinker has a mind reader among his arsenal of recently manufactured metas.

How to Get Away With Murder alum Kendrick Sampson has been cast in the recurring Season 4 role of Dominic Lanse, a TSA agent who apparently was among the dozen bus passengers doused with dark matter and now possesses the ability to read other people’s thoughts — thus earning him the sobriquet of Brainstorm, our sister site Deadline reports. 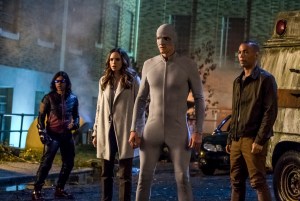 In addition to his run as HTGAWM‘s Caleb, Sampson’s TV credits include The Vampire Diaries, Fox’s Gracepoint and, most recently, Showtime’s White Famous.