Upon hearing that The Voice‘s Top 11 would be performing songs suggested by viewers, I thought, “Hey, at least we can’t do any worse than Miley Cyrus assigning ‘Delta Dawn’ to Ashland Craft or Adam Levine sticking Adam Cunningham with ‘Against All Odds.'” And who among us hasn’t said to themselves, “No, no, no, don’t give so-and-so that song, give them this song!” then added for emphasis, “Jeez, why would you be so cruel to a member of your own team, Coach?!?” Personally, I wanted to hear Chloe Kohanski try something from the Sia catalog, Noah Mac rock Franz Ferdinand, Janice Freeman tackle Sinead O’Connor (in particular “Troy” — can you imagine?!?) and Red Marlow do “The Devil Went Down to Georgia” (with Natalie Stovall returning to lend a hand with the fiddling). What did we actually hear Monday night? And which of the Top 11 rose to the challenges dished out by the audience? Read on…

Janice Freeman (Team Miley), “Shine” — Grade: B- | In theory, the Collective Soul hit seemed like it was going to allow Janice to really rock out. In practice, though, it instead made me go back and rethink my theory. She’d picked up steam by the end but started off on stage a bit muted and, for the first half of her performance, was even almost drowned out by the band — something I wouldn’t have thought was possible with a voice as massive as hers. Hardly a disaster but definitely a blown chance to, er, shine.

Red Marlow (Team Blake), “The Dance” — Grade: A- | After promising in rehearsal to “tenderize” the iconic Garth Brooks ballad, jovial Red kept his word on stage, delivering a rendition of the tearjerker that was as spot-on vocally as it was resonant emotionally. His performance was a beautiful example of making a huge impact with a soft sound. If the male-country lane is only big enough for one singer, Adam Cunningham was gonna have to be off-the-charts incredible when it was his turn in the spotlight.

Shi’Ann Jones (Team Jennifer), “Listen” — Grade: B+ | When it was announced that Shi’Ann would be taking on this Beyonce showstopper from Dreamgirls, I thought, “Man, that will be the perfect number for her — in a few years.” I expected, like with “Vision of Love” last week, that the 15-year-old would lack the experience to really control the vocal and sell the song. So color me surprised: On stage, the youngster started off a little wobbly, and yes, she hit an off note here or there. But overall, her performance was worthy of a little shoe-throwing. Maybe not a pair of shoes but one, at least. If only she didn’t always look scared to death! 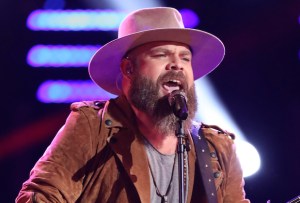 Adam Cunningham (Team Adam), “American Girl” — Grade: B | Surviving last week against all odds — and “Against All Odds” — Adam was treated far more kindly by viewers than he had been by the coach who’d stuck him with Phil Collins. The Tom Petty and The Heartbreakers smash was a fine choice for the country boy, but he seemed to struggle with going back and forth between playing his guitar and not, and his vocal suffered during the stretch when he was running around high-fiving the audience. In short, good but not the off-the-charts incredible that I suspect he needed.

Brooke Simpson (Team Miley), “What About Us” — Grade: A- | Props to Coach Cyrus — giving the Pink hit a Native-American touch for Brooke was a cool idea that sounded red-hot. Brooke sounded great, too, packing her cover with enough vocal power to start a revolution, never mind blast through the bombast of the arrangement. And, in the song’s more vulnerable moments, she shone more brightly than Miley and JHud’s sparkly Christmas-present outfits.

Davon Fleming (Team Jennifer), “I Have Nothing” — Grade: C+ | After his perfectly-adequate rather than perfect “Love on Top” last week, Davon needed to do something amazing to stop us from being bitter that his coach gave him this lane instead of Chris Weaver. (Even then, I might still be bitter.) As Davon began, his uncertain falsetto wasn’t doing the trick. Things started looking up on the big notes, when he got to unleash his inner Whitney, but ultimately, nope — the song simply required greater range than he has (or at least than he was able to demonstrate).

Ashland Craft (Team Miley), “Chicken Fried” — Grade: B+ | After hearing Ashland’s karaoke-esque “Delta Dawn,” I really wanted to hear how she’d have done on the song that was her and her coach’s other option last week — and clearly, I wasn’t the only one. On stage, Ashland’s take on the Zac Brown Band hit allowed her to remind us why she’d been such an early favorite after her Blind Audition. She sounded as at-home with this number as she looked, and she looked as at-home with it as a shot glass in a saloon. 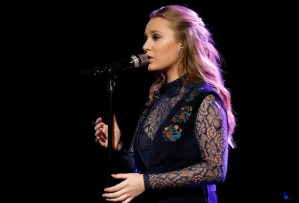 Addison Agen (Team Adam), “A Case of You” — Grade: A+ | If ever there was a kid who sang with the depth to do justice to a Joni Mitchell song, it was Addison. I didn’t even wonder how she’d do before she hit the stage — I just knew her rendition would be gorgeous. (Did any of you not expect greatness? I think, when I wasn’t looking, she became my favorite of the season.) And, as high as my expectations were, the young old soul lived up to them. Her performance was vocally gorgeous, emotionally open, simple and stunning.

Keisha Renee (Team Blake), “It Matters to Me” — Grade: C | Great song for Keisha — if, that is, she could show some restraint. We know she can go big, but that doesn’t mean that she has to sing loud enough to be heard in Texas, especially on a heart-tugger like this. And in the moment of truth? Yep, out the window Keisha threw restraint, turning a beautiful song into something that felt hollow and insincere, and drove home the point that bigger isn’t always better.

Noah Mac (Team Jennifer), “Electric Love” — Grade: A- | On paper, this seemed like an odd choice for Noah, no? Børns’ original is much more alterna-pop than the alterna-rock for which the mop-topped teen has become known. But he had an idea about a stripped-down arrangement for the song that, wowza, worked gangbusters. As for his vocal performance, it was as strong as the hairspray that kept his fab coif in place. Maybe he’s actually made for alterna-pop?

Chloe Kohanski (Team Blake), “Total Eclipse of the Heart” — Grade: A- | Since most viewers liked Chloe’s version of “Time After Time” a whole lot more than I did, I guess it makes sense that you’d want to hear her cover another ’80s ballad. This time, though, I think we can all agree that she killed it. Her vocals were so raw and ferocious that they brought to even my jaded eye a glittery silver tear. Blake should have her singing a lot more rock.

So, what song(s) would you have assigned the contestants? And who do you think gave the night’s best performance? Vote in the poll below, then hit the comments.