I’m talking about when a smartie’s outburst of techno babble is met by his or her layman colleagues with glazed eyes and dropped jaws, followed by the inevitable variation on, “In English, please.”

Take, for example, this recent episode of Arrow, where on three different occasions — all within the same 42 minutes, and sometimes just scenes apart — a tech genius failed to proactively dumb things down enough: 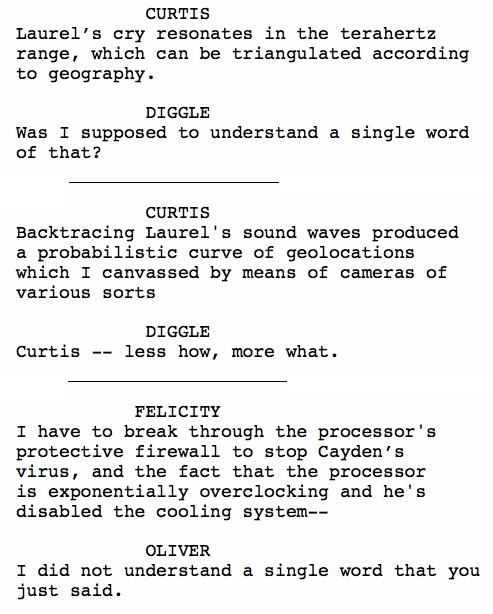 TV, I am not here to begrudge you the brandishing of brilliant minds on shows such as Arrow, Criminal Minds and Scorpion. Far from it. Lord knows, Jack Bauer would have died 10 times over had Chloe not known how to open a socket and upload a terabyte widget into the ethersphere.

Rather, my point is this: When you get to one of those scenes, keep in mind that these people almost always have worked with each other for years and years. So at some point, didn’t Alias‘ Marshall or Bones‘ Brennan realize that to launch into a techno babble-heavy dissertation would, without fail, result in someone asking for it “in English”? And then they’d have to basically repeat themselves?

Why not speak more plainly from go and save us all some time?

We hear all the time from showrunners about how such-and-such scene/kiss was “cut for time.” Well, if I may suggest an area where seconds can be easily snipped, consider these alternatives to the Techno Babble/”Put it in English” trope, edited for clarity in a 280 Characters or Less culture:

1) Have the computer/science/medical whiz “decode” their dizzying download as they go along (e.g. “I could do this, which means this….”).

2) Have the “layman character” translate for us, seeing as they have worked with this person for years and surely picked up on a thing or two along the way (e.g. “In other words, you would do this.”)

In an increasingly tech-heavy/-savvy society, the wonk’s words aren’t as insanely foreign as they used to be (military-trained Dig doesn’t know what “triangulate” means?), while the ostensible humor of the moment (“You’re so smaht! And I isn’t!”) has become the groan-worthy equivalent of a Dad Joke — and trust me, I know plenty of those.