Thanksgiving, you have failed Oliver Queen.

During this Thursday’s Arrow (The CW, 9/8c), Oliver’s Turkey Day celebration with his son William and girlfriend Felicity goes like “every other holiday or moment that should be fun, which is to say that it goes to s–t almost immediately. Like, in Act One,” star Stephen Amell previewed during TVLine’s set visit. But there is a silver lining to all the drama: “It ends on a relatively happy note,” the actor added.

For Amell, the hour was his “first really busy episode” since the season’s second installment, he shared — and with good reason. As seen in the promo, Oliver has his hands full, what with him getting arrested by FBI Agent Watson and all. 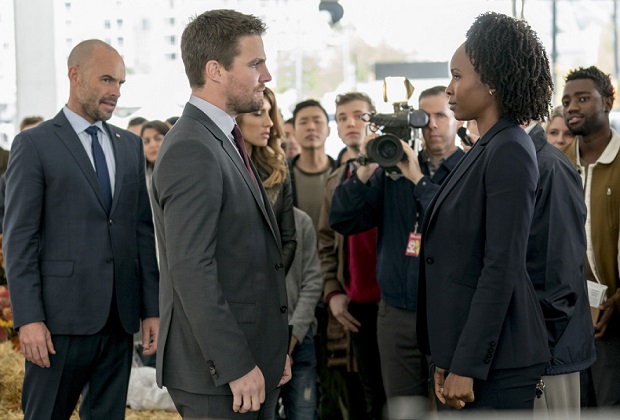 “I’ve really enjoyed Sydelle [Noel, who] plays Samandra Watson,” the actor continued. “They always write Oliver and her as having these tense standoffs. But starting in Episode 2, when I go in there to talk to her, I don’t know what it was, but I felt like my character just wanted to smile and border on being almost smug. Or just competent. I feel like that is something we’ve tried to bring in this year: This is a guy that’s more comfortable in the public space now and in the public eye. He’s just more comfortable in his skin, and hopefully, that’s shown.”

On top of getting thrown behind bars, Mayor Queen has another problem: Cayden James is going after Star City, and he’s not an enemy that Oliver can fight in typical vigilante fashion. The tech-savvy baddie is “not physical,” Amell noted. “He’s intellectual… We wanted to create a new kind of villain.”

And this foe has a very specific goal in mind. “Cayden James is really going to be trying to put his stamp onto what he wants the city to look like,” teased co-star Echo Kellum (Curtis), adding that the Helix mastermind wants “revenge” on “A.R.G.U.S. and everyone who made him pay and sit in that cell for so long.” 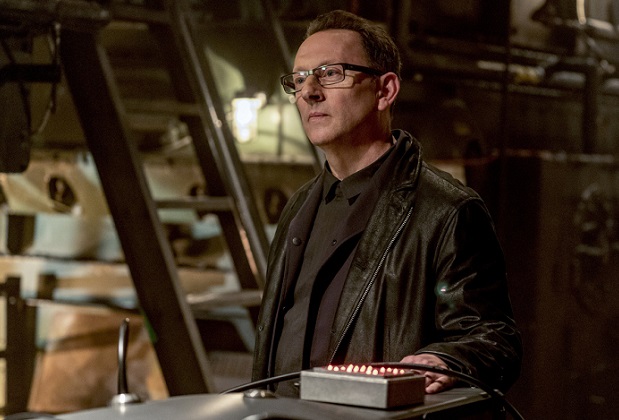 While Oliver & Co. are definitely not Team Cayden James, the show’s cast is most definitely pro-Michael Emerson, who plays the Big Bad. “It is a stunning thing to share scenes with him, especially as someone that was a giant fan of Lost,” Amell enthused. (You may recall the Arrow leading man freaking out during TVLine’s San Diego Comic-Con interview when he learned — on-camera! — that Emerson was joining the CW series.)

Elsewhere in the episode, Felicity’s recent decision to name her and Curtis’ company and select their first project without consulting him will cause some tension between the pals/colleagues. “That’s a pretty big deal, to cut out one of your partners, in that sense,” Kellum said. “You want it to be a cohesive unit where you both are equals. So you will see a little bit of friction between Curtis and Felicity in regards to the company, but I think it’s something that they can definitely work out and get past. You forgive your friends, you move on, but there will be a back-and-forth about that, for sure.”