Marvel’s Runaways is off and running, with the first three episodes now streaming on Hulu. Will you keep tabs on the teens’ super, supernatural adventure?

In EPISODE 1, we saw Alex (Rhenzy Feliz) endeavor to get the old gang back together, if only for one night to remember Amy. And though most of the remaining sextet brushed off his overture, fate had other plans. The daughter of Church of Gibborim leader Leslie Dean (Annie Wersching), Karolina (Virginia Gardner) got tips from runaway-turned-parishioner Destiny on how to rebel, and made tracks for a wild house party. There, she thought to remove the bracelet given to her by the church, and upon doing so she began to glow/sparkle… before fainting. Chase (Gregg Sulkin) spotted Karolina in time to fight off some classmates who were about to rape her; afterward, he brought her to Alex’s house. Similarly, Gert (Ariela Barer), after being stood up by Chase for a study date, showed up at Alex’s with her adopted sister Molly (Allegra Acosta), as did Nico (Lyrica Okano), who had tried but failed to use magic to bring back the sister her parents still mourn so deeply. 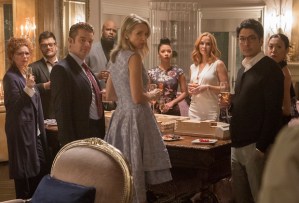 Reunited albeit awkwardly, the teens eventually gravitated toward the wing of Alex’s house where all of their parents had been holding their PRIDE meeting (ostensibly for “fundraising” or something). But upon discovering a secret door, the kids ventured to an underground chamber, where they witnessed their folks, clad in ceremonial robes, drug young Destiny and then wrestle her into some sort of sacrificial box. Just then, Molly’s cell phone camera flashed, alerting the adults to possible eavesdroppers. The kids scrambled topside, with Molly discreetly using her superstrength to force open the secret door. When Alex’s parents showed up in the game room to check on the kids, they did their best “innocent Twister game” imitation, throwing off any suspicion that they were somewhere they shouldn’t have been, seeing something they shouldn’t have.

EPISODE 2 “rewound” things to offer PRIDE’s POV of the premiere, and in turn shed light on the specific dynamics between the adults and their respective marriages. For example, Leslie Dean patronized her former TV-star husband Frank (Kip Pardue) when he lobbied to run the church alongside her; real estate magnate Geoffrey Wilder (Ryan Sands) saw construction on a church facility get briefly hijacked by members of the gang he ran with years ago, though he still remembered a few tricks from those hard-scrabble days; and Victor Stein (James Marsters) is an explosively egomaniacal inventor whose outbursts apparently have steered wife Janet (Ever Carradine) into an affair — with Tina’s father Robert (James Yaegashi).

The second episode closed with Geoffrey’s discovery of a pin that apparently fell off Molly as the teens fled the secret annex — triggering new suspicions from him and wife Catherine (Angel Parker).

EPISODE 3 opened with a flashback to the funeral for Molly’s PRIDE member parents, who were killed in a fire (that perhaps, and suspiciously, burned the hand of Nico’s mom Tina?). Afterward, Gert’s granola-y parents, Dale and Stacey (Kevin Weisman and Brigid Brannagh), suggested that Molly live with them. We then jumped back to the day after the kids witnessed the ritual, where Karolina revealed a text message from Destiny claiming she joined a church trip to London. Some, Nico included, were skeptical, so the friends went about investigating the mystery. Chase and Gert first explored his father’s lab (where they found but couldn’t open the biometrically-locked “box”) and then Gert’s own basement, where her parents are hiding a small dinosaur (“Old Lace”) that seems to obey Gert, but nonetheless flees when it hears a noise. Karolina meanwhile asked around about her Gibborim bracelet, only to learn that no one else “glows” when they take theirs off. But in roaming the church, she seemed to recognize herself as the otherwordly being featured in a mural painted by her late (?) grandfather, whom we have seen Leslie regularly visit in her very private “meditation” room.

Elsewhere, after the Minorus threw a surprise party for the Yorkeses, whose Synnergy (memory-removing) serum they funded, Tina coaxed husband Robert into a very overdue “date night,” though her attempt to reignite their sexual spark went terribly sideways and instead led him into bed with Janet; when Catherine confronted Molly about the found pin, the lass lied, twice but ultimately successfully, about why she was in that part of the house; Nico accidentally made it snow in her mother’s office while handling the ceremonial staff and regarding a paper snowflake made by her dead sister; and Destiny’s body washed up on a beach somewhere, signaling to Leslie and Tina that a new sacrifice will be needed.