The Flash foe/telepathic ape lands in Vietnam with the Waverider crew during tonight’s episode (The CW, 9/8c), but as far as Purcell is concerned, Grodd’s just another monkey.

“Who the hell is that?” the actor responded when asked about Grodd’s visit during an on-set interview. “Just call it monkey! Don’t call it Gorilla Grodd. Rory, how is his reaction to the monkey? It’s huge! It’s big, and he’s Rory. You know, he tries to burn the bloody thing.”

So maybe Mick Rory and Grodd aren’t the best of friends, but the time-displaced beast does share a connection with one of the Legends. “I [have] quite an interesting personal relationship with the gorilla in that episode, which was great,” previewed Maisie Richardson-Sellers, noting that her character “Amaya speaks to animals, so they communicate on a whole other level.”

That unique bond allows viewers to “see a more tender side to Gorilla Grodd, which I think is quite beautiful, actually,” Richardson-Sellers added. “I think one thing Legends does really well is that there is no such thing as a villain and a hero. Everyone is flawed, and everyone has their positives, as well. So we actually see positives to Gorilla Grodd,” who wreaked his fair share of havoc on The Flash. 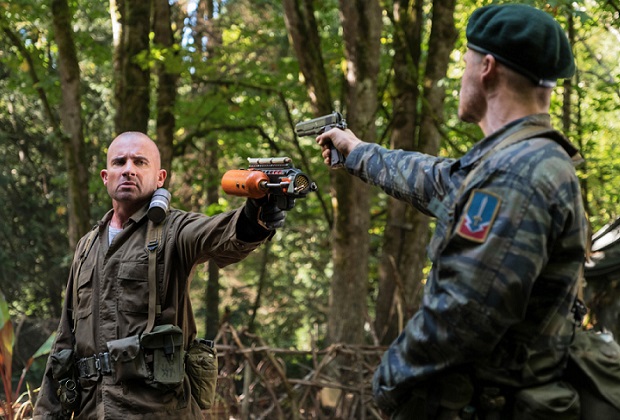 Meanwhile, Ray – who knows of Grodd, thanks to his friends in Central City – is “equally amazed, intrigued, and also frightened of what they’re going to do about that problem,” Brandon Routh shared.

And Grodd’s not the only surprise that awaits the Legends in Vietnam. For Mick, the time-trip turns out to be a revealing experience, in which “we get to see some character stuff [and] some real deep stuff” from the often surly antihero, Purcell described. “He meets his father, and so there are beautiful moments there. For me, personally, it was a great experience, just doing some emotional work.”