After happily bringing home his frisky girlfriend Robin from the hospital, Connor’s delight turned to concern as he began to question if her hyper-sexualized behavior was actually a symptom of her not-so-cured illness. 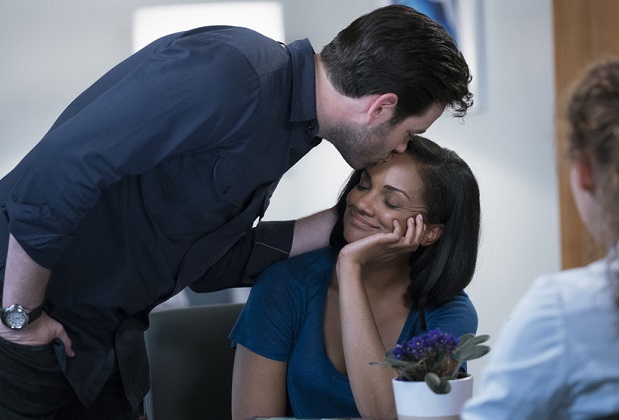 “It will create tension in their relationship because Connor is always wondering if she’s still ill,” executive producer Diane Frolov tells TVLine, “and Robin always feels like she’s being scrutinized by him. Connor wants to take care of her, but Robin hates feeling like she’s needy. She wants to be his lover, not his patient.”

Robin is also “very aware of the toll” that the couple’s complicated dynamic is “taking not only on herself, but on Connor, as well,” star Colin Donnell adds. “He’s trying to make that work at home, while coming to work and being in competition with a new doctor. It does start to take its toll. We really see that develop, and it comes to a head over the first part of the season.”

Read on for scoop about the season opener’s other big developments, including Dr. Charles’ friction with Sarah Reese, that “Manstead” lip-lock and more.

A SHOT OF TRUTH | Dr. Charles survived being shot by his patient, but his troubles were far from over after a three-month time jump. All healed, the psychiatrist testified in the shooter’s favor for an insanity plea. His mentee Sarah, however, saw it differently, arguing for the prosecutor’s side in court. “That’s going to be a big, big strain on their relationship,” Frolov says. “She so looks at him as a father figure and is invested in that, so she was really personally impacted by the shooting.”

Meanwhile, Dr. Charles is dealing with the idea that he might be responsible for what happened to him. The doc is wondering, “‘What did I miss? He’s mentally ill. How did I contribute to this?'” Oliver Platt shares. “I get a handle on the shooting a little bit quicker than Sarah does. We’re still telling stories about how it affects her work.” 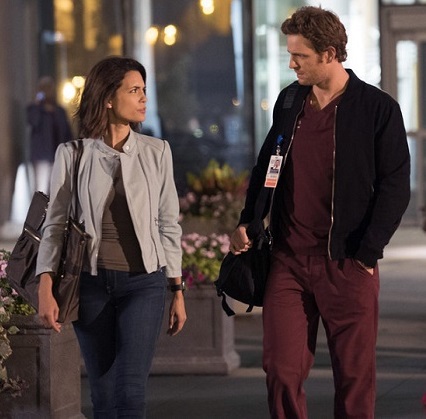 SEALED WITH A KISS | Will-they/won’t-they pair Will and Natalie finally took the next step when she boldly planted a kiss on him. “It seems like Natalie and Will almost switched places,” Nick Gehlfuss describes. “Will’s trying to take on more responsibility, and is being tested a lot to see if he’s learned his lesson on some things, and trying to restrain himself.” Meanwhile, “Natalie’s going the opposite,” his co-star Torrey DeVitto adds. “She’s taking more risks,” like smooching her pal. But “Manstead” won’t be without its difficulties: “Tensions that kept them apart earlier will creep into their relationship,” EP Andrew Schneider warns.

NEW COUPLE ALERT! | Dr. Ethan Choi and nurse April Sexton are officially a thing now, but she wants to keep their romance on the down-low, especially since another nurse is already complaining about favoritism on Dr. Choi’s part. Given their “hierarchical” workplace dynamic, the pair will struggle with the question of, “How do you navigate a relationship when your loved one is your boss or your underling?” Frolov describes. “They’re going to have to figure that out, and that’s not an easy thing, because you have people with their lives in the balance.”

Med fans, grade the Season 3 opener below, then hit the comments to back up your pick!