Finally, with Monday’s episode of The Voice, the power shifted from the coaches to the audience. At long — long! — last, we got to vote for the contestants whose singing was music to our ears. But which of the Top 12’s performances were dazzling enough to inspire a tweet of support? Read on, and after we review the vocalists’ efforts, you can not only vote for your favorite but choose your overall pick to win Season 13. 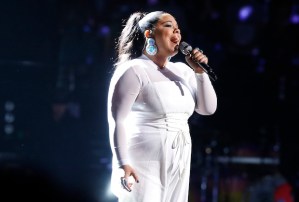 Brooke Simpson (Team Miley), “Praying” — Grade: B | After describing herself in rehearsal as falling somewhere between Britney Spears and James Brown, Brooke took to the stage and sounded like no one so much as herself. As we’ve grown to expect, her vocals were gutsy and powerful. Moreover, she nailed her big note and somehow managed to complete her performance without either of those earrings that looked like they weighed 5 lbs. apiece going flying. The only thing Brooke didn’t manage to do — and how could she with this serious Kesha song? — was show off the bubbly, smiley side that her coach seemed so interested in us knowing.

Red Marlow (Team Blake), “The Church on Cumberland Road” — Grade: B | Bless his heart, that Red is a funny one, joking with Blake in rehearsal that it was a close race between him and his coach for the Sexiest Man Alive title. I only wish I was more excited about him as a singer. (I prefer Adam Cunningham.) Mind you, Red is a solid vocalist, and the audience is responding to his brand of classic country in a big way. He just struck me again Monday as the kinda performer that you’d really enjoy listening to in the background at a concert while you were in line to get another pitcher of beer, not the kind of performer that you can’t take your eyes off of.

Shi’Ann Jones (Team Jennifer), “Vision of Love” — Grade: B- | As if it hadn’t been confounding enough that JHud kept the green teen over Chris Weaver in the Playoffs, the coach then stuck the youngster with a ballad whose whistle-high notes we — and, by extension, she — had to have known that the kid couldn’t hit. Whaa? When the spotlight fell on Shi’Ann, she started off beautifully in her lower register, then got a bit wobbly before recovering on the chorus and actually coming awfully close on the whistle-high notes. A little yelly at times, but overall, not bad. 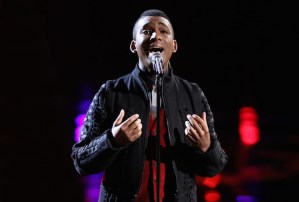 Jon Mero (Team Adam), “Why I Love You” — Grade: A- | Maybe Adam, having realized that, when Jon puts on the razzle-dazzle, his cheesiness irritates the lactose-intolerant, is smart to keep giving him ballads. Here, Jon demonstrated amazing range, going from his lower register to a falsetto that was, frankly, breathtaking, as well as great restraint, performing with emotion that came off as real and believable rather than the equivalent of in-concert scenery-chewing.

Ashland Craft (Team Miley), “Delta Dawn” — Grade: C+ | Hmm. Were I in Miley’s cowgirl boots, I suspect I would’ve talked my second coming of Gretchen Wilson out of doing the Tanya Tucker oldie that’s so familiar, anyone else doing it is almost guaranteed to sound like they’re doing karaoke. But alas, I wasn’t in Miley’s cowgirl boots, and sounding like a karaoke version of T.T. wasn’t going to be Ashland’s biggest problem. Her performance was fun and all, and she served some of that growl that once made me an insta-fan, but it was also pitchy as hell.

Adam Cunningham (Team Adam), “Against All Odds” — Grade: B- | W the actual H? For the first live show, Levine gave his country boy a Phil Collins cover? I’m so befuddled, I don’t know whether to end that sentence with a period, a question mark or a combination of question marks and exclamation points. Were there not enough amazing country songs out there on which Adam C. could showcase the kind of artist he’d be that Adam L. had to assign him a pop ballad? A.C. reinterpreted the song in a Chris Stapleton-esque way but fumbled out of the gate. Even after he recovered, I still wasn’t sold — until, that is, he hit those last big notes, on which he didn’t so much sing as roar. Don’t think he’ll be going home on Tuesday. 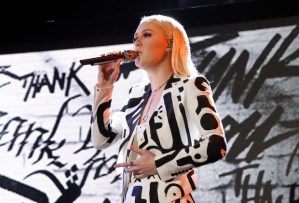 Chloe Kohanski (Team Blake), “Thank You” — Grade: A+ | On paper, this seemed like it was going to be a hard song for Chloe to pull off. To me, anyway — I know you guys think she could sing the TV test pattern and still sound like a dream. But to my ears, her voice generally lacks the warmth of Dido’s. On stage, oh, good Lord! First, she sounded more annoyed than grateful, then, when she went for the high note on the “I,” she missed. Every time. She couldn’t have intended it to sound like a tire losing air, right? I’ll go ahead and give her the grade I know you’ll freak if she doesn’t get, then quietly go back to not ever listening to this again.

Davon Fleming (Team Jennifer), “Love on Top” — Grade: B | Upon finding out that Davon was tackling this Beyonce range rover, I got my throwing shoe ready to hurl at the TV. I’d have bet my weekend wine money that he was gonna slay it. Aand… ? Well, it was no disaster. But, if a singer can’t scale the heights that Queen Bey does, what’s the point of having them do this particular number? Give him another damn song. In the end, Davon did fine, and was entertaining, but unlike JHud and Adam, I wasn’t throwing any shoes over his performance.

Addison Agen (Team Adam), “She Used to Be Mine” — Grade: A- | Now see? Addison is exactly why I’m not a Chloe fan recently — whereas I haven’t found Chloe’s vocals pleasant to listen to, I’ve been crazy about Addison’s. Here, she sounded not just flippin’ gorgeous, she sang with remarkable control, going from soft as an eyelash to strong as a boulder. Even more impressive, her performance had a heartbreaking quality that you’d expect from a lived-through-it-all vocalist two or three times her age. 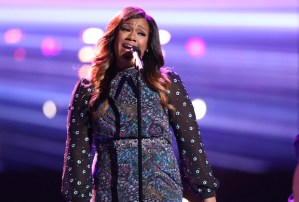 Keisha Renee (Team Blake), “Midnight Train to Georgia” — Grade: B+ | After the mixed-bag of the countrified “Against All Odds” earlier in the night, I wasn’t exactly champing at the bit to hear this reimagining of the Gladys Knight and the Pips hit. But kudos, Blake — the rearrangement was lovely. And the worst you could say about Keisha’s performance was that at times she oversang it, going bigger than was necessary or even advisable. Sometimes, it’s OK to bring down the house without making the rafters shake.

Noah Mac (Team Jennifer), “Speed of Sound” — Grade: B- | Even if Noah doesn’t win the contest, he’s already made it — we learned in his pre-show interview that a local ice-cream store had named a flavor for him. (But Noah Mac-n-Cheese? Reserving judgment till I get a sample.) On his Coldplay cover, the teen hit notes that were as high as his always-amazing hair. However, he sounded like he was struggling in his lower register. Maybe it wasn’t a great idea to do that marching-in-place move while singing? Competent if uninspiring.

Janice Freeman (Team Miley), “The Story” — Grade: A+ | It’s a shame Janice doesn’t seem to generate the kind of frenzy that Chloe does, because not only is she a kickass singer, she’s one who seems to believe whatever she’s singing. It isn’t just an act with her, she’s feeling it. Dedicating her performance Monday to her husband, she belted with enough passion and power that really, the light show going on behind her was superfluous. She was her own special effect, going bigger and bigger until there was simply no “bigger” left to go. So stunning that Blake even threw a cowboy boot!

So, which of the Top 12 did you think gave the best performance? Who do you predict will win the season overall? Hit the polls, then hit the comments.