Amy Sherman-Palladino’s characters are always so casually witty, it’s about time one of them actually tried being funny for a living, right? 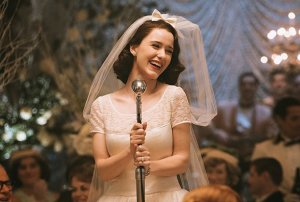 The Gilmore Girls creator’s sparkling new Amazon comedy The Marvelous Mrs. Maisel — debuting Wednesday, Nov. 29 — is set in the burgeoning stand-up comedy scene of 1958 New York City, and that time period is such a perfect fit for Sherman-Palladino’s old-Hollywood, rat-a-tat-tat dialogue, you wonder why she ever set anything in modern times. The pilot introduces us to Midge (Rachel Brosnahan), a quirky, quippy Jewish spitfire in the Lorelai Gilmore mold. (She’s the type who gives a speech on her own wedding day.) Midge is an ideal 1950s housewife, effortlessly raising two kids, making brisket and even getting up early to put makeup on and fix her hair before her husband Joel (Michael Zegen) wakes up. (Because God forbid he lay eyes on her with curlers in.)

Her picture-perfect life takes a sharp turn, though, when Joel — an aspiring comic who steals jokes from Bob Newhart records — bombs onstage trying out his own material one night. He’s so traumatized, he packs up and walks out on Midge. (Oh, and he’s also sleeping with his secretary, by the way.) Her upper-crust parents instantly blame her for the split, and seem more concerned about what the neighbors will think than how their own daughter is feeling. Drunk and hopeless, Midge stumbles onto a comedy club stage and spills her guts to the audience… and finds she might actually have a knack for this comedy thing. 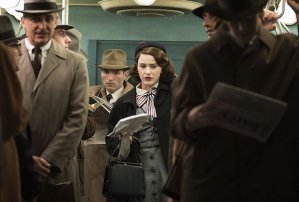 Bursting with old-fashioned charm, Maisel is shot in the style of Woody Allen’s nostalgic comedies, with a jazzy soundtrack of old standards and an eye for the beautiful chaos that is life in the Big Apple. (Actually, it kind of feels like what Allen’s own Amazon series should’ve been, instead of the aimless mess it actually was.) There’s sly, quotable humor throughout, of course, but also a strong feminist streak, pointing out the ridiculous restrictions placed on Eisenhower-era women, like when Midge and her friend attend a hilariously barbaric exercise class. Midge rebels against those restrictions, with her unladylike mouth continually getting her into trouble, and she instantly ranks as one of Sherman-Palladino’s finest comic creations.

It’s a breakout role for Brosnahan: Best known for playing doomed call girl Rachel Posner on House of Cards, she is positively enchanting here, playing both the happy housewife and bawdy comic to perfection. Midge’s comedy sets are a marvel to witness: savage and electric, tumbling out in an unfiltered stream of confessional rants where she opens her wounds for all to see. (It’s almost like she becomes possessed once she steps up to a microphone.) Her stand-up journey recalls female pioneers like Phyllis Diller and Joan Rivers, who also spun their lives as housewives into comedy gold, and her split with Joel gives Brosnahan some nice melancholy notes to play as well. (They both still love each other, it seems, but not enough.) 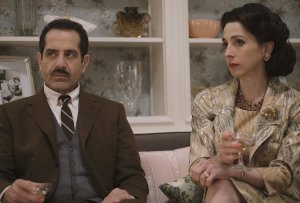 Maisel boasts a deep bench of comedy talent, too. Emmy winner Tony Shalhoub and Marin Hinkle are delightful as Midge’s wealthy, Gilmore-esque parents, whose sprawling Upper West Side apartment doubles as Manhattan real-estate porn. (Midge’s mother gets winded just trying to chase down her daughter through the long hallways.) Gilmore veteran Alex Borstein is a hoot as deadpan club bartender Susie, who sees Midge as the next big thing in stand-up, and Kevin Pollak makes for a fun sparring partner with Shalhoub as Joel’s factory-owner dad Moishe. Plus, Zegen does fine work as Joel, who’s more complicated than he appears: He isn’t painted as a one-dimensional jerk, but as a decent guy who got in over his head, and their failed marriage, once full of love and potential, lends Maisel a bittersweet edge.

Yes, Sherman-Palladino mines some of the same dramatic territory here as Gilmore Girls — independent woman breaks away from her rich upbringing — but she dials back the self-conscious quirkiness, giving Maisel a warm, elegant visual style along with its surprisingly current subject matter. (Midge’s comedy sets are a well-deserved kick in the groin to any man who would dare say women aren’t funny.) So all of you Gilmore fans out there praying for another revival? In a way, those prayers have already been answered. There’s a new Sherman-Palladino heroine in town… and she’s pretty marvelous.

THE TVLINE BOTTOM LINE: Smart, funny and unexpectedly timely, Amazon’s The Marvelous Mrs. Maisel is a sparkling confection worth applauding.