When CBS’ NCIS: Los Angeles first came calling, New York-bred Renée Felice Smith had just graduated from NYU’s Tisch School of the Arts with little more on her resume than an Off-Broadway show and a passed-over CW pilot — Gilmore Girls creator Amy Sherman-Palladino’s The Wyoming Project, which she likens to “Little House on the Prairie meets Party of Five” — on her resume.

As such, being courted to join the high-octane NCIS spinoff for Season 2 “was really big, huge,” the actress warmly recalls. “It changed my life.” 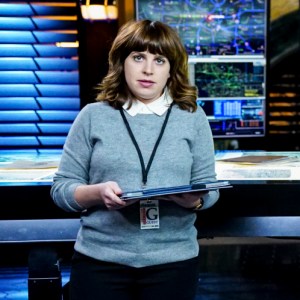 Brought in to assist with the investigation of mysteriously slain CHiPs, “Sydney bombards Nell at work and bosses her around effectively — as the older sister would do,” Smith previews. “I am an older sister and my younger sister has to deal with me, so it was a bit of me getting a taste of my own medicine!”

Despite butting heads, Smith says Nell and Sydney are “most definitely” cut from the same cloth. Being “Type-A, sharpest tack-in-the-room overachievers,” they combine to form “your friendly neighborhood information station — the exposition twins!” And speaking of exposition, with Syd’s visit viewers will learn what Nell’s real name is. “She’s kept that under wraps for quite a while…,” Smith teases.

After she filmed her final Nell/Sydney scene, Smith says director John P. Kousakis “sent me a message saying it was his favorite scene that he’s directed so far in his career, which was really nice. I think its one of my favorite scenes in this series, aside from a memorable one I had with Miguel Ferrer (who played Owen Granger until his death last January) in Season 6 or Season 7. But this one is up there. It’s going on ‘the NCIS: LA reel!'” 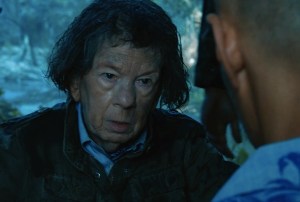 Season 9’s larger arc, of course, involves the search for Hetty (played by Linda Hunt), who is currently being held prisoner in Vietnam and is about to be put up for auction to the highest bidder. “She is coming back,” Smith reassures without disclosing the timetable. “Nell plays a major role in finding her and uncovering that mystery.” Before that awaited reunion with the team goes down, though, Smith shares this intel gleaned from a lunch date with Hunt: “She just recently shot a scene with a 500-lb. tiger! Linda is beyond brave.”

While we had the NCIS: LA vet on the phone, we invited her to spill some secrets from the set — including who from the cast smells like the most amazing waterfall. 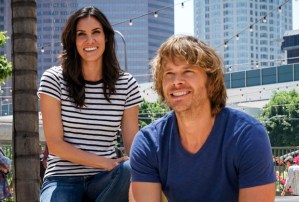 TOP TRAILER: While Eric Christian Olsen’s new Airstream, outfitted by Pendleton, gets points for style (“I’m totally jealous of that situation!” says Smith), Daniela Ruah proves that sometimes size matters, retreating as she does to a supersized trailer that accommodates her two kids when they visit. “People were joking that it’s called the Death Star, because it’s this huge, black motor home,” Smith says. “The kitchen is like the size of one you’d find in someone’s home. Her kids are running around loving it.”

MOST MUSICAL: Eric’s portrayer, Broadway baby Barrett Foa (Mamma Mia, The 25th Annual Putnam County Spelling Bee), “and I are constantly making a musical out of life,” Smith says. “We’re always turning something into a song, though that’s not much of a secret.

BIGGEST PHONE-AHOLICS: “A lot of us are guilty of that — ‘tech neck’ is a problem on set, for sure,” Smith says of chronic texters/Instagrammers. “I’ve been trying to make an effort to leave my phone in my trailer for at least half the day.” 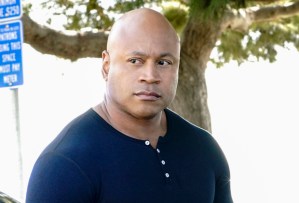 SIMPLY SCENT-SATIONAL: Surpassing any of the ladies on the cast, the best-smelling cast member is “definitely Todd, LL Cool J,” Smith reports without hesitation. “He has this very fresh scent. I don’t know what it is, and it’s not overwhelming, but when he walks in the room, he just smells like a waterfall or something.”

BEST NOSE FOR NIBBLES: When it comes to have a sixth sense for fresh fare being put out at the craft services table, “Barrett and I are all over it. We’re a big fan of Soup Day or Make Your Own Salad Bar — any kind of activity where you’re kind of involved in making your food.” 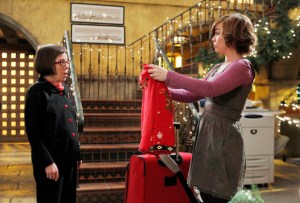 BEST STORYTELLER: As hinted earlier, “Linda [Hunt] is a hot lunch date — I have such a love for her, and when we have lunch, that’s when I get some of the ‘juicy tidbits, the history lessons'” from the Academy Award winner’s past. “She told me a story once about the first time she was living in New York by herself, and how she took a taxi to the middle of Times Square and it felt like that Mary Tyler Moore moment where she threw her hat in the air,” Smith relates. “I was crying, at lunch, because no one tells a story like she does. Also, just thinking about starting out in those early days, asking herself, ‘Can I do this?’ And she did, she definitely made it.”

Smith can be seen in the film festival award-winning indie The Relationtrip, which she also co-wrote and co-directed, hitting theaters in January.