Question: I’m loving The Good Doctor. Given that it is a David Shore show, is there any chance any House characters might at some point pop in for a cameo? —Matt
Ausiello: I doubt we’ll see any characters from House, since Universal owns those, but I would not be surprised at all if an actor from the original show were to check in at some point. (Robert Sean Leonard would fit in nicely at San Jose St. Bonaventure, no?) In the meantime, I hear one of the rookie hit’s full-time docs will be checking out in the near future, and his/her controversial onscreen exit — which may or may not stick — will set the stage for a big midseason storyline.

Question: I would like some Juliette- or Deacon-related Nashville scoop, please. —Theresa
Ausiello: The show is searching for an actor to play Jim, a 70-something, lifelong alcoholic who’s recently gotten sober and is trying to rebuild a relationship with his son. But given that Jim is also described as “crusty, frustrated” and a “would-be musician who resented his son’s success,” we’re not sure that reconciliation is going to go so smoothly. Sounds an awful lot like Jim could be Deacon’s oft-referenced drunk dad, doesn’t it? And given news that the show is coming to an end, what better time for a father-son reunion? 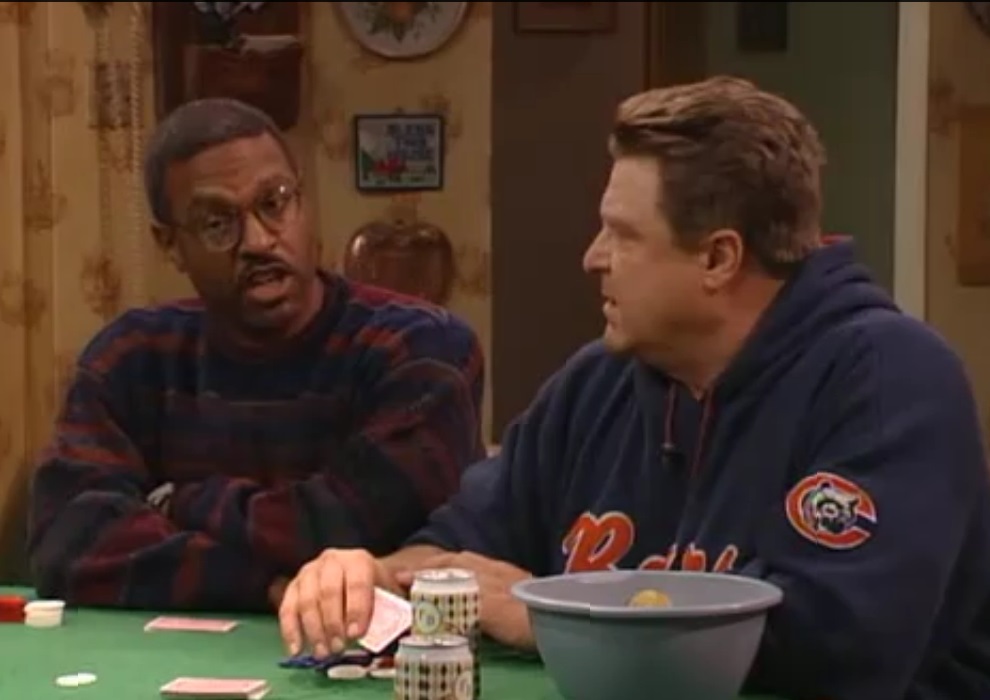 Question: Any spoilers for the Roseanne reboot? —Lisa
Ausiello: Guess who’s returning? No, it’s not Johnny Galecki’s David. (Sigh… ) It’s Chuck! You know, Chuck — Dan’s poker buddy/BFF played by Grey’s Anatomy vet James Pickens Jr. (see vintage pic, right) in a total of 19 episodes over the course of the classic comedy’s original nine-season run. Sources confirm that he will appear in two of the revival’s nine episodes. BONUS SCOOP: The series’ original go-to director, Emmy winner Gail Mancuso, will helm one of the new episodes, and that makes this Roseanne fanboy/nerd deliriously happy.

Question: Any scoop/spoilers regarding Jack Kline on Supernatural? Alexander Calvert is doing a smashing job in the role. —Karen C
Ausiello: Although Jack is focusing on himself after this week’s episode, he hasn’t forgotten about his pals the Winchesters and their quest to free Mary from the apocalypse world. “You’re definitely going to see Jack try [to open up the portal],” Calvert shares. “He knows, ultimately, that the thing that’s driving Sam and Dean is their mother, and the way that Jack can be of service to them is to open that up and help Sam and Dean complete their journey.”

Question: On Chicago Fire, are we ever going to get that “Dawsey” weekender we were promised in Season 4? —Rachel
Ausiello: “I feel like I wrote myself into a corner on that one,” showrunner Derek Haas confesses, before acknowledging that “fans don’t always get what they want.” That said, the ill-fated getaway is “mentioned again” in an upcoming episode. So there’s that!

Question: Any good Felicity and Diggle scenes coming up on Arrow? —Ryan
Ausiello: How about Felicity, Diggle and Oliver scenes? David Ramsey hints that the OTA relationship becomes “a big story point,” while Stephen Amell says that “in an upcoming episode we discover that there’s a fracture” within the superhero group, which “threatens to split Team Arrow down the middle — [between] the original members and the newbies.”

Question: Will Iris ever be able to use her degree on The Flash? —SSH
Ausiello: Bigger mystery: Does Iris even still work at Central City Picture News? “It’s a great question that I don’t think I even know how to answer,” Candice Patton admits. “In my mind, I will always say, ‘Yes.’ I love Iris as a reporter. I will always hold out hope that we’ll see a future version of that on the show. That’s innately who I think that character is. I like to think that right now, she’s helping out Team Flash in a way that[‘s necessary] and, eventually, she’ll get back to reporting about all the stuff going on in Central City.” 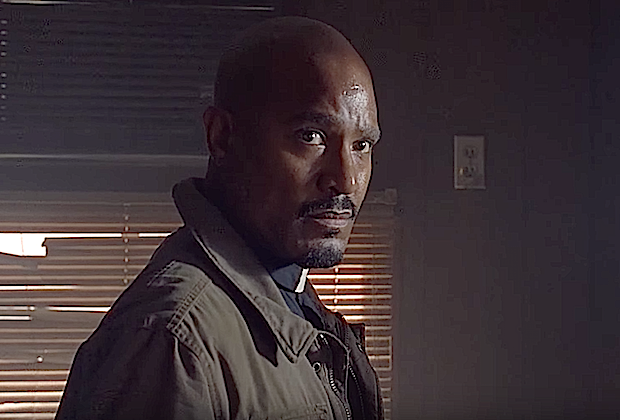 Question: Got any Walking Dead tidbits? —Brody
Ausiello: Always. Remember way back in the Season 8 premiere, when Gabriel found himself holed up in Negan’s RV with the Saviors’ leader himself? Sunday’s “The Big Scary U” (AMC, 9/8) not only reveals whether the preacherman was forced to make use of his s—tin’ pants, it reveals which character ought to be slipping into their own pair next.

Question: Next time you talk to Krista Vernoff, can you ask her why, in Grey’s Anatomy‘s 300th episode, we never got to actually see Ben lower the boom on Bailey with regard to his big career change? It seemed odd that such a huge moment was played off screen. —Diane
Ausiello: “Because the audience was ahead of Bailey,” Vernoff explains, “and when it came time for me to write that scene, every way I tried to write it it felt like old news. And I thought the more interesting piece of that story was the fallout.” (For more Grey’s scoop, scroll down to This AAnd That.)

Question: Any info on James’ new love interest on Supergirl? —Saranda
Ausiello: It sounds like James will be mixing B with P now that Lena Luthor is joining CatCo as his new boss. “You’ve got this sort of antagonism between the two of us [because] we’re still not quite sure of what our professional roles are,” Katie McGrath says. “And then layered in on top of that, obviously, is the added fun of our professional roles getting a little bit shady because of personal feelings. So I think as the season goes on, that is going to come more into the forefront.”

This AAnd That…
♦ The big (unfortunately telegraphed) Kate Burton cameo in Grey’s Anatomy‘s 300th episode almost didn’t happen. According to co-showrunner Krista Vernoff, “I originally pitched [Shonda Rhimes] the idea of superimposing [old footage] of Ellis into the O.R. and show her standing next to Meredith.” But Rhimes promptly told her to go out and get the real thing, a request Vernoff was more than happy to grant. “Actually bringing the actress” made it so much more powerful, she notes. (Totally agree.) 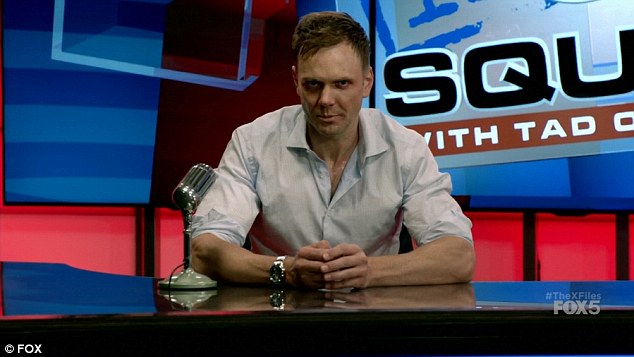 ♦ Don’t be surprised of Joel McHale’s incendiary X-Files pundit Tad O’Malley rears his ugly head in the second revival. “If he shows up,” series creator Chris Carter tells me, “it would be in Episode 10 [aka the finale]. But I’m not sure yet.”
♦ Happy! is a total mind-frak of a series that will do for Syfy what Mr. Robot did for USA Network. It also features Chris Meloni’s best work to date (and, yes, I’m including Oz). (Watch the trailer.)
♦ My gut misled me. Fred Armisen is not playing Carol’s brother on Last Man on Earth, as I had theorized. He’s playing * *a****** ****a* ****e*. And it’s six shades of perfect.