After years of fighting labels and resisting treatment, Crazy Ex-Girlfriend‘s Rebecca Bunch finally got a new diagnosis this week to help her address her mental health issues. But as we know, “the situation’s a lot more nuanced than that,” right?

Having survived last week’s harrowing suicide attempt, Rebecca was worried she’d be put back on heavy medication, but her new therapist Dr. Shin (The Catch‘s Jay Hayden) told her he actually thinks she’s been misdiagnosed for years, giving Rebecca a burst of hope and optimism. But when Dr. Shin told Rebecca he believes she has borderline personality disorder (BPD), she looked it up online and found a bunch of horror stories about how difficult it can be to treat. She turned to her old therapist Dr. Akopian for a second opinion, but when they went through a checklist of BPD symptoms together and Rebecca had all of them, she finally came to terms with it and agreed to start the long, hard treatment process. 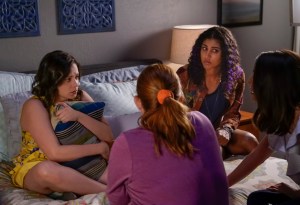 Putting a specific name to Rebecca’s illness was “really something we’ve been talking about for a long time,” showrunner Aline Brosh McKenna reveals. “We did a ton of research and talking to people to really kind of get that diagnosis across.” They didn’t have a specific diagnosis in mind for Rebecca when the series began — “we wrote her by feel for a while” — but “as we looked into it, so much of this seemed to resonate for her… she really has a lot of the classic hallmarks of this behavior.” (As McKenna points out, this week’s flashback clips illustrating her BPD symptoms are all from previous episodes, and “we have ten for each of them,” even though “that was before we really knew.”)

Rebecca accepting her diagnosis is “a big step forward in her maturity,” McKenna says, but she cautions that “as with any diagnosis, it doesn’t mean that you don’t do it anymore… It’s not like she found out she has pneumonia, and she can take a pill and be done. The treatment for this is very difficult, and there’s a lot of backsliding involved.” But we will see Rebecca working diligently on this in group therapy in future episodes, she teases: “She is an ‘A’ student, so once she has an assignment, she tries to take it on.”

Before Rebecca learned what her diagnosis is, she was overjoyed to finally have a name for what she’s dealing with, singing about it in the upbeat song “Diagnosis.” McKenna calls it “probably the most serious song” they’ve done; “there really isn’t a comedic hook” to it, she notes. But it definitely packed an emotional punch for her: “I cried the first time that [star] Rachel [Bloom] played it for me. It really is her hope. She’s so hopeful. That’s the thing that gets me every time.” 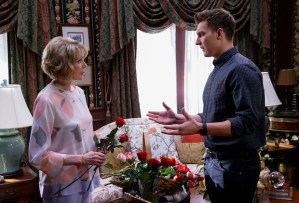 Nathaniel had an emotional storyline this week as well, as Rebecca’s suicide attempt drove him to examine what happened with his own mother when he was young. “He’s, in a funny way, one of the most accepting of [Rebecca’s] past,” McKenna says. “I think now we kind of understand a little better why he’s so comfortable with Rebecca, that this echoes certain things about his own past.” Paula, too, connects with Rebecca because of her own painful upbringing — which we’ll learn more about when Paula goes home to Buffalo next episode — but their friendship does get a little, um, intense at times. It’s “not a completely functional relationship,” McKenna admits. “There’s a lot of love there, but they’re always trying to figure out their boundaries.”

And what about Josh Chan, who Rebecca spent the past two-plus years obsessing over? Her moving on and realizing he’s not the root of her problems — this week’s episode is entitled “Josh Is Irrelevant,” after all — is a devastating blow to Josh’s ego, McKenna hints. He starts to ask himself: “‘Who am I if I am not Josh Chan, this object of adoration by this fabulous person?’… I have to say [Vincent Rodriguez III] starts to quietly steal some of these episodes coming up, because he plays that confusion, and he really starts to have his quarter-life crisis now… it’s tough stuff coming for Josh.”

But Rebecca isn’t completely out of the woods, either, McKenna warns. This show is, at its heart, a romantic comedy, and “for Rebecca, love is her drug of choice, right?… So she has to learn how to get love in her life in a healthy way, which is obviously very challenging for her.” In fact, she hints that “if [Rebecca] messes up with that going forward,” it might have “serious consequences for her.” Uh-oh… that sounds ominous, doesn’t it? If you don’t mind, we’re gonna seek comfort in the arms of our stuffed alligator, Ruth Gator Ginsburg.

What’s your take on Rebecca’s diagnosis, and where Crazy Ex heads from here? Drop your thoughts in a comment below.