Thanks to How to Get Away With Murder‘s fall finale, here are four more letters we can add to ABC’s #TGIT lineup: O. M. F. G.

It was made clear, as early as September’s season premiere, that something bad would go down in the lives of Annalise Keating and everyone close to her. But even though this show has gone to some dark places before — Sam Keating getting bludgeoned with a Lady Justice trophy! Asher running over Emily Sinclair! That visual of Wes’ half-burned corpse! — Thursday’s midseason ender was harrowing on a whole new level. (The episode even kicked off with a viewer discretion warning, due to graphic images, which was… highly necessary.)

But even though the episode filled in most major blanks about what happened on the night of the Caplan & Gold party, there were a handful of scenes from the Season 4 flash-forwards that weren’t revisited at all during this hour. For those resolutions, we’ll have to wait until Jan. 18, when the show returns.

For now, let’s break down the questions that were answered in Thursday’s broadcast.

WHICH CHARACTER WAS GETTING EMERGENCY SURGERY? | That would be Simon. By the time the Caplan & Gold party rolls around, everyone in Laurel’s circle has learned about the plan to swipe Tegan’s key card and get access to the Antares files. Oliver tells Connor, Connor tells Annalise, yadda yadda yadda. So, it’s no surprise that when the time actually comes to get those all-important files from the server, everything falls apart. The most unexpected plot twist? Simon’s confession that he has romantic feelings for Oliver. He’s not entirely sure what that means for his sexuality and all, but he knows he’s crushing hard on Caplan & Gold’s resident IT nerd, thus the reason he’s such a jerk to Connor all the time. Turns out he’s just jealous and bitter!

But I digress. The reason Simon’s confession is such a big deal is that it leads to a crucial change in the plan to get those Antares files. After Oliver has successfully gotten all the data onto Laurel’s hard drive (which is the result of a heart-rate-spiking, spy movie-esque hacking scene), Asher suggests that Oliver plant Tegan’s key card on Simon’s person, instead of returning it to Tegan’s clutch purse. Since Simon has already admitted his feelings, Oliver should pretend to lean in for a kiss with Simon and sneak the key card into his pocket while doing so, thus laying the groundwork to frame Simon as a whistleblower. What could go wrong!

As it turns out, everything. Because when Oliver goes upstairs to find Simon and give him a faux-smooch, Michaela, Asher and Laurel hunker down in an empty Caplan & Gold office to discuss the new plan. And juuuuust as they mention Simon’s name (and their scheme to plant Tegan’s key card on him), Simon himself walks into the room, having overheard a few key phrases that piqued his interest. Laurel tells Simon she’ll pay him as much money as he wants if he just keeps his mouth shut about the conversation he overheard — but Simon instead wrenches Laurel’s purse off her arm to see what she’s got inside. And she’s got a gun. Laurel, Michaela and Asher frantically try to diffuse the situation, now that Simon is brandishing a gun in all their faces, but it all goes south in a matter of seconds. Michaela steps toward Simon, trying to get him to lower the weapon, and Simon takes a step back. He trips over an office chair, accidentally pulls the trigger during the furniture collision and shoots himself in the head, falling to the floor as blood immediately pools under his cranium.

Michaela, having come a long way from her panic attack on the night Sam Keating died, pulls herself together long enough to send Laurel home in a taxi and stage the scene so it looks like Simon’s gunshot was intentional. She wipes down the weapon, returns it to the floor next to Simon’s body and attaches Tegan’s key card to his jacket, before heading back to the party in a blood-soaked dress, screaming that Simon had a gun. (Simon, as we already know, ends up on the operating table at the hospital, but he flatlines during surgery. Whether or not he’ll be pronounced dead in the Jan. 18 episode is another matter.)

WHY IS ASHER IN A JAIL CELL? | This part happens quickly. Once the police arrive to investigate the Caplan & Gold office where Simon shot himself, a detective approaches Asher and asks if he was a witness to the crime that took place. Next time we see Asher, he’s getting taken away in handcuffs — but it’s not revealed to us what took place in the few minutes between the detective approaching Asher and Asher getting arrested.

WHOSE BLOOD IS IN THE ELEVATOR? | Laurel’s, and I certainly hope you weren’t eating the last of your #TGIT popcorn during this particular scene. After Annalise finds out about Laurel’s Antares scheme, she calls her former student and tells Laurel to come to her hotel apartment, which Laurel does. But as soon as Laurel gets into the building’s elevator, bright red blood begins running down her legs, signaling a major problem with her pregnancy. (Earlier in the episode, after Frank and Connor were pulled apart from a physical confrontation, one of the men accidentally elbowed Laurel’s baby bump, leading her to the disaster she’s finding herself in now.)

As more blood pools at her feet, Laurel begins having contractions — but the elevator, which has been faulty throughout the entire episode, gets stuck. Laurel can’t get the doors to open on any floor, and she doesn’t get strong enough cell service to call 911. So, in a scene that ranks among Murder‘s most difficult to watch, Laurel gives birth on the floor of the elevator before passing out, with her child, who isn’t breathing, next to her.

Having taken the stairs to get to her hotel room, Annalise hears Laurel’s screams from the elevator and is able to get the doors open shortly thereafter, revealing an unconscious Laurel lying in her own blood — and that’s when Annalise notices the baby that Laurel is holding. Surely battling memories of her own stillbirth, Annalise frantically calls 911 and sobs while the operator talks her through saving the baby’s life. She’s able to get the child out of Laurel’s grasp and cut his umbilical cord — but her initial attempts at CPR on this prematurely born baby don’t seem successful. She keeps two fingers on the baby’s chest and counts out compressions, crying, “Live. Live. Live,” (hello, episode title!), but after several minutes, it seems there’s no hope… until, just as the screen goes black and the Murder title card appears on the screen, we hear the sound of a baby wailing. 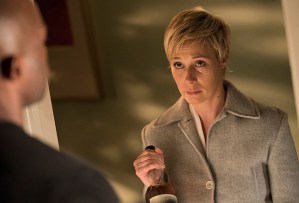 The episode doesn’t catch up to some of the other flash-forwards we’ve seen, including Laurel’s baby-related panic at the hospital, or Bonnie’s examination of the crime scene at Caplan & Gold. But we do learn a few more things throughout the hour:

* Early in the episode, Bonnie arrives at Annalise’s apartment and confesses that she was responsible for Isaac going on the stand at last week’s certification hearing. But after assuring Annalise that she got Isaac subpoenaed to help her, Bonnie admits that she loves Annalise — and, from the sound of Bonnie’s confession, the love isn’t just platonic. She urges Annalise to believe that the two of them can love each other, and maybe they can finally move past all the awful things they’ve done to one another and be happy. “I’m scared of you,” Annalise replies. “Get out before I call 911.”

With tears in her eyes — her most natural emotional state, at this point — Bonnie goes to Nate’s apartment for “one of our AA meetings.” She pours herself a few drinks and cries about Annalise’s rejection, before asking Nate, “How did you get over her?” Nate responds, “I’ll tell you when I do,” before leaving the couch to order pizza.

* Annalise pays Isaac a visit to tell him that she still wants him to treat her. Despite the multiple ethics violations, she’s not going to report him to the board; she just wants him to keep helping her, because he’s the only person who really understands what she’s gone through. But Isaac protests that he can’t be her therapist, and he won’t tell her the real reason why. (For the last two episodes, it seems like the writing has been on the wall: He’s in love with her, right? But he doesn’t say that. He simply hints to Annalise that she’s getting too close to him, and his personal struggles, to be his patient.)

* After Simon’s death at the party, Connor takes off and goes to Laurel’s apartment, where she was headed before relocating to Annalise’s hotel. Upon arriving at the apartment, he calls Michaela to inform her that Laurel is nowhere to be found — and as he foolishly rambles on, in the freaking stairwell, about Laurel’s grand scheme and all of the terrible things that occurred that night, the camera pans to the bottom of the staircase, where Jorge Castillo’s associate Dominick (aka Wes’ actual murderer) is eavesdropping on Connor’s conversation.

OK, your turn. What did you think of Murder‘s fall finale? Which scene shocked you the most? Hit the comments section with all of your thoughts.