This week on The CW’s Arrow, we got the missing pieces of Deathstroke’s origin story, while in the present day Slade struggled with his “new” son. Elsewhere, Diggle discovered his connection to a new villain.

Reunited under less than optimal circumstances, Slade and Kane fka Joe agreed they had some catching up to do. After learning that his son’s merc mission involves a lucrative “reassignment of resources,” Slade appears game to join along, despite a hidden Oliver’s warnings. In the course of intercepting a Semtex transport, Kane notices that his dad missed a kill shot, to which Slade blames his lack of depth perception. Whatever the case, Kane has a gift for dear ol Dad — Oliver Queen — and the prospect of exacting “an eye for an eye.” Slade for a long minute seems tempted to strike down Oliver with his blade, but instead he slits his zip ties, allowing his friend to KO Kane and then shoot their way out of the hideout,

Slade and Oliver then set out to stop Kane and his crew from attacking a country’s water supply, leading to a face-off between father and son. And it was a doozy, if only because of the truth that got dropped. After Slade argued that the father Joe sought to emulate was one hopped up on mirakuru, Joe revealed that he saw his dad kill long before that, during their camping trip. And, so much worse, months after that Joe made his first kill… of his brother Grant! Kane escapes after getting winged by Oliver. Slade later bids Oliver adieu, saying he is going to keep searching for both sons, “Kane” and Joe.

But just as compelling as the Wilsons’ present-day story were the flashbacks to seven years ago, when ASIS first found Slade washed up on a Philippine shore, after his time on Lian Yu and the Amazo. Recovering from his lost eye, Slade proceeded to train with ASIS anew, but was haunted and taunted the whole time by the spectre of Shado, who urged him to stop “hiding like a coward” and fulfill his promise by avenging her. That, plus the lasting mirakuru effects, led him to snap and slaughter the entire ASIS squad, before warning Joe not to get his way and then KOing his boy. 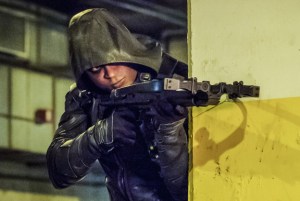 Diggle ran out of the illegal steroid he was using to manage his tremor, and had to go to the source to beg for more. That drug boss was Ricardo Diaz aka Dragon, the new adversary Team Arrow had come across during an earlier scuffle. After making the connection during a second encounter with Dragon’s team, and then learning their grand drug manufacture/distro scheme, Diggle came clean to Lyla about his injury and illicit treatment, the latter of which she has a hard time wrapping her head around. Diggle is prompted to turn over Diaz’s address to the team who then launch an attack — at the end of which, Diggle must watch the steroid supply go up in flames. Following a warm family moment back home, Diggle convenes with Dinah, Curtis and Rene to confess all and apologize profusely. Rene forgives Dig for letting him get shot on the bridge, while Curtis offers to fix his pal with some tech. In private, Diggle and Dinah agree to “no more secrets” — though she of course is keeping mum on letting her ex aka Vigilante flee last week.

As for Felicity, she had to defer Dig’s text to meet up, seeing as she and Oliver were reconnecting upon his return home to stories of grade-“A” science tests and “ice cream for dinner.”

What did you think of this week’s episode?