OK, so this season of You’re the Worst wasn’t the best. But just like Jimmy and Gretchen, it can pleasantly surprise you just when you’ve given up on it.

As Wednesday’s two-part finale opens, Gretchen is panicking. She spent the night in a hotel with Jimmy, but when she wakes up, he’s vanished. (Again.) She packs up between sobs, emptying the room’s minibar, but walks outside to find Jimmy waiting for her in his red convertible. He just popped out to grab breakfast, but that triggered her lingering feelings of abandonment — from, you know, when he left her on that L.A. cliffside — so she tells him to eff the eff off. (Again.)

She retreats back to Boone, whose daughter Olivia invites her to join them for taco night, but Lindsay ends up crashing the party, convinced that Gretchen is going to mess up that poor little girl’s life just like Lou Diamond Phillips messed hers up. She even hops into a garbage can, Oscar the Grouch-style, to tell Boone he needs to dump Gretchen before Olivia gets her heart broken. He assures her he knows exactly how terrible Gretchen is, though, and impulsively asks Gretchen to move in with him! And she says yes! (Yay…?) 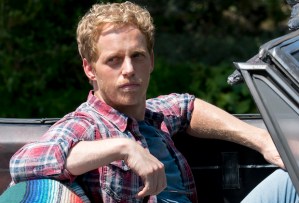 They drive off together, touring around L.A. in Jimmy’s ruined convertible and luxuriating in their shared awfulness. (Just like old times.) They do share a special bond, even after all the crap they’ve been through. But while they hang around drinking micheladas on another wind-swept L.A. cliffside, Gretchen spots all the junk Jimmy’s packed up and drops a bomb on him: She actually is moving in with Boone. (“He put himself out there,” she explains. Which, fair point.) Jimmy is clearly hurt, but he says he’s moving to Florida to swim in Hemingway’s pool anyway.

And that leads to maybe the most bittersweet exchange in You’re the Worst history: Jimmy tentatively offers, “If it’s possible, one day, I’d still like to know you, Gretchen.” And after a grin, Gretchen replies: “You know that’s never gonna happen.” Ouch… it hurts because it’s true.

But wait! After Gretchen goes back to Boone’s for a nice domestic evening, Jimmy bursts in and punches Boone’s ex-wife’s new husband Neil in the face, thinking he’s Boone. Jimmy then begs Gretchen to forgive him for abandoning her, and she explodes on him, detailing how his selfishness just confirmed for her how unlovable she is. She has an epiphany, and faced with a choice between Jimmy and Boone, she chooses herself, Kelly Taylor-style. But as Jimmy’s driving away, dejected, Gretchen jumps in front of his car and hops in. “You fought for me,” she explains. “And besides, you looked so sad when I left, I realized I have the power to destroy you, and why would I give that up?” Touché.

She gives him a firm slap across the face as payback, and after a romantic, end-of-the-movie kiss at a stoplight, she slips her engagement ring back on: “So what are we thinking, October?” And after an initial bolt of terror crosses his face, Jimmy relaxes: “Yeah, October could work.” Prepare yourselves for the Worst wedding ever, guys. 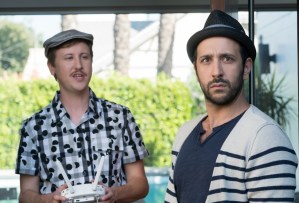 In other YTW news: Edgar reels from losing his writing partner Max — until he figures out the hipster dork was just trying to ditch him because Edgar’s PTSD war stories were too much of a bummer to listen to. And Lindsay discovers a new calling as “a helper, like that glove that makes hamburgers,” arranging a deal where her sister Becca agrees to carry a surrogate baby for her ex Paul to adopt, with Paul helping to pay for Vernon’s imminent malpractice suit for falling asleep during surgery. I kind of like Lindsay as a dopey fairy godmother granting wishes and solving problems, don’t you?

So what’d you think, Worst-ies? Season 4 was kind of a drag overall: It was just treading water until Jimmy and Gretchen got back together, and Edgar and Lindsay’s storylines never really went anywhere. But it finished strong, with a finale that had flashes of the wicked humor and heartbreak that made YTW so essential in the first place. I did kind of want to see Jimmy and Gretchen really split up; it would’ve made a nice series finale, with them both moving on. And I do feel bad for Boone — and Olivia, especially. But then again, knowing Jimmy and Gretchen’s gaping character flaws as well as we do, aren’t we all better off if they just inflict their damage on each other?

Now it’s your turn: Grade the You’re the Worst finale, and Season 4 as a whole, in the polls below, then hit the comments with your post-finale thoughts.