After Team Miley Cyrus took to the stage on Wednesday, The Voice whittled down its roster of contestants from 24 (including a quartet of Comeback Artists) to the 12 for whom viewers will finally be able to vote when the live shows start next week. Based on your responses in TVLine’s polls thus far, Season 13’s likeliest winners would seem to be Davon Fleming (Team JHud) and Jon Mero (Team Adam Levine). Based on iTunes sales, Noah Mac (Team JHud) tops Davon, and Addison Agen (Team Adam) tops Jon. And, given your impassioned defense of Chloe Kohanski, she can’t be discounted as a contender, either. Who from Team Miley joined the ranks of the frontrunners? Let’s rewind and review their performances, then you can debate it out in the comments. 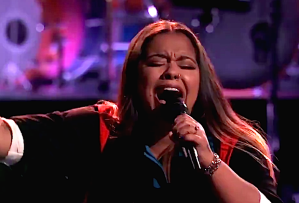 Brooke Simpson, “It’s a Man’s Man’s Man’s World” — Grade: A (advanced) | During Brooke’s rehearsal with her coach, we learned that she singlehandedly chose her song. In other words, we learned that she was damn good at choosing songs for herself. On stage, she gave the kind of elegant, jazzy, ballsy performance that Emily Luther had needed to give on Tuesday. By the time she was punctuating lines by whipping her hair, I don’t think there was anybody listening who wasn’t convinced that it was actually Brooke’s Brooke’s Brooke’s world.

Karli Webster, “Coat of Many Colors” — Grade: A (eliminated) | Nobody can say that Miley’s Comeback Artist was sabotaged by a bad song selection — in rehearsal, it sounded like the golden oldie was going to suit her as well as blonde hair does Dolly Parton. In the moment of truth on stage, Karli sang like a dream, pitch-perfect and as sweetly country as a square dance. Maybe her performance wasn’t as showy, shake-the-speakers-ish as Brooke’s, but it wasn’t in any way, shape or tone less impressive.

Adam Pearce, “Love Hurts” — Grade: B- (eliminated) | Hoping to bring out Adam’s vulnerability, Miley gave him this classic Nazareth ballad. But in rehearsal, he was sounding about as fragile as barbed wire — he didn’t sound bad, mind you, just not exactly heart-on-his-sleeve. On stage, Adam sang pretty fantastically, like his throat was lined with sandpaper. But I suspected he’d still knocked himself out of the Top 12 with those iffy “oooo, love hurts”-es that led into the choruses (and that was before he stumbled coming out of the bridge).

Ashland Craft, “When I Think About Cheatin'” — Grade: A- (advanced) | In rehearsal, Miley pushed Ashland to go for a note that she was scared to attempt, if she could even reach it at all. When she hit the stage, it appeared that she’d conquered the nerves that had tripped her up during the Knockouts. Perhaps not coincidentally, she also conquered the high note that had so worried her. In fact, she came off as so in her element that I couldn’t imagine her not continuing on in the competition.

Moriah Formica, “World Without You” — Grade: B- (eliminated) | Since Miley had always heard Moriah’s voice as being like Beth Hart’s, her choosing this song for the rocker was a no-brainer. And it sounded in rehearsal like it was going to go gangbusters. On stage, the teen regained some of the ground she’d lost in her dicey Knockout performance. She played her guitar like it was a weapon and cranked up the volume of her voice to its “I will not be denied” setting. On the downside, she didn’t always manage to maintain control of that big voice. 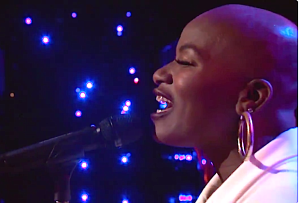 Janice Freeman, “Fall for You” — Grade: A (advanced) | Even just practicing her Leela James ballad, Janice was sounding so sincere, so soulful, so terrific, I almost pitied Miley — she actually was going to have a tough time picking just three contestants to advance to the Live Shows. On stage, Janice was freaking glorious. If she hadn’t already given starmaking performances on the show, this one would’ve sealed the deal. She was utterly in command of her gifts, dipping to nail crazy low notes and then erupting like a sonic volcano on the big notes.

So, they definitely saved the strongest team for last. Who did you think was the standout? Vote in the poll below, then hit the comments.