Where (or, when) is Timeless headed? Will Arrow romance be tested? Which New Girl guy is due for a “pop” quiz? Who in #OneChicago will be haunted by the past? Read on for answers to those questions plus teases from other shows.

Timeless: What’s in store for this cancelled but brought-back-to-life show? Any storylines involving certain historical events? —Eve
I can report that an early episode in the yet-to-be-scheduled Season 2 will take the Time Team to Hollywood circa the early 1940s, where we’ll meet actress Hedy Lamarr and composer George Antheil (who together famously developed a radio guidance system for Allied torpedoes), media titan William Randolph Hearst and Paramount Pictures boss Barney Balaban.

Lucifer this season has been lacking continuity. We still have no answers about the Sinnerman/Lucifer’s wings and face plot. Please clue us in on what is happening. —AdieM
The Sinnerman story (featuring The Leftovers‘ Kevin Carroll) “comes back with a fury” in the Dec. 4 episode, co-showrunner Joe Henderson reassures, “and carries us into our crazy midseason finale where we’ll finally get some answers… and ask a whole new batch of questions! I know people have been eager to get back to the Sinnerman story, and I promise, it’ll be worth the wait!”

Any info on a return date for New Girl? —Jill
Nothing definitive, but my money’s on late March or early April. I’m much more certain about what will go down in the final season’s fifth episode (of eight). According to sources, we will at long last be introduced to Winston’s real father. And in a fitting behind-the-scenes twist, Lamorne Morris will make his directorial debut on the episode. 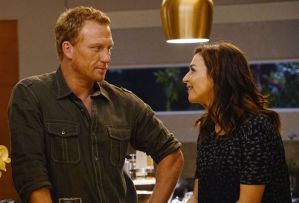 Grey’s Anatomy is just faking us out with Owen and Amelia’s breakup, right? — Brenda
Probably so. At the ABC drama’s recent 300th-episode soiree, executive producer Betsy Beers already seemed to be leaning toward an Omelia reunion. “I always loved the two of them together,” she said, adding, “I haven’t seen anything quite like this before on the show, where a couple’s together, but this brain tumor [alters one half of the couple’s behavior]. I’m fascinated to see how many other things are going to start to pop up” now that Amelia is tumor-free. Co-showrunner Krista Vernoff appeared to favor keeping the exes platonic going forward — but then slapped a telling “temporary” sticker on that relationship status. “They have earned a real friendship,” she suggested. “They walked through something really difficult together, and for now, at least, they’re in a place of connectedness and kindness. They deserve it.”

Any plans for bringing Lyla back to Arrow? —Hessa
Audrey Marie Anderson actually reprises her role as Diggle’s wife this Thursday — for better or for worse. As David Ramsey previewed, the secret of Diggle’s injury and sketchy treatment of same “will have to blow up, and it will, and Lyla will confront him about it, which is which is always interesting because you’re talking about the woman who is the leader of A.R.G.U.S. — talk about secrets! There’s always an interesting conversation between them about that.”

I’d love any scoop on Arrow‘s Thea. —Jenny
During our visit to the set last week, Stephen Amell said, “Willa [Holland] has been back with us recently…” — and not much else. “I don’t think it’s a big reveal to suggest that series regulars, when they are in comas, tend to wake up eventually…. But, assuming that Willa is back at a certain point, I think that there are some interesting things we can do for her character. I know I had an idea that I pitched today, actually.” 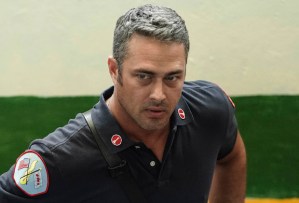 What’s next for Chicago Fire‘s Severide after the Hope fiasco? —Rachel
What’s next is a visit from his mom… and possibly the return of his dad Benny (played by Treat Williams)! “[Treat] did a movie which threw us off,” showrunner Derek Haas explains, “so the storyline we were going to have for him, we’re pushing until after the movie. We’re going to bring Severide’s mom into the picture in the second half of the season [for] a story that’s pretty involved, and if we can get Benny, it will be ideal, but it’s hard because [Treat’s] not a regular on our show.“

Will The Flash circle back to the mysterious symbols Barry was drawing? And was Barry’s line about “needing more diapers” a reference to the Tornado Twins? —SSH
After first emerging from the Speed Force in the season opener, Barry “was talking all over the place,” Grant Gustin acknowledged during our set visit, “and elements of that will show up throughout the season — and may already have” (such as when Joe randomly uttered, “This house is bitchin'” to a contractor). “We’ll circle back, I would imagine, at some point this season and connect all of them for you. But yeah, that was all very important, everything he said at the beginning of the year.”

When does Lexi Ainsworth appear on Major Crimes? —Vesper
The General Hospital vet’s multi-episode arc, as a prostitute whose youthful appearance draws out a sexual predator working in concert with Phillip Stroh, kicks off with Episode 10, airing Jan. 2, 2018.

Futon Critic has Criminal Minds’ season at just 13 episodes. Is that possibly right? Please investigate! —Jason
‘Tis investigated, and 22 episodes is confirmed as the Season 13 order.

Tell me you have something about Supergirl‘s Mon-El! I miss his face on my screen! —Rebecca
We have a big ol’ preview story coming up for the next episode, but until then, I can share that Melissa Benoist described his return as “mysterious,” adding that his reunion with Kara is very muchin keeping with the “different tone” of the title hero’s storyline this season. 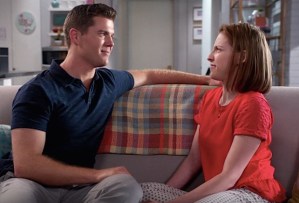 How much longer do we have to wait for The Middle‘s Sue and Sean to get together? —Keely
“Nothing is easy for the Hecks,” show bosses Eileen Heisler and DeAnn Heline reminded when I hand-delivered your question. “Patience,” they advised.

What’s on the horizon for Chicago P.D.‘s Halstead? —Monica
This Wednesday’s episode finds Halstead going undercover for a case, during which viewers will see “the effects of his military experience coming back to haunt him a bit,” showrunner Rick Eid tells TVLine. “Some PTSD is triggered along the way in the case that he’s involved in. We’ll see that play out over a few episodes.” That “interesting little arc” also introduces a new relationship. “Further on down the road, there’s a little romance for Halstead,” star Jesse Lee Soffer previews. “It’s not the healthiest relationship, but it’ll be fun for the fans.”

What’s coming up for Chicago P.D.‘s Burgess-Ruzek relationship? Should fans still hold out hope? —Lyndsay
“Don’t give up on them,” showrunner Rick Eid says. “I think it’ll always be complicated between them, but I don’t think the final chapter has been written.” In the meantime, Burgess is getting cozy with this guy.

What can you tell us about about Sara’s new love interest on Legends of Tomorrow? —Cat
Alas, Caity Lotz had little to dish during our visit to the set last week. “They keep telling me there will be [a new romantic interest],” she affirmed. “I don’t know if she will necessarily find love, but she is reflecting upon it. It is just really difficult to have a relationship when you live on a time ship.”

Real questions from real people get real answers! If you need the Inside Line on a favorite show, email InsideLine@tvline.com! (With reporting by Vlada Gelman)