The same as I suspect we all did, I tuned in to Tuesday’s Night 2 of The Voice’s Season 13 Playoffs with some trepidation. And by “some trepidation,” I mean “a whole hell of a lot of trepidation.” A few of Monday’s performances were so godawful — and included one that garnered what I believe was my first-ever F grade — it was like watching American Horror Story: Talent Show. And the coach’s decisions… oh my Lorde, what were they thinking? Jennifer Hudson sabotaged Chris Weaver with a lackluster song that derailed his freight train and allowed her to dump him in favor of Shi’Ann Jones, the promising but extremely green Mini-JHud. (And don’t even get me started on what she did to Lucas Holliday. If she didn’t really want to give him another shot, she could have made somebody else her Comeback Artist.) Then Blake Shelton gave Natalie Stovall a second chance to remind us why he shouldn’t have cut her in the first place — which she took and ran with — only to cut her a second time (!) in order to keep Chloe Kohanski, who’d sung in the same droning tone that my freezer makes right after it’s asked for last rites. If I hadn’t already been rocking a Homer Simpson two-strand combover, I’d have gone bald from all that head-scratching. On the plus side, the bar was set awfully low for Team Adam Levine, so there was almost no way that Night 2 could be as disappointing as Night 1. But, if we weren’t grading on a curve, were any of the performances A’s? Read on…

Adam Cunningham, “Have a Little Faith in Me” — Grade: B+ (advanced) | Blake Shelton had to be kicking himself extra hard, hearing Levine’s stolen artist do justice to his Joe Cocker cover. A much more wow-some, showstopper-y performance than Blake’s artist, Red Marlow gave Monday (who was quite good, just not “Whoa!” good). If he wasn’t already, methinks Adam just became a contender. 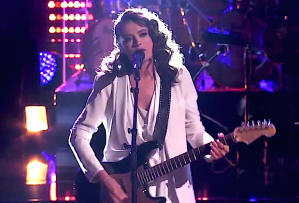 Whitney Fenimore, “If It Makes You Happy” — Grade: D- (eliminated) | In rehearsal, Adam’s Comeback Artist wasn’t sounding like her return engagement was going to be tremendously long. On stage, she was off from line 1 and got progressively worse, I’m afraid. This Sheryl Crow hit was most definitely not the right song for her — or, at very least, not the right key for her to attempt it in. Painful.

Emily Luther, “Lovesong” — Grade: B- (eliminated) | The minute Emily said in rehearsal that she wanted to “James Bond up” her version of Adele’s Cure cover, I got excited — that seemed like it would be too cool. Was it, though? Kinda yes and kinda no. The arrangement was wicked, but Emily herself wasn’t as pitch-perfect as I’d come to expect her to be (or as she needed to be).

Anthony Alexander, “Perfect” — Grade: C (eliminated) | I’d had such high hopes for Anthony after his brain-bursting Blind Audition, but since then, he’d let me down big time. Tuesday, he seemed a little more composed on stage; however, vocally, he was as shaky as a tree branch in a windstorm. “He can be really successful in music,” Adam kept insisting. And I believe that — once the teenager gets a whole lot better trained and more seasoned as a performer. 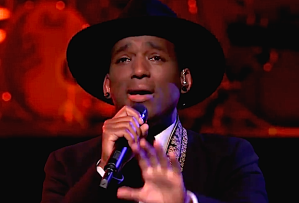 Jon Mero, “When We Were Young” — Grade: A (advanced) | “Yes!” I accidentally said aloud when Jon started singing. This is the kind of performance that we expect from this show (or at least that we want from it). Jon was totally in control of his vocal, and the vocal itself was freaking gorgeous — bell-clear and emotional. The moment he hit that high note, he won the night. And, for once, he wasn’t so cheesy that he made me crave nachos.

Addison Agen, “Angel From Montgomery” — Grade: B+ (advanced) | Contrast poor, nervous Anthony with this kid, and it’s not even a contest. Her performance wasn’t impeccable, but it was damn close. She sang with a voice as sweet as honey and, impressively, with the confidence of a vocalist twice her age. More accessible than Chloe, Addison might well develop into Season 13’s Lauren Duski.

So, what did you think of Team Adam? Who was the standout for you? Vote in the poll below, then hit the comments.