Friendly warning: This recap reveals the conclusion of American Horror Story: Cult. If you don’t want to get spoiled, for the love of Ryan Murphy, turn back now.

“You’re wrong. There is something in this world more dangerous than a humiliated man — a nasty woman.”

Those words, spoken by a pantsuited Ally Mayfair-Richards towards the end of Tuesday’s American Horror Story: Cult finale, are the last Kai Anderson heard before his brains were splattered all over the wall. (I know it’s not right to rejoice in someone’s murder, but I have to applaud Beverly’s marksmanship.)

But how did we reach this moment of sweet, sweet justice? Let’s go back to where last week’s episode left off…

Kai was devastated to learn that Winter wasn’t the real mole — one of his minions, codename: “Speedwagon,” was working with state police to take him down — and in his darkest moment, he nearly called off the Night of 100 Tates. But Ally encouraged him to fight on, to channel his rage and become the leader Winter always knew he could be.

Sadly for Kai, his pregnant-lady killing spree never came to fruition. Just as his men were preparing to hit the streets, the FBI — on a tip from Ally, with whom they’d been working ever since she was put in the psych ward — stormed the house, putting an end to the show’s titular cult. The only members not taken into custody were the ones who killed themselves before the feds had a chance to cuff them.

Eleven months and one gorgeous new girlfriend later, Ally was well on the road to recovery — until a call from Kai, in which he detailed the 16-man army he amassed behind bars, put her back on edge. The only way she could truly move on, it seemed, was to run for Senate and claim the very seat Kai once envisioned for himself.

With the help of a guard he was boning, Kai faked his own death and escaped from prison just in time to attend Ally’s big debate against the sitting senator. But when he finally made his way onto the stage to shoot her, he discovered that his gun was empty. (Kai may have been sleeping with that guard, but she wasn’t down with his “Divine Ruler” act, and she was very receptive during a secret meeting she apparently had with Ally.)

In the end, Ally won the Senate seat in a landslide victory, and while Oz feared that his mother might become a twisted leader like Kai, she assured him that she was meeting with “a group of a powerful, empowered women who want to change the system.” The episode ended with Ally taking a long look at herself in the mirror before slipping on a hooded robe. 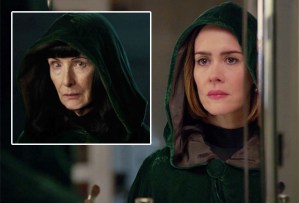 Actually, let’s talk about that ending for a second: When I first saw Ally’s robe, I let my mind run wild with possibilities. I even wondered if the group of “powerful” women Ally referred to might somehow be connected to Coven. (After all, didn’t series creator Ryan Murphy mention a Coven/Murder House crossover at some point?)

Then I took a step back, turned down the crazy, and recognized Ally’s green robe as a hand-me-down from Bebe, who considered herself “the final carrier of Valerie Solanas’ torch.”

Other things worth discussing:

* Who else gasped when Beverly said, “If she turned down Lana Winters, why would she talk to Rachel f–ing Maddow?” I guess this connects Cult with Asylum and Roanoke.

* It’s kind of amazing how Cult, which was already tied to current events when it premiered, became even more relevant as the season progressed. The shift in focus from political conflicts to larger gender conflicts felt oddly prophetic, given the growing number of sexual harassment allegations flooding the news cycle.

Your thoughts on the Cult finale? How do you rank this season compared to others? Grade the episode below, then drop a comment with your full review.