Talk about your denial stage of grieving! Six weeks after Blue Bloods blindsided viewers with the reveal that Linda Reagan died, off-season and off-screen, in a medevac helicopter crash, theories are still swirling as to how Danny’s wife could be “revived” — on, mind you, a broadcast TV show that is about as rooted in realism as you can get.

To be fair, a few TVLine readers have been able to take the tragic twist in stride, appreciating the surprise element that TV is so rarely able to deliver anymore. “Revealing it the way they did,” over the course of the Season 8 premiere, “gave it the most emotional impact,” opined one commenter. “I thought it was beautifully handled.”

A few others, meanwhile, would like to see Amy Carlson return if only for one episode, to flash back to that fateful day in late May. “We need to see helicopter crash and how she perished. Did she struggle. Did she call home?” said a commenter. “There are too many open possibilities.” Echoes another reader: “Please talk them into a flashback so your fans can have some closure.” (Carlson herself told our sister site Deadline that she’d be amenable to such an encore: “Of course I’d be open to that…. I never wanted [Linda’s story] to end that way, so I feel sad for the fans because everyone wants closure.”

Yet there are those for whom even a flashback episode would not suffice. No, they want Linda Reagan (and her contributions to the Sunday night dinners) back for good. “It is not the same since you wrote Linda off,” reads one of the 1,770 comments left on TVLine since the character’s shocking send-off. “You guys need to find a way to write her back in.” 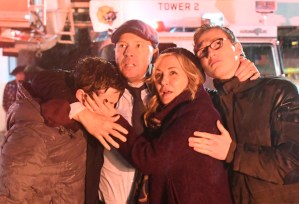 But maybe the Blue Bloods writers needn’t raise a single finger to their Smith-Coronas? Instead, they could take a cue from this curated list of TVLine reader “resurrection” ideas:

1 | “Just let it be a faking of her death to protect her from the same people that burned their house down.” —Elizabeth

2 | “They could say that the Mexican cartel kidnapped her and they somehow placed her identification in the wreckage, along with someone else’s body.” —Letty

[But who was the other body? A clone swapped in by Stefano?]

3 | “How about instead of her faking her death, the crash happened but Linda survived and if they get another actress to play Linda, the crash would explain any physical difference between the actress and Amy Carlson.” —Patricia 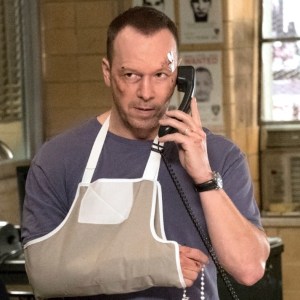 Sasha Alexander up to these days…?]

4 | “Bring her back like in Dallas. Danny could have been in a coma, and her death was all a dream.” —Janet

5 | “You could say that they mistook somebody else’s body as hers, while she got out and has had amnesia.” —Janice

[Taking that idea a step further….]

6 | “Maybe she was thrown from crash and a mountain man nursed her back to health, and she will return with amnesia!” –Cheryl

A handful of fans meanwhile are OK to let Linda’s death stick, but put an ominous spin on the helicopter “accident”:

“What if she was murdered? And what if over the season we get clues, as will Danny, that maybe her death was revenge from someone Danny put away?” –Mad Hobbit

TVLine reader Laurine meanwhile write almost half the script for her murder pitch. [Cue up “Unchained Melody” before reading.]

“What I suggest you do is have Danny stumble across something on her phone — text messages, voicemail, emails showing Linda was an unknowing witness to a major crime or string of crimes through a patient of hers. The helicopter crash killed her and said patient — two birds, one stone. Start with her sons having nightmares where she’s ‘reaching out’ to them, and then Danny too. The family solves the case Linda was dragged into and killed for. Then send me the check for writing this for you!”

Do you think the Blue Bloods show you have been watching for years would be able to pull off any of the above cheatings-of-death? Or do you have your own idea on how to bring Linda back, played by Carlson (which is unlikely) or a well-chosen recast?