Supergirl‘s Melissa Benoist and Chyler Leigh, as well as Arrow‘s Emily Bett Rickards and Legends of Tomorrow‘s Caity Lotz, have spoken out in favor of “changing the norm” that has allowed sexual misconduct to exist unchecked in Hollywood, following allegations against Arrow-verse exec producer Andrew Kreisberg.

Warner Bros. TV on Friday suspended Kreisberg — who serves as a co-showrunner on Supergirl and The Flash, but also holds an EP title on Arrow and Legends of Tomorrow — as the studio investigated numerous allegations of endemic sexual harassment and inappropriate physical contact (as first detailed by our sister site Variety).

In her statement shared on Twitter, Benoist begins, “I am a woman who leads a show that supports equality and feminism, empowerment, and fighting for what is right. I have always tried to conduct myself this way personally, as well. Sadly the show and my career are a part of an industry that doesn’t always mirror these sentiments.

“This is heartbreaking, and at times makes me feel helpless,” she continued. “I know I’m not the only one who feels this way. But I’m an optimist. I believe lasting change is possible, and when people are mistreated, they should have a safe forum to speak their truth and always be heard. And when people commit crimes or harass others they should always be held accountable — no matter what industry they work in or how much power they wield.

“I’ve spoken up about it in the past — publicly and not so publicly — and I’ll continue to do so. All of us should, without fear or shame,” she charged. “We all need to hold ourselves to a higher standard. So this week, I’ll head back to work on Supergirl even more committed to being a part of changing the norm by listening when people speak up, and refusing to accept an environment that is anything less than a safe, respectful and collaborative space.” 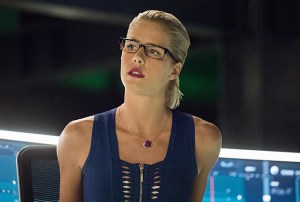 Rickards’ tweet came shortly after Benoist’s, but also hours after Arrow co-showrunner Marc Guggenheim alluded to “reverse sexism” possibly taking root in the wake of the Harvey Weinstein, Kevin Spacey and other such scandals.

“To the men who committed harassment, who perpetuated rape culture, who turn a ‘blind eye’ and complain about ‘reverse sexism’: you are weak and complicit,” Felicity’s portrayer wrote. “To the women who found the strength to speak up, to the women who supported one another and to the women finding their voice: You can. You are heroines.”

Later, Lotz tweeted that she was adding her voice “to the choir of support. You are the ones ushering in change that would allow all of us to work in an environment where we are respected and safe.”

To the brave women and men who are coming forward to condemn their abusers… I add my voice to the choir of support. You are the ones ushering in change that would allow all of us to work in an environment where we are respected and safe

Supergirl co-star Chris Wood also took to Twitter on Monday to express an “incredible amount of love and respect for every person who has been brave enough to speak out.”

An incredible amount of love and respect for every person who has been brave enough to speak out. I stand with you. ♥️ pic.twitter.com/O600GmrBsS